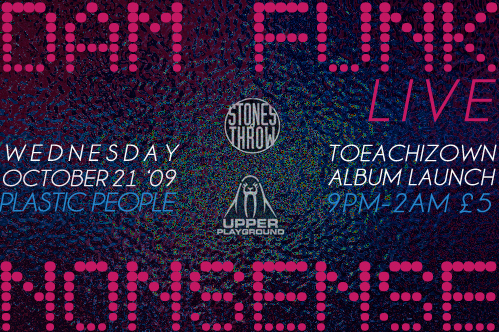 For those who are unfamiliar with Dãm-Funk, let me just say this; his music is sexy. You may be laughing right now, but wait till you listen to some of his tunes! His modern take on 80s funk/soul is the dictionary definition of sexy music.

“Known as Los Angeles’ “Ambassador of Boogie Funk,” Dãm-Funk represents the citizens of the Funkmosphere. Headquartered in the Leimert Park section of L.A., Dãm (pronounced: ‘Dame’ as in Damon) spent the last few years cultivating a musical renaissance rooted in the early-’80s styles known as Boogie, Modern Soul and Electro-Funk.

The next phase of the Ambassador’s mission is his debut album ‘Toeachizown’: continuing the classic West Coast tradition into today’s scene with Dãm’s own original “Modern-Funk” compositions.”

Check out Dãm-Funk’s MySpace and get inspired!

And in case for some mad reason that flyer isn’t clear enough for you, here are the details: