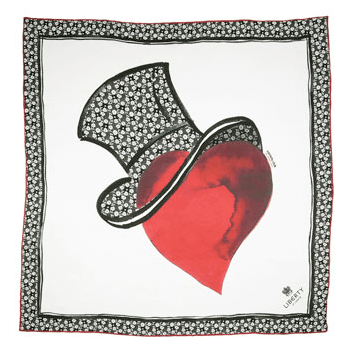 I’ve been playing with the idea of buying a pocket hanky, folding it in the style of a Victorian gentleman’s chest pocket accessory, and placing it in the back pocket of my jeans. Kinda like an old school British spin on the New York gangster look. I think it’s got a future in the UK streetwear scene.

Even if you’re not backing that little gem of an idea, you gotta admit that the silk hanky is a classic British fashion accessory that deserves respect. It’s been on the scene since day! Especially this one; not only is it a pretty rad design, it’s for a very good cause.

You can get your hands on this symbolic piece of silk in-store at Liberty’s or from their online store for £65.