Warning: "continue" targeting switch is equivalent to "break". Did you mean to use "continue 2"? in /nfs/c08/h04/mnt/122689/domains/thedailystreet.co.uk/html/wp-content/plugins/wp-author-box-pro/includes/ReduxFramework/ReduxCore/extensions/customizer/extension_customizer.php on line 442
 DC x Sixpack x PMKFA release (Part 2) 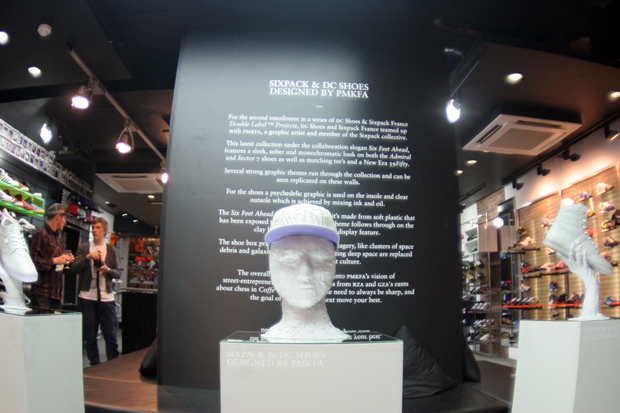 As part of the launch of the DC x Sixpack x PMKFA project, we sat down with the designer of the entire collection (PMKFA) to ask a few question about the project and himself. Micke, aka PMKFA, is a very relaxed and calming character, and whilst sat on a the newly refitted Size? bench seat he managed to create a sense of calm, even though he was talking about a project of mammoth size.

You can find the product images and details in part 1 of our coverage. 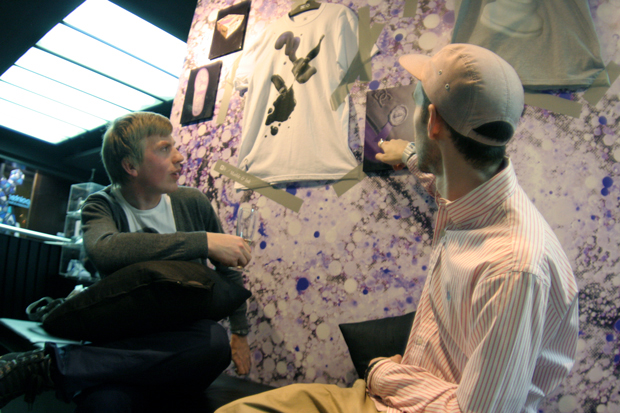 So, you were born in Sweden and now live in Tokyo, what’s it like living in Tokyo?
I’ve lived in Tokyo since 2005, it’s good, it’s certainly different to Sweden. What I like about Tokyo so much is that it’s really, really calm where we live, just one station from Shibuya which is like the most intense area, but it’s as calm as the countryside really – and then I bike 15 minutes to Oyama, the fashion district where I have my office, and it’s crazy, there are so many people. 5 minutes from the office there’s a huge crossing where about 20,000 people cross every hour…on average, so at rush hour it’s probably 40,000. That’s the beauty with Japan, you can be in very, very intense areas, but just a stone’s throw away it’s so calm.

How did this whole project start? How did you, DC and Sixpack all got together … Who was the first to ignite the spark?
It was me and Lionel (the boss of Sixpack), we met in Stockholm. By then we’d been working together for 1.5 years, but we had never met. We met in a hotel lobby where we had meetings every day for 5 days. At the end of the first day, Lionel said “I wanna ask you about a project…a big one”, to which I was like “Oh…what’s that?” and his response was “Wait.” (laughs), so I had to wait until the next day. He told me about the whole collaboration, with which DC had asked Sixpack to come up with artists and work collaboratively on a few items. I instantly really wanted to do it because I was familiar with DC through skateboarding as a kid and for me there was quite a lot of nostalgia involved. Also, the challenge of working with a big brand like DC, trying to find your own position and work on something that fits with what I was doing and what Sixpack was doing – it was a good thing. 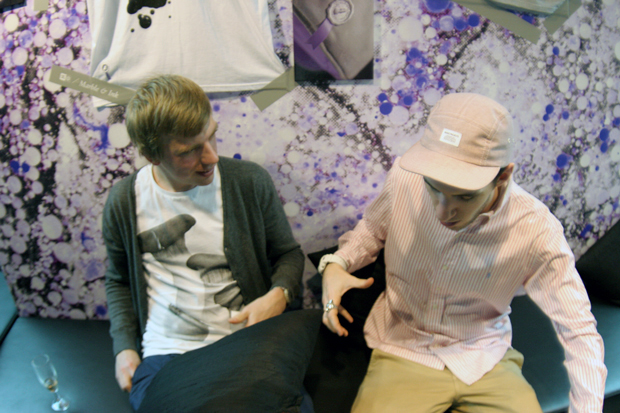 Where did your inspiration come from? What sort of things did you try to incorporate into the project?
My first reaction was to do something that was a big contrast between the outside and the inside. The outside was sober, clean and accessible, but you still had a shoe that had some character to it – in the detail and the sole. The sole, underneath the shoe, is the same as the insole, featuring a kind of psychedelic pattern. That was the first idea, Lionel and I discussed it a bit, and he thought we should go down that path as well.

Yourself and Sixpack have been working together for 3 years now, how did you first get together?
I got an email from Lionel, back when I had never heard about Sixpack. We started with a couple of T-shirts and it grew into patterns for sweatshirts and jacket lining patterns. Recently I’ve done a few shirts and I’ve started doing some original clothing, including a bag which isn’t out yet. What I like about Lionel and Sixpack is that they keep giving me new challenges. At the time when we started working, I hadn’t shown what I was capable of, and Lionel said “You know, I think you can work with clothes” and I said “Well it’s good that you think that, because I’m not sure myself!”. That I really like, when someone puts their trust in you, because then I put a lot of effort into giving something back that doesn’t disappoint.

You also run your own T-shirt label, It’s Our Thing, how’s it going?
I’ve been doing It’s Our Thing Since 2006, but it’s a side project really, I’d say 10-20% of what I’m doing. Unfortunately I don’t find very much time to do it. It’s a lot of fun though! It’s stocked at Urban Industry in the UK. We’ve got some new stuff coming out now, but it’s small and we’re gonna have to step it up soon. We’re gonna continue doing it, but we need to take a step up, I just need to find the time to do it! 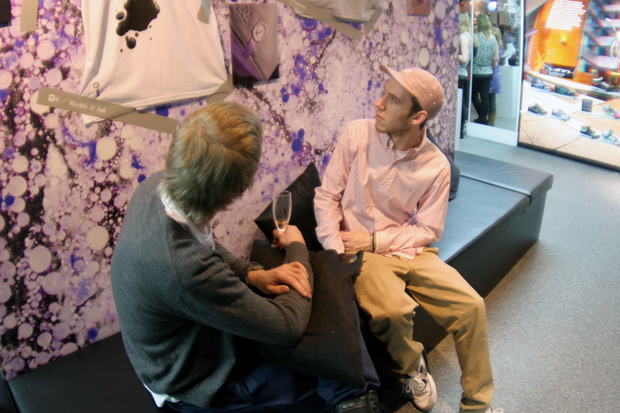 So, It’s Our Thing is stocked here in the UK and you’re working closely with Sixpack who are French. Is the European influence still important to you, even though you live so far away?
I think Europe is what impresses me most in the world and I think that what is happening here is very progressive. Japan has a lot to offer, but I think that it’s more like it has a lot of potential. Right now it’s mainly living on the legend of itself.

Is there anything that interests you about the UK in particular, outside of work?
I liked a lot of dubstep when that strarted – I lived here in 2003/2004 when that popped off. I used to always listen to Youngsta’s show on Rinse. I had this pocked radio and I connected it to my iBook that I had back then, and I recorded a lot of the sets. Where I lived in Newington Green, there was some kind of Christian radio station that had a really strong signal and would knock out Rinse all the time. For weeks I couldn’t listen to Rinse because this Christian music just knocked it out (laughs).

Finally, how do you feel about the project now that it’s all complete?
I’m very happy to see it materialised. It’s hard when it’s been going for such a long time, but it’s really refreshing to come here and see people interact with the product. I’m really happy with what we did with the column in Size? Carnaby. I’m particularly happy with the New Era, because that’s so much a part of what I’ve been doing in recent years, working with type as an illustrative element, I’m really happy with the way it turned out.