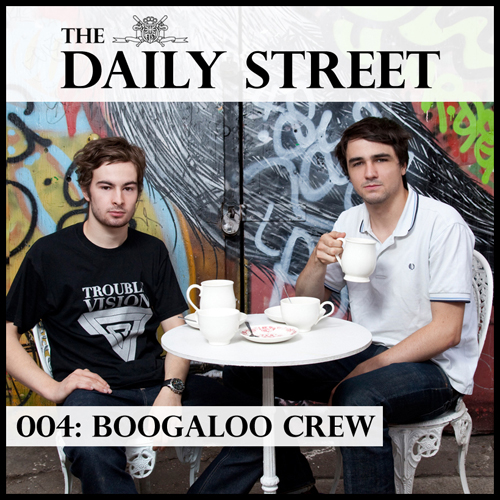 Mixtape 004 is brought to us by London duo Boogaloo Crew. Having smashed their way through the Dubstep and UK Funky scenes with killer remix after killer remix over the last year and a rather original sound, they have firmly established themselves as a force to be recognised.

Bringing a sound that fuses Dubstep with old UK Garage and new UK Funky/Underground House, it’s a refreshing sound that is smashing clubs at the moment. These guys also know how to rock a crowd on the 1’s & 2’s … I’ve seen it with my own eyes and it’s non-stop dancing. This mixtape is proof of their mixing talent and I would go as far as to say that the first mix is one of the best, most thought out mixes I’ve ever heard on a mixtape (It does help that the second tune is one of my favourites at the moment). The rest of the mix doesn’t disappoint either, spanning across a pretty large list of styles and sounds, including artists from Ramadanman to Burial to Massive Attack. As varied as the tracklist may look, it flows from track to track fluently, leaving you at the end questioning how 45 minutes went so fast. Overall a very enjoyable listen and a welcome addition to the series!

004: Boogaloo Crew by The Daily Street on Mixcloud