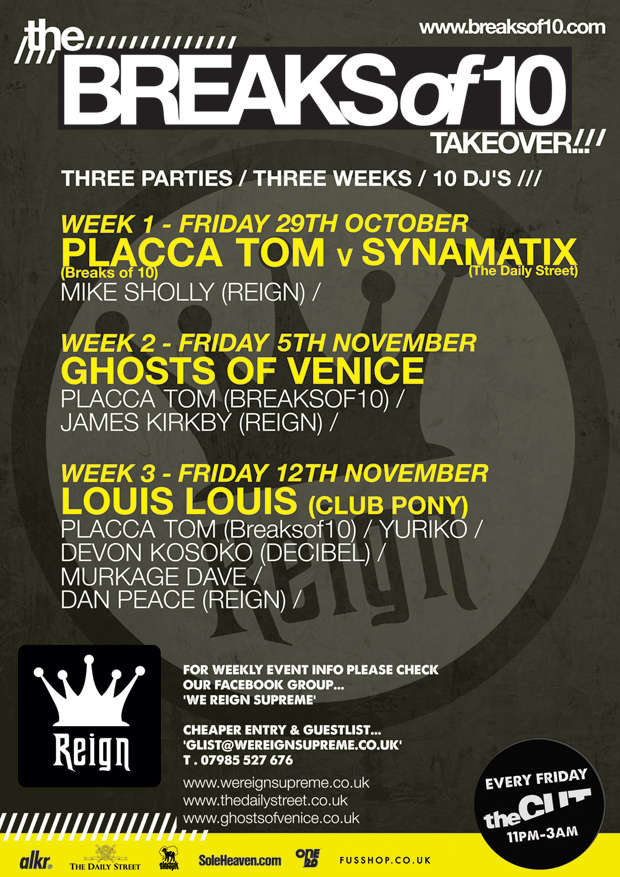 Yeah you heard! We’ve been challenged by the BREAKSof10 boys up in Newcastle to battle them on their home turf. IT’S ON!!

If I’m being honest, It’s a shame that this is happening … I like the guys behind BREAKSof10 and now we’re going to have to publicly embarrass them in their home town. Ah well!

Right, enough of the fighting talk and more facts: It’s a 3 hour set up between BREAKSof10’s Placca Tom and myself, Synamatix, repping The Daily Street. With 1 hour each to rip up the dance floor and an hour of B2B battling in between that, it’s gonna be fire! Placca Tom will be bringing his usual mix of Crack House and heavy hitters, whilst I will be drawing for the UK Funky, Garage and Dubstep. It’s gonna get pretty heated so you lot in Newcastle best be ready to dance!

Joining me for moral support and photographic skills will be our very own Suffocake. As for team TDS, that’s it … so we’re expecting you lot to turn out and support whilst we battle it out on foreign turf. Feel free to bring home made “WE LOVE TDS” banners and t-shirts etc.

Click attending on Facebook and get yourselves down to Reign at The Cut in Newcastle this Friday (29th October) for some dope tunes and good times. Also, if enough people comment on this post asking for it … Suffocake will host the night on the mic (he doesn’t know this).

What You Got!? Sneakers Battle