Warning: "continue" targeting switch is equivalent to "break". Did you mean to use "continue 2"? in /nfs/c08/h04/mnt/122689/domains/thedailystreet.co.uk/html/wp-content/plugins/wp-author-box-pro/includes/ReduxFramework/ReduxCore/extensions/customizer/extension_customizer.php on line 442
 Nike Air Max LeBron VIII (Black/Red/White) So it’s that time of year again. In fact it’s today that the NBA kick starts it’s season with the opening match between Boston and the newly reformed and reloaded Miami Heat. In terms of the NBA, it’s been a huge summer. We had the ‘Decision’, which saw ‘King’ James duck out of Cleveland and join a potential dynasty in south beach with the Miami Heat, and a huge shift of power from the West to East coast division.

It’s always an interesting time of year for basketball shoes with all the player exclusives and personal models dropping. The LeBron VIII carries on the slick design from last years VII with Jason Petrie taking control of the process once more. He’s done it again, taking the VIII to more of a style level, incorporating leather and flywire technology to create style and performance. Word is these are very wide on foot and pretty bulky too. Let’s get it straight though, these are basketball shoes designed for the powerhouse that is LeBron James. The build and construction looks to be of a seriously high standard and obviously been created with the style and play of LJ in mind.

Though the switch of teams was pretty bold and a huge change, there’s not so much of a dramatic change in the colour palette for the LeBron VIII. Those used to the previous LeBron catalogue will see the same red, black and white colour choices, the VIII takes on a more darker, meaner approach though with added detailing such as the lion crest that sits on the tongue. LeBron’s change of jersey number (from 23 to 6) has resulted in the absence of the LB23 logo we are familiar with and the 360 Air unit is also back, providing comfort and cushion for those hop-steps and flushes.

The VIII marks in new chapter in the LeBron James franchise, his shoes are developing a certain appeal that could be appreciated in the future as well as today. He’s still a king without a crown but history could make the VIII even more special if this is to be the shoe that LeBron wins his first championship with.

These are available in-store from House Of Hoops London now. 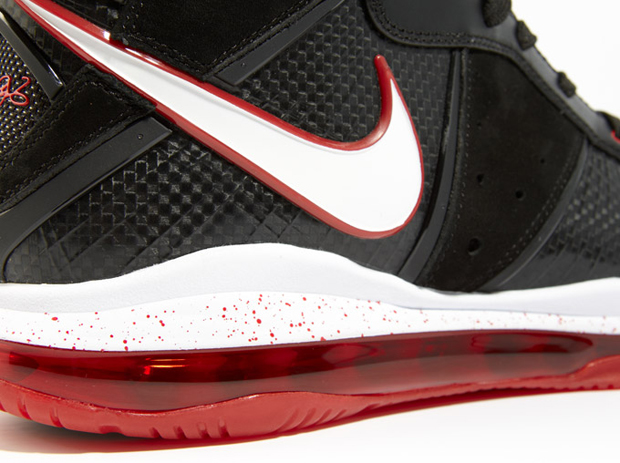