Warning: "continue" targeting switch is equivalent to "break". Did you mean to use "continue 2"? in /nfs/c08/h04/mnt/122689/domains/thedailystreet.co.uk/html/wp-content/plugins/wp-author-box-pro/includes/ReduxFramework/ReduxCore/extensions/customizer/extension_customizer.php on line 442
 A word with Dave White Yesterday we sat down with legendary UK artist Dave White to talk art, sneakers, Nike and the Air Stab.

Over the past 3 days Dave has been creating a unique piece of art to celebrate the release of the final Nike x size? 10 year anniversary shoe, the Neon Air Stab. Being debuted to the world tonight at the well named ‘Air Gallery‘, we were fortunate enough to get down in advance and have a preview of the piece and a brief chat with the man himself. For obvious reasons we cannot show you the entirety of the final piece, but we were allowed to show little bits as an exclusive prior to tonight’s unveiling.

I’ve got to say, Dave is a really nice guy and has a fascinating insight into the sneaker world. You will most likely recognise his infamous side-profile art of Nike’s that have featured on the cover of Art & Sole in the past. You will probably also know of the infamous 2005 Neon Pack that Nike & size? released that Dave had a large part in. Have a read of the interview below and see what he has to say on all of the matters … if you’re a Jordan fan, you will have particular interest in the last question!

Head down to size? on Carnaby Street this Friday where Dave will be signing shoe boxes on the release of the infamous Neon Air Stab from 10am. When did you first start bringing sneakers into your art?

I first started doing sneakers in 2002, I was a scratch DJ with Surreal Madrid and we’d been on tour for a few years so I’d had a couple years away from painting. I’ve always been a sneaker collector, always loved sneakers, and then I was sitting in the studio one day and was looking at the Air Max 95 and just thought “That is one stunning piece of design”. Before I knew it I’d made a painting of it! Some of the greatest things I think have ever been designed are sneakers, so it was almost like taking something that’s a mass produced, everyday object and just giving it a little bit more prestige and sort of immortalising it really.

I can’t help but notice they are all Nike’s. What’s the reasoning behind that?

Nike’s always been my brand, even when I was a kid. As I say, I’ve always collected; when I was a little boy, saving up my pocket money. With the Casuals scene in Liverpool, everybody was Adidas in Liverpool and when I saw Nike there was just something about the colours, the textures and the actual shape of them that was my shoe. I’ve never ever looked backed really to be honest with you. So Nike, but you know, obviously Jordan as well.

So you’ve been collecting for a while now. How large is your collection?

I have a few pairs. 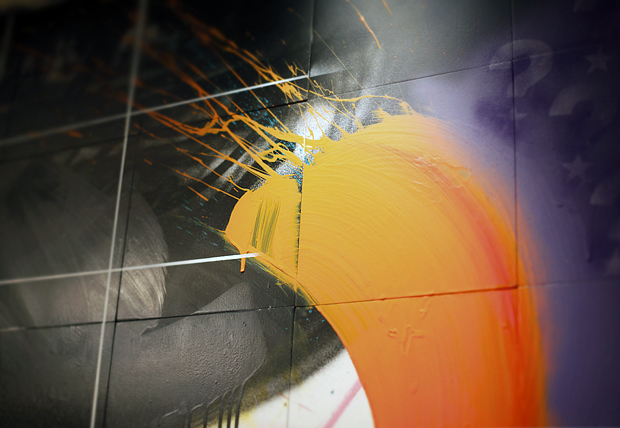 Your work includes a lot of collectable kicks, do you have an all time favorite?

My all time favorite shoe is a Jordan V, which I love so much I have on my arm (revealing a tattoo on his upper left arm). So yeah, Jordan V, it’s got a lot of history for me. When I was studying painting I couldn’t afford £110 for a pair of shoes and when I actually first saw them and saw the 3M glowing, I’d never seen 3M before, it was just like “What is this?!”. I still to this day think that that is the greatest shoe ever designed.

How does the Air Stab fit in to that? Can you tell us a little about its history and what it means to you?

Obviously with the Air Stab, Air Stability, there’s been a few mixups with it over the past few years. I think it’s sort of that heritage of Nike’s runners, which for a lot of people are the greatest shoes ever made, especially from like ’88 and round about the Air Max 1 / Air Max 90 period. There’s just something about the dynamism of the form of the Stab; a lot of people think it’s quite complex, I actually think it’s a magnificent shoe. In 2005 I was involved with the Neon Pack with size? and we did a big event and everything and all that. The actual Stab was pulled on the basis that it was the first time that it had been retro’d and Foot Patrol had the exclusive on it, so it was cut, and then it became a little bit of a myth really. I had a pair of samples and a few pictures got leaked on the internet and people would be mailing me and mailing Nike and saying “Look, it’s gotta come out! Can you let it out?” And then, thankfully, 5 years down the line, here we are at the 10 year anniversary and it’s the final shoe.

So have you been secretly awaiting it’s release since 2005?

It’s one of those things, like all of the projects you’re involved in with Nike, you know? Things, until they’re actually concrete, they become rumor. But as far as I knew, with a lot of the people I was involved with and friends of mine at Nike, it was always gonna come out, it was just a matter of when the day would be. In the sneaker world, you’re best know for your side profile paintings of shoes but you stopped them in 2007. How come?

Yeah in 2007, the last show I did was a show called “The Call To Battlefield” which was to celebrate the Air Force 1 and it was all military based Nike’s, so it was like an aircraft carrier with Air Force 1’s on it instead. So yeah, I’m one of those artists that gets a subject matter and then I’m deeply involved with it and I only ever paint things I’m deeply involved with or I love, but it was just that I’d done and said what needed to be said, so that was the logical conclusion to bring them to a close.

Can you tell us a little about the piece you’re currently making in the conveniently named ‘Air Gallery’?

It’s a delight to be asked once again by Nike to be involved in this project and this sort of ‘panel’ is made of 100 pieces, and what this piece is about is a little bit of something different for me really. It’s sort of the culmination of all of the 10 shoes for the size? celebration that’s been happening for the last 12 months and when you actually look at this painting it’s quite abstract in places, but when you actually see it you’ll see that there’s sections or colours or patterns or materials or textures that are referenced to the 10. That’s what this piece is about.

And how do you prepare for a piece like this? What do you take into consideration?

I mean obviously I received the shoes, so the actual composition had a lot of research that went into it, a lot of photoshop work and just sort of layering things and seeing how the composition would work. Then obviously there’s quite an organic development, there’s a couple of changes that have happened over the past 3 days and a couple of selective decisions that have been made to make the piece work in general, so just an organic work in progress really.

Lastly, any exciting plans for the future?

I have a few exciting plans (face lights up) … Next year is my anniversary, as in the first ever exhibition I had, so it’s 20 years. People think I just appeared with the sneakers work – that’s not the case. I have my own Jordan shoe, which is coming out May 1st 2011 and what they’ve allowed me to do is something that’s never been done before and it’s really interesting, so I’m looking forward to that! I’ve got some other quite nice collaborations that are happening also, but yeah, I’ve got a couple of exhibitions, my brand new subject matter – vintage cowboys and indians, so they’re gonna debut in April in London and then in Switzerland in June. A big thanks to Dave, Shareen, Lewis and all involved.