Warning: "continue" targeting switch is equivalent to "break". Did you mean to use "continue 2"? in /nfs/c08/h04/mnt/122689/domains/thedailystreet.co.uk/html/wp-content/plugins/wp-author-box-pro/includes/ReduxFramework/ReduxCore/extensions/customizer/extension_customizer.php on line 442
 TDS Mix 010: Lung 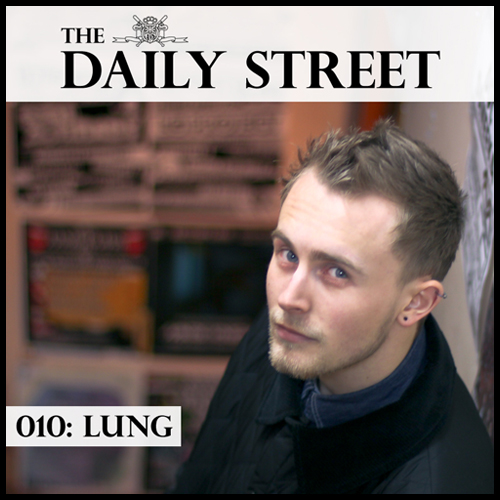 For mixtape 010 we’ve invited hotly tipped newcomer and one of Cardiff’s finest, Lung, to take to the spotlight … and he’s done us proud with this 45 minute Drum & Bass mix.

We’ve always been big fans of Lung’s work here at TDS, ever since he cropped onto the scene back in December ’09 with his debut release ‘Afterlife’ on Kokeshi, and especially when Kryptic Minds killed it on the remix. For me personally, Lung has been a commonly mentioned name since a couple years back when I found his work on Soundcloud and never looked back, so it’s a real pleasure to welcome him to our ever growing mixtape series. For those that still aren’t familiar with Lung’s name, expect to be very soon. Having made quite a noise in the Dubstep scene, getting instant recognition on GetDarker’s “This is Dubstep Vol. 2″ and being played by the likes of Skream, he has now gone back to his roots and decided to enter the Drum & Bass world as well … with his debut being released next month on Hospital Records’ young talent focused label Med School and rumours of studio time being recently shared with the one and only High Contrast. I told you he was hotly tipped, and all this at the age of 20.

For our mixtape, he’s gone for the 170 bpm region and brought a thought provoking and captivating tune selection to the table. Speckled with dubs from close friends and label colleagues, it’s a real pleasure to listen to and makes a very welcome addition to our series. We fired a few questions to the man himself about the mix and his views on fashion …

What approach have you taken for this mix?
“Basically just to try and showcase what music I’m currently feeling right now, the kind of stuff I’ll be producing, and the kind of stuff people can expect to hear when they come and see me play.”

What did you do the mix on?
“I recorded the mix on some entry level pioneer CDJs – nothing fancy, but they do the job!”

Is style important to you?
“I guess so, I’m probably quite lazy (too skint) when it comes down to it, so you’ll probably find me in a hoodie and jeans most days. I do like a nice shirt though. Haha. I’ve always said if I could get away with wearing a suit every day I would. Something tailor made.”

What brand(s) are you particularly feeling at the moment?
“Droneboy Laundry – just seen the new tees for the line and they look sweet as usual!! Will always love Adidas though, had a pair of Superstar II’s which I wore for years – pretty bland I know, but I loved them. Just plain White with the black stripes. Wore them for ages, got too drunk one time and puked on them (fully intended on keeping them – still!) unfortunately my mum threw them out behind my back. GUTTING.”

010: Lung by The Daily Street on Mixcloud