Warning: "continue" targeting switch is equivalent to "break". Did you mean to use "continue 2"? in /nfs/c08/h04/mnt/122689/domains/thedailystreet.co.uk/html/wp-content/plugins/wp-author-box-pro/includes/ReduxFramework/ReduxCore/extensions/customizer/extension_customizer.php on line 442
 Recap: UNDFTD x Puma Clyde Launch Yesterday saw the official UK launch of Puma’s latest collaborative project, handing over the Clyde silhouette to the boys at UNDFTD. We headed to the launch party in London to check them out.

The first thing that strikes me about the collection is how simple they are. If there is one thing that UNDFTD do so very well, it’s simplicity. Clean colours, an eye for quality materials, no bold moves, just simple and effective. With that in mind, it kind of makes sense that the signing was held at the prestigious Dover Street Market basement, another place that holds highly the value of simplicity in design. I also couldn’t help but notice that parties don’t usually happen here, not in the streetwear circles anyway, so big up to both Puma and UNDFTD for that one.

As it approached signing time, Eddie Cruz of UNDFTD fame casually took his place behind a desk and invited people to come forward, the first 3 of whom got a pair of the kicks complimentary for their effort. Now that is a really nice touch. Shout outs to the first guy who was an UNDFTD super-fan … you can see his white New Era being signed below. There was a real air of appreciation in DSM yesterday as people stood and watched the event unfold in mutual admiration, and it was really nice to be a part of it.

If you ever get the chance to meet Eddie Cruz I suggest you do as he’s one of the most level headed and approachable guys, especially considering all the things he’s achieved in his life so far. Not only does he run a dope clothing brand, co-design some of the sickest collabs available, but he’s also a huge cat lover … that kind of guy. I guess it must come with being part of UNDFTD, because I got the same vibes when we met James Bond back in November.

More info on the shoes themselves coming very soon. Congrats to Puma and UNDFTD on the collaboration – a huge success and a great sign of things to come from the partnership in the future. 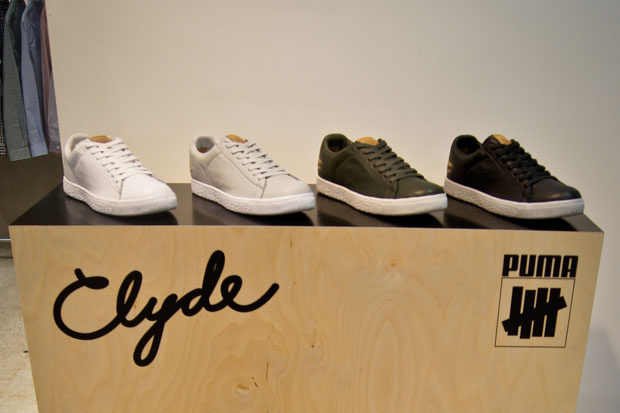