Warning: "continue" targeting switch is equivalent to "break". Did you mean to use "continue 2"? in /nfs/c08/h04/mnt/122689/domains/thedailystreet.co.uk/html/wp-content/plugins/wp-author-box-pro/includes/ReduxFramework/ReduxCore/extensions/customizer/extension_customizer.php on line 442
 TDS Mix 014: DFRNT 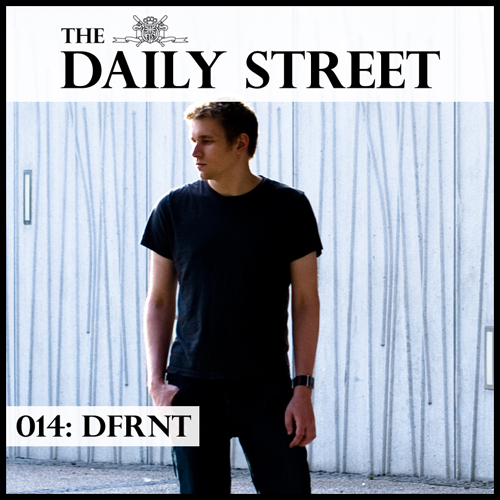 This month we invite Scottish pioneer of some of the deepest Dubstep sounds, DFRNT, to take us on a journey into the deeper realms of 140bpm for an hour. Introducing mixtape 014: DFRNT…

Founder of Echodub, one of the freshest Dubstep labels over the years, as well as being an established artist and DJ in his own right, Alex Cowles (DFRNT) has well and truly established himself in the world of Dubstep. Maybe not the most familiar name to those who like their Dubstep to reflect the sound of nails being dragged down a blackboard in random rhythms, DFRNT is well known to those that appreciate the deeper realms on the edge of the genre. Not content with putting out some fantastic music and running one of the more forward thinking record labels, in both sound and approach to releases, Alex has recently set up Cut, a netlabel dedicated to bringing the best free music possible.

For his mixtape, Alex has delved into the world of deep, dub-style 140bpm based music, resulting in one of the smoothest and most tranquil Dubstep mixes I’ve heard in a long time. Mixed with masterful precision, this mix effortlessly transfers from song to song, creating a true music journey.

What approach have you taken for this mix?
“The mix basically came from my desire to do a deep, dub-influenced mix. Something with hints towards roots, while combining that with the sounds of dub-techno and generally exploring the area of music I recently described as Echostep. I’ve given it the “Future Dub” title, just so that it’s perhaps a bit easier to understand the sound, but you get the idea…”

Which track or mix is your personal favourite?
“Oh man, I really love all the tracks on here. No exception. I could listen to every single track here for days. The Hatti Vatti tracks have got insane shelf life – “Different Music” has been a staple of my sets since it was released ages ago, and I never get bored of hearing 2562’s Pattie Blingh remix. Synkro’s “Hornz” is pretty much a guaranteed dancefloor favourite when I DJ live too.”

What did you do the mix on?
“A seat in my little studio.”

Is style important to you?
“I guess style counts for a lot in my world, yeah. Not necessarily fashion style, since I’m not always the most style conscious dresser, but from a brand or identity point of view with regard to my music and output yes. Things like Echodub, Cut, Sitting Ovation and Insight all have to have an element of style. I think a better description might be well designed consistency. Perhaps that’s what style is anyway?! Yeah, bottom line is I prefer style to lack of style. That said, musically if the sounds are good enough, then it can be substance over style in some cases. But then you could argue that “style” fell within the musical output in those cases. Blimey, this is getting deep.”

What brand(s) are you particularly feeling at the moment?
“I just saw the latest artist series from Addict actually, with the Disney stuff, and it’s the first time in a while I’ve said to myself “Damn, I need to get some new T-shirts” haha. I recently got some Fenchurch stuff I liked too, but I’m not really buying much these days. In fact, even things like trainers which I used to buy a lot, I’ve been holding back on recently. Since Dunks started coming in terrible gawdy, nonsensey day-glo colourways, I switched to buying Supra high-tops. Even that has been cut down of late though. I’m trying to stop accumulating “stuff”.”

What have you got coming up soon?
“I’ve got a big EP coming on Nu Directions, with remixes from Jus Wan, Jack Dixon and ASC. That’s going to be limited edition CD, and a 12″ plus digital. Then I’ve got a few digital releases set for this year. Toffler records in Italy are putting something out, Gradient Audio are releasing an EP, Subdepth are putting an EP out, I’m hoping to get one out on Echodub, and there’s a couple of others I can’t mention. I’ve got remixes due for Unquote (just out I think), Jack Dixon, Quantec (if it ever surfaces) and I’ve started a new line of production which has seen some good feedback so far. I’ve also got other people’s music forthcoming on Cut and a nice big album project coming from the talented Muteqx on Echodub, followed by some really awesome digital EPs.

I’m also planning something of a tour of the USA again this year after the success of last year’s DJing over there. This year I’m planning on seeing as much as I can, in a shorter period of time.

All that, while trying to keep up with good music via Sitting Ovation posts and also putting out my fortnightly podcast Insight!”

014: DFRNT by The Daily Street on Mixcloud