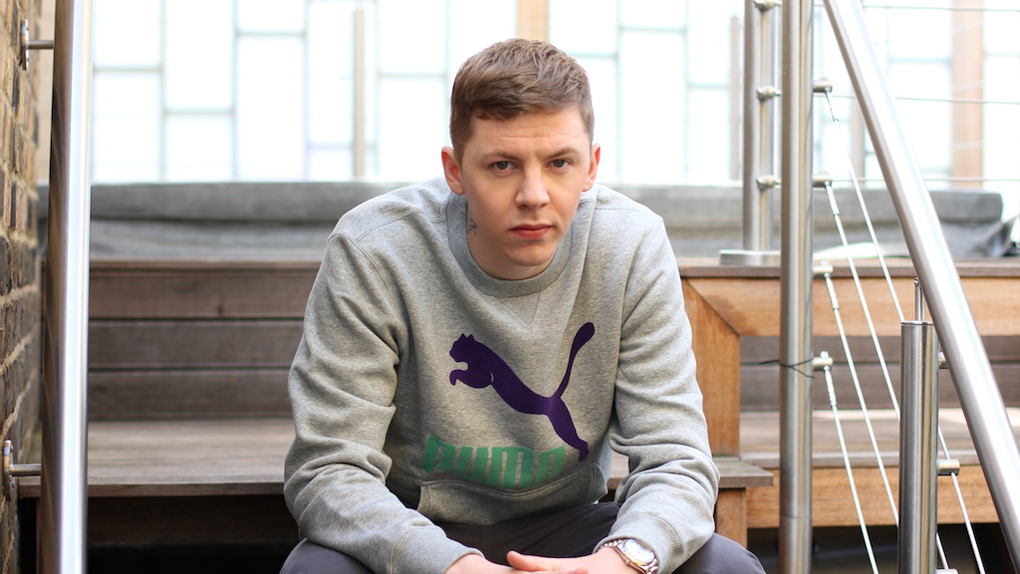 Almost exactly a year since we last sat down with Professor Green, on the verge of the release of his debut album “Alive Til I’m Dead”, things have changed for Stephen Manderson … to say the least. We caught up with him again recently to talk about exactly how his life has changed, key highlights from the last year, album number two and tattoos.

One of the most noticeable things when you meet Stephen is just how nice and down-to-earth he is, so I was very glad to see that his new found fame and fortune hasn’t changed that in the slightest. Still as humble and relaxed as ever (I’ve no idea how, considering his non-stop schedule), he’s managed to steer clear of the traps and pitfalls of becoming a successful musician and still holds that honest persona and welcoming smile that make you forget that this is a guy who’s debut album went in at #2. With his schedule being full since we last spoke with him a year ago, it was nice to sit down, catch up and have a “So … good year?” kind of moment.

For those of you who are more prone to noticing details, you may have spotted that in the last year Pro’s been sporting the big cat rather hard, and by that of course I mean Puma. Tying themselves back to their original roots of Hip-Hop ancestry, it’s great to see Puma getting so fully involved in the scene once again. What you may not have seen however, (unless you’re some form of super-fan) is Pro’s new ink. Now I knew the boy liked his ink, but his collection has grown substantially since we last spoke. More on that later on …

As always, it was a relaxed affair with Pro, and a much welcomed catch up sat on top of the Soho Sanctum Hotel – a slightly nicer backdrop than the grubby cafe that hosted our previous shoot. Kick back, sip some tea and get acquainted once more with possibly the most humble and honest chart-topping musician out there; Professor Green. 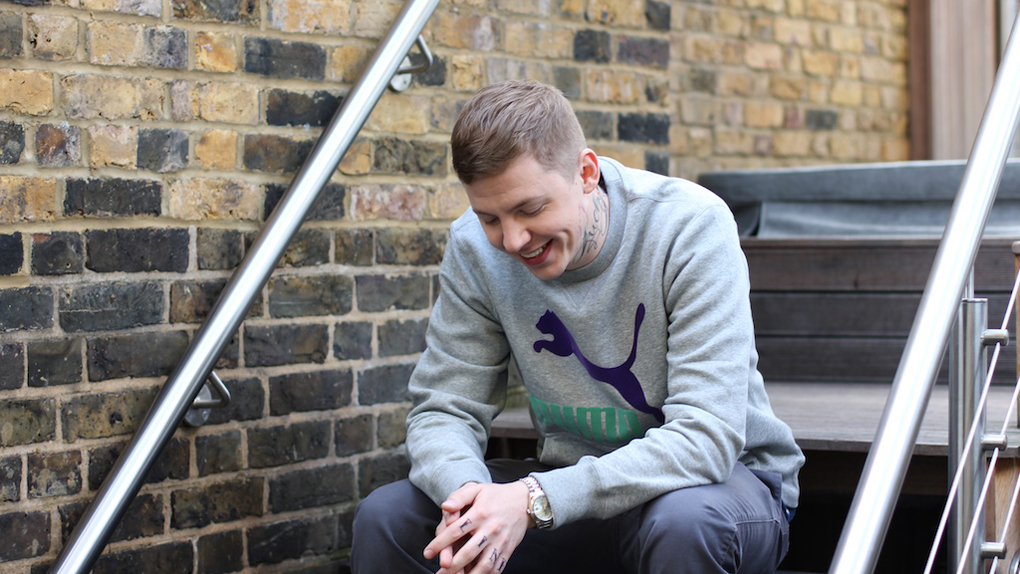 It’s been almost a year since we last sat down for a chat, how would you say your life has changed since?

Umm, a little bit. Yeah, it’s changed a little bit [smiles]. I’m busier, I don’t get as much time to myself. It’s cool though – it worked! It’s nuts. I don’t know if it ever sinks in, but it’s been quite a turbulent change as well. I kind of just got caught up in the whirlwind. It’s not even something you realise. Sometimes, every so often, you have those moments where you go “Shit. This is real.”. It literally did happen so quickly I didn’t realise, you know? And now, what we do is just common place.

Back then the album hadn’t even dropped and the “Just Be Good To Green” video was in it’s final stages of production. Tell us about some landmark events that have passed since then…

The album going in at number two man. That was pretty fucking good for me. Selling out my first headline tour. Doing Koko – that was an emotional one. Lily came out, Lab came out, everyone was there. That was nuts. Then again in December when we done the second tour. Yeah, to do two sell out tours. I’ve done so many support slots, supported so many people along the way, and then to do my first headline tour, that was pretty special man. To get off the splitter and get on to a tour bus, to actually have some level of comfort was quite fun.

Obviously, the next big event is your Somerset House headline show on July 8th. Can you give us an idea of what to expect?

There’s going to be a very very very special encore. I’m gonna perform some songs that I haven’t performed before, like “Goodnight” I’m gonna perform, which I haven’t performed. I could perform it and could have performed it, but I wanted to make sure then when I did, I do it right, so we’ve made some interesting additions to the band for that one track. So fingers crossed, if it all comes off, it’s gonna be pretty special.

How about album number two? Can you tell us anything about that?

Nearly done! Yeah, I can actually say that now quite safely. Yeah, really nearly done. I’ve only had like a day and a half in the studio in the past five weeks, and banged out five songs. It’s coming along really really well and it’s really starting to feel like an album now, which is good ‘cos it’s the second album and this is the one more than any that I’m gonna be judged on, so it’s gotta be right. It’s a lot more sure, I would say. I think the best thing that I did with the first album is lay out a lot of paths – it was all my musical influences. There’s a lot of different influences in this album, but I feel like I’m kind of walking one of those paths that I set out, rather than laying the tracks for any others. It feels good, it feels good, but yeah, I’m very aware of the fact this is the one I’m gonna be judged on.

Is there any theme to the album, as a topic?

The album’s called “At Your Inconvenience”, which was kinda spawned by a lack of sleep to be honest. You know, doing a gig in Bristol, having to be at studio first thing the next morning, writing the song on the way to the studio, then having a gig in Cardiff that night, then coming back to do promo. I actually came up with the idea when I was having a piss, seriously. I was having a piss on the “Coming To Get Me” video shoot, and weirdly there was a mirror above the urinal and there was a card stuck in it and it said “At your convenience”, and again I’d not had much sleep and I just thought “At your convenience? Actually no, not anymore, everyone can go and fuck themselves” [laughs]. The first song on the album is the title track, and it’s the start of it. That’s the message I get across in the very first song. 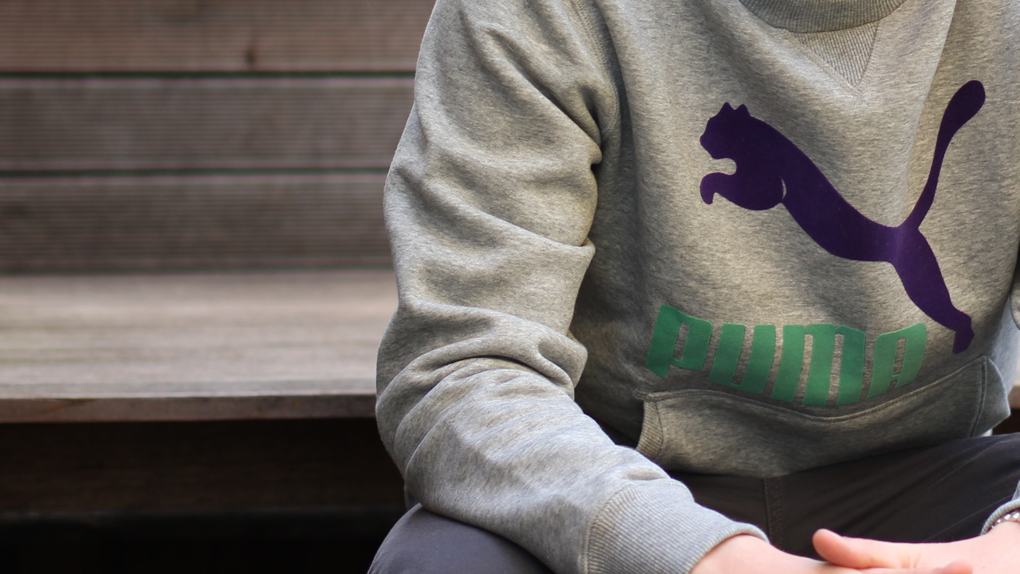 When did your relationship with Puma kick off?

We started at the beginning of this year. I remember when it was first mentioned and I was like “But I’m not sporting. How is it gonna work!?” you know? I like the clothes, I like the product, I like what they stand for, but… and they were like “Well, we don’t want you to be sporting. It’s the whole After Hours Athlete thing, you know? It’s more about getting a girls number than it is running the fastest 100 meters.” and I was like “Cool. I can get girls numbers, I just can’t run 100 metres very fast.” So it all worked pretty well. And we have a similar vibe, you know? It works both ways. It’s kinda weird when you see people with brands that they can’t really fully endorse because they clearly don’t have any kind of relationship with that brand. So, it’s been easy, and there all very nice. They are, they’re wicked. We’re all going Glastonbury together this year … I’m scared.

What kind of things have they got you doing?

As an ambassador of “After Hour Athletes”, what do you like to do most after hours?

Which Puma shoe is your favourite and why?

Umm, ooooo. Clyde or the Suede. Simple, classic and understated – a bit like myself. [laughs]. Not simple! I was just about to correct that … but we’ll roll with it.

At the beginning of your relationship with Puma you were quoted to say that you were looking forward to filling your wardrobe with Puma stuff. Have you managed to pull that off?

Yes! I’ve got loads and loads and loads of tracksuits. There’s loads of red boxes everywhere. The problem I have is that I don’t have any pictures on the outside of the boxes. I haven’t quite got round to taking a Polaroid picture of all of them. I always end up in a frantic rush and I’m like “Shit! I need a blue pair of trainers”, and it’s always the last box, so I come home to just trainers and boxes everywhere. But the single most best thing about this deal is that I don’t have to pay for socks any more, and I always throw my socks away on tour. I’m not into bringing sweaty socks on the tour bus. I hate cheese and I hate sweaty socks. Neither of those things are allowed on the tour bus or in my dressing room. Mate, socks are so fucking important. Big up socks. 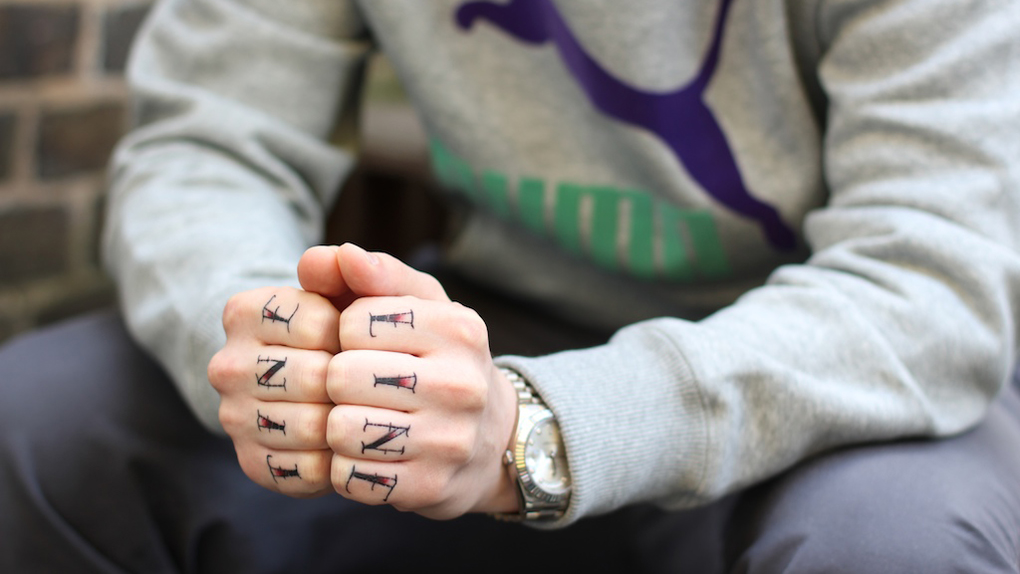 There’s a rather noticeable new piece of ink on the back of your neck since we last spoke. Can you tell us the story behind it and where you had it done?

Yeah! I finally got a chance man. I had that done when I was on the Live & Lost tour [points to the tattoo on his left forearm], ‘cos I had the tattoo booked and then the Live & Lost thing came up and I was like “Well, I’m not missing my tattoo!” [laughs]. I keep doing it, I keep having to cancel and it gets on my tits because my artist is in and out of the country – he’s never here, so it’s always hard to get in. So yeah, I got my “FINE LINE” piece on my knuckles – I’ve finally got my knuckles done, which I’ve been wanting to get for ages. And I have a rose on the back of my neck, which was for somebody I lost, but it kinda puts the three tattoos I have on the side and the back of my neck together, which is cool. Quite painful; knuckles weren’t bad. Everyone told me fingers were horrible – I mean, we have it on film, I was just kinda like … They all hurt, but some are worse than others. The back of my neck however, was not fun. There was no moderate pain, it was just bad to worse. The spine actually wasn’t that bad, it was just the muscle and the tendons; it was a bit … uncomfortable. I get them done by Demian Cervera; he works out of home now.

We know that your fans mean a lot to you. How did it feel when you passed 1million fans on Facebook?

Nuts! I had 4,000 when it first kicked off. I had 4,000, and then less than a year later it’s a million! It would be nice if like … half of them bought my next album? [Smiles]. But it’s wicked man. Between that and Twitter you do get a lot of shit, and it’s not that people actually rile me, it’s that I really enjoy it, I see it as a sport. I’ve always been argumentative, and I’ve turned shutting someone down in 140 characters into an art. I do enjoy it, but for the most part there’s a lot of love and I don’t get as much time to reply to people as I’d like to, and you can’t reply to everyone, but you know, without fans I ain’t shit, so they are the single most important thing in all of this.

Special thanks go to folks at Puma, Soho Sanctum Hotel, the two make up girls and of course Stephen himself. A pleasure as always, and we hope you enjoyed the read.

Professor Green: ‘Til I Die