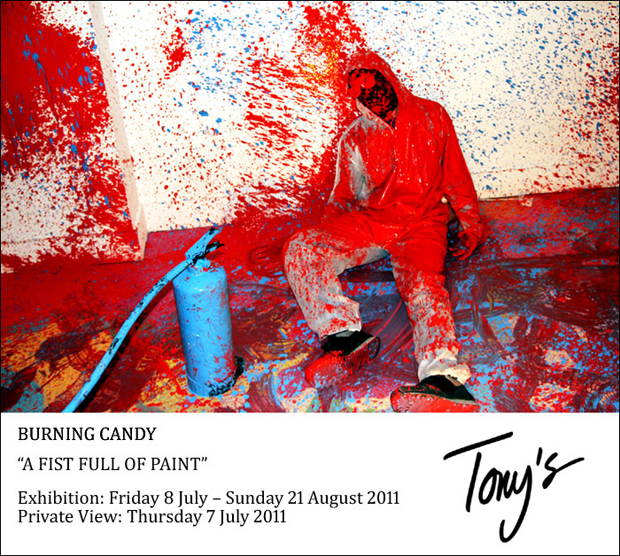 Tonight, an interesting new exhibition from infamous East London crew Burning Candy opens at Tony’s Gallery (Sclater Street, E1). The show itself, part exhibition, part performance, continues the story of the moment (mainly due to artists like Kidult and Katsu), that is, the use of a fire extinguisher as a high powered spray can.

‘A Fist Full of Paint’ (which takes it’s name from the 1964 western ‘A Fistful of Dollars’ starring Clint Eastwood) will present the aftermath of a western style showdown between two artists, each armed with a paint-filled fire extinguisher, the evidence displayed on the walls of the gallery, and will be accompanied by a documentary film on the different attributes of modern graffiti culture.

In addition, the show will also feature paintings, prints and illustrations by the BC crew, and a screening of their un-released DOTS film. The film (so far) will be available as part of a limited edition box set, along with 9 prints and a Mighty Mo T-shirt – only 20 sets have been produced. I’m a huge fan of Burning Candy’s work, and they represent a lot of what I love about street art and graffiti in the UK, and it’s impact on the atmosphere of areas like Shoreditch and Stokes Croft in Bristol. Opening tonight (July 7th), the show will run until the 21st of August, so there’s plenty time to check it out. Find out more at Tony’s.

Recap: Any Forty Versus Exhibition