Today has been one of the hottest, and will no doubt go down as one of the most memorable in sneaker history. After plenty of rumours, teasers and previews, this evening, Nike finally unveiled their finest creation, the 2011 Nike MAG.

I don’t need to go into too much detail about the significance of this shoe, first appearing in Robert Zemeckis’ 1989 film Back To The Future Part II, on the feet of one Marty McFly, otherwise known as Michael J. Fox. Since then, the power-laced, LED infused Nike MAG has become the stuff of legend, and a dream for those who grew up loving the BTTF trilogy, and Nike heads alike. Well, today, that dream finally became reality, or at least it will do for 1500 people.

The Nike MAG was revealed to a crowd of industry heads on the Universal Studios back lot, in the surroundings of the film’s infamous clocktower. There, Nike designer Tinker Hatfield and CEO Mark Parker told the audience that 1500 pairs had been produced, and they would be sold through individual eBay auctions, with all proceeds going to the Michael J. Fox Foundation for Parkinson’s Research.

The shoes themselves are a great re-production of the treasured movie version, with slight changes to the foam ankle support for a more comfortable fit. The LEDs on the heel can be illuminated by a pinch of the ‘ear’ and hold a charge for up to 5 hours – after that, it’s back to the dock. The big question is, “are they self-lacing”, and unfortunately, the answer is not quite yet – we may just have to wait ’til 2015 for that.

Keep your eyes on eBay for the chance to get yourself a pair – the proposed URL is http://nikemag.ebay.com – but expect to shell out, as these are without a doubt some of the most sought-after kicks in history. Props to the Nike hype machine for making this one hell of a ride, and certainly a day to remember. Get a closer look in the video above. 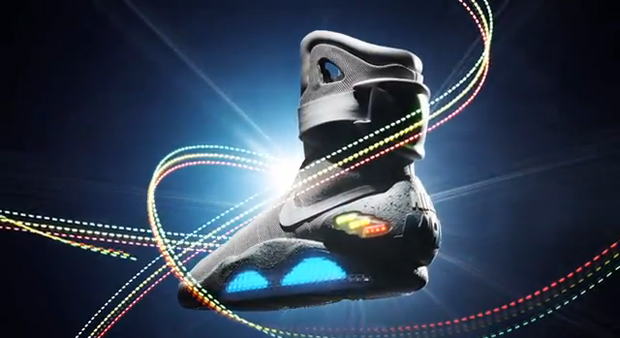