Warning: "continue" targeting switch is equivalent to "break". Did you mean to use "continue 2"? in /nfs/c08/h04/mnt/122689/domains/thedailystreet.co.uk/html/wp-content/plugins/wp-author-box-pro/includes/ReduxFramework/ReduxCore/extensions/customizer/extension_customizer.php on line 442
 Interview: Mac Miller 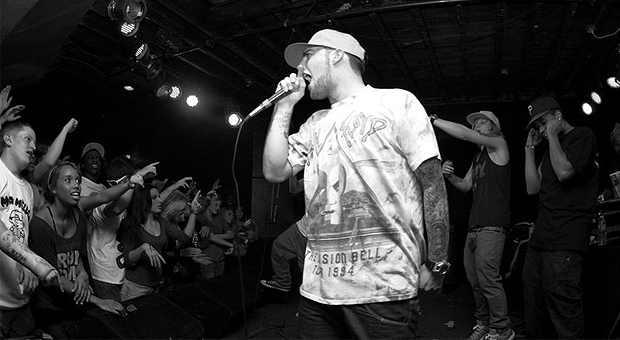 Mac Miller has become a force to be reckoned with in the world of hip hop, with over 160 million YouTube views and a spot on the prestigious XXL Freshmen List earlier this year, he’s set to make both a stir, and a pretty penny from upcoming album Blue Slide Park. Having declined various major label deals, he looks to make his scene in Europe with a tour for his K.I.D.S mixtape which was released this year. I went along to his hotel, prior to his Shepherds Bush gig, to pick his brains.

I turned up at his room with a lot of optimism, being a huge fan myself from as early as The High Life. As I entered, a cloud of smoke bellowed out of the door – much to the bemusement of the hotel manager – and I took a seat while Radio 1Xtra DJ Semtex finished up his interview. Mac was rocking some crazy clothes, matching Hermes accessories with a Trapstar snapback, camo shorts and the Concord Jordan XIs.

Before the interview, as Mac ripped off a slice of pizza and lit a cigarette, I asked him what he thought of the UK scene both in terms of fashion and music, to which he told me, in a fairly frank manner, that he didn’t know much about either. “Adele likes my shit” he said, as I gazed over at a copy of the new Wretch 32 album still in its cellophane, splattered with what looked like the grease of a double pepperoni.

If you disregard his lack of knowledge of the UK scene, he’s been music focused since dropping out of high school at 15, having described his passion to be “as big as the Beatles”, as well as hinting a few times that he may stray away from rapping at some stage in the future in order to heighten his popularity. After a few pleasantries, and slices, were exchanged we got straight into it.

You landed a few hours back, so my first question has to be, what are your thoughts about the UK so far?

“I tried not to look at the road while we was driving… Just because I didn’t wanna freak myself out like, the roads are completely different. So, I was just like, facing the other way in the van. I’ve always thought about England, you guys are known for your fashion of course, but to tell you the truth I haven’t seen much, yet. I mean… I’ve looked around and there’s a lot of different things, but since I’ve got to London all we’ve been doing is driving to the venue and to the hotel so… I’m hoping to explore a bit after the show.”

Have you experienced any stigma being a white rapper? Asher Roth, most famously, was scrutinised by American blogs even though their style is nothing akin.

“I mean, I don’t take it as criticism [being likened to Eminem]. I’m white, there’s not a lot of white rappers, so they say I’m like Eminem. If you know anything then you’ll know I’m nothing like Eminem, my story’s different and my music is way different. Everyone’s always going to be saying things or whatever, so if I’m not gonna pay attention to people saying I suck then I’m not gonna pay attention to the people who say I sound like Em, it’s the same shit.”

People like Theophilus London and Lil B have sold out UK gigs with a much smaller following than yourself. Why did you take so long before deciding to come over to Europe, and the UK in particular?

I kinda just, um, didn’t know how popular I was over here. It’s always been my dream to perform out here, but, hey man. If it could’ve happened earlier then I definitely would’ve been over here way earlier, but I think that this is really when people thought it was possible for me to have a good reception. I didn’t wanna just come over here and do a small show, I wanted to come over here and do some seriously awesome shit you know? So the fact I can sell out a 2000 person venue is just crazy. I know any earlier than now and I wouldn’t be at that point.”

Theophilus London’s been touring Australia with Big Boi recently. I know Outkast are a huge inspiration for you, having met Big Boi at the Governors Ball earlier this year too. What did you think when you met Big Boi and, have you ever met Three Stacks (Andre 3000)?

“No dude, I’ve never met Three Stacks yet. Uh, I heard though that he fucks with my shit, which is cool, haha. But yeah I met Big Boi and it was surreal to see him rock all those jams, cause like they let me come and stand on the stage and watch. But he’s a cool ass dude man, that’s the one thing that I’ve learned like, as a fan you’re like super like “oh shit I’m about to meet so and so” but when you meet people it’s like man, people are just regular people. It’s just that they’re good at making music. It’s cool to be able to have a regular conversation with people that I grew up being huge fans of.”

“Without a doubt Aquemini, both sentimentally and because I love every sample and flow.”

You’re pretty influential in terms of street style, in America particularly. What are your favorite brands right now?

“I’m not a huge fashionable dude; I think I randomly started some trends with my fans but not on purpose. I just kinda wear whatever, my homies will come and say you need to check this brand out, it’s dope. I respect people’s opinions so if you have any you think I should check out I’ll be on them no doubt!”

Wale has his album Ambition coming out soon, just as you have Blue Slide Park in the near future. He’s just hit a million followers and dropped a mixtape to thank his fans. You’ve been dropping songs every hundred thousand followers in a similar fashion, with “People Under The Stairs” (300k) being my favourite… Have you considered following suit and releasing a collection of songs when you hit a mill?

“I’ll probably like, put all of the songs that I’ve released since I started doing the mile stone drops together and release them in a pack. But I won’t be doing anything crazy, but just so people know all of the songs that went onto it. Right now the focus is the album, I don’t wanna do anything to take anything away from that, so until the album comes out I just want to do anything I can to make that better, and bigger.”

The video for Frick Park Market is completely crazy.  I thought to myself, “this is insane!”, going from a regular video into something so strange. What was the inspiration behind that?

“The song kinda breaks down into something in the second verse, it gets way trippier. The inspiration was just like, how the album is. You come in, and you’re awesome, just having fun, just rhyming. Then as it goes on, it takes you on a journey, I like that about things. I like the fact that it starts out here, and then ends there but in the same song, I can’t believe we did that. I wanted the viewer to have the same effect with the first single as I hope the whole album has.”

You were in the XXL freshmen list for 2011, and there were some big acts on there, and a few that haven’t really done anything since. I was wondering who your act to watch this year is, that maybe didn’t feature on the list?

“Uhm. I’d probably say Tyler (the Creator) … y’know what I’m sayin?  He obviously won a VMA and could’ve been on there in a heartbeat. There’s a lot of people that could’ve. I think people worry too much about who’s on there and who’s not when it’s really just clap it up for who they felt deserved to be on there. Anyone who doesn’t, it doesn’t hurt their career, like Tyler’s doing fine and he didn’t feature.

There’s other people that I’m a huge fan of, that weren’t on the cover. I dunno if you guys are up on him yet, there’s this dude out of Harlem called Asap Rocky. Someone you guys should check out, he’s my homie, the illest, trill as hell.”

You’re a big fan of Washington based female rapper Rapsody, do you rate her as one of the best MCs? Can she put up a fight with the likes of Minaj and co?

“She’s like, the return of the B girl man. She’s just ill. She blew me away when I first heard her rhyme, I went to the studio at 9 and there was this girl who was just chilling, kickin’ it in the studio. This song comes on and it’s this chick rhyming wild and I was like “Damn, who’s this yo?” And she was all shy and said “me” in this innocent voice and I was just like wow. Such a beyond humble person, and then she just tears up the beat. She can definitely hold her own with anybody, male or female.”

The show itself was interesting, with a solitary support act in the form of London based oddity Mikill Payne. Mac played pretty much the entirety of his K.I.D.S. mixtape, with a few tracks from his Best Day Ever EP, and a few hip hop classics… Though I can’t help but feel he was on stage for too short a time to warrant the evening. I for one can’t wait for Blue Slide Park to drop later this year, and would like to thank both Mac and Arthur Pitt for making the interview possible.