Warning: "continue" targeting switch is equivalent to "break". Did you mean to use "continue 2"? in /nfs/c08/h04/mnt/122689/domains/thedailystreet.co.uk/html/wp-content/plugins/wp-author-box-pro/includes/ReduxFramework/ReduxCore/extensions/customizer/extension_customizer.php on line 442
 TDS Mix 017: Jamie Grind 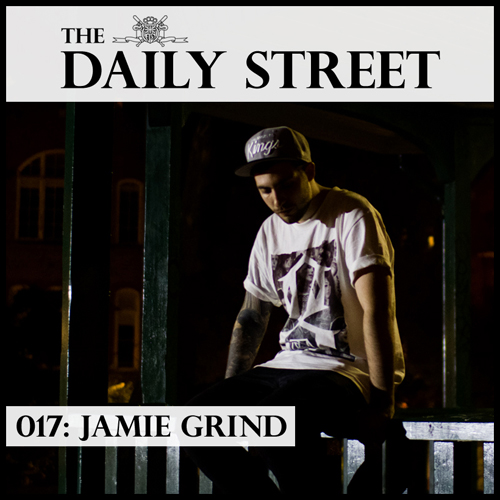 Mixtape 017 is brought to us by Jamie Grind, who has forged his own sound in the UK Bass Music scene with his Hip-Hop influenced take on UK Garage.

Originally from Leeds and recently relocated to London, Jamie has a unique ear when it comes to creating dance music, and this mix represents it so well. Moving across a broad spectrum of genres, all of which are huge influences on Jamie’s own sound, he pulls for the likes of Ramadanman, xxxy, Spectr and Julio Bashmore before moving on to include some classic Grime followed by Drake, finishing on Juke. It’s an epic adventure of a mix to say the least, and packed with energy.

After bursting onto the scene in 2010 with his split 12″ release on Infrasonics, Jamie Grind has become an increasingly recognised name and has popped up time and time again on track lists. A further release on Fortified Audio and and a stack of remixes have helped secure him as a name to keep an eye on. Keep your eyes locked for the release of his forthcoming EP on Wicked Bass, which sees two previous The Daily Street mixtape artists step up to the remix responsibilities; Hackman and Throwing Snow.

Check out the brief interview with Jamie below and enjoy the mix … it’s a real party starter of a mix!

What approach have you taken for this mix?
I’ve approached the mix in the same way as a production so there’s a lot of switching between moods, it’s not just a collection of the latest tunes on Boomkat. I took a good while creating a track listing that was current but also gives a nod to my musical influences so expect to hear some house, UKG, grime, American hip hop, RnB and there’s a couple of my own productions thrown in there too. I’ve tried to keep the pace rolling, there’s quite a few short mixes and blends over 3 tracks which hopefully keeps it sounding interesting. Its a bit different to what you’ll hear me play in the club – mainly because the majority of people will be listening to this on their iPod, and not a Funktion One.

Which track or mix is your personal favourite?
Probably the Drake track mixed with the Untold remix of Ramadanman. It has the famous Rhythm and Gash vocal sample at the start and its played at 150bpm so sounds pretty crazy with that Juked-up sounding percussion. In terms of a favourite tune, the one I’ve probably played the most is Frisco – Training Day, I’ve still got a lot of love for grime.

What did you do the mix on?
Ableton. Yep, its not a ‘live mix’, but I did the majority of it in bed, its warm in there. I’m sure some geeks will find fault in the fact I didn’t take it to the decks, but I think the end product this way is a lot more considered.

Is style important to you?
Yeah.

What brand(s) are you particularly feeling at the moment?
For tees, at the moment its all about Diamond Supply, Rebel 8 and TITS. As winter is approaching I’ll be looking towards Brixton for the headwear and Wemeto for outer wear. This year might be the year I get some Tims, never really been my thing but this season’s Chukkas actually look dope. Saying that, I’ll probably still be wearing Vans in the snow.

What have you got coming up soon?
I’ve got the Rum n Raisin EP coming out very soon on Wicked Bass with remixes from Hackman and Throwing Snow, a split 12″ with King Thing on Infrasonics, and I’m currently working on another 4 track EP of new material.

017: Jamie Grind by The Daily Street on Mixcloud