Warning: "continue" targeting switch is equivalent to "break". Did you mean to use "continue 2"? in /nfs/c08/h04/mnt/122689/domains/thedailystreet.co.uk/html/wp-content/plugins/wp-author-box-pro/includes/ReduxFramework/ReduxCore/extensions/customizer/extension_customizer.php on line 442
 Interview: Adam Hinton for Nike #makeitcount On Tuesday we went along to a private viewing of the new Nike #makeitcount ad campaign, which features a plethora of UK sporting talent (Mo Farah, Mark Cavendish, Luol Deng, Paula Radcliffe, Rio Ferdinand, Perri Shakes Drayton Jack Wilshire and Harry Main). After photographer Adam Hinton walked off stage, we sat down with him to have a talk about both his involvement in the campaign and his career thus far …

What was your inspiration behind the distinct style of the photographs?

“My inspiration, well I don’t know. It was funny because I’ve taken shots like this before, I did some shots in Cuba, it must have been about 10 years ago, of boxers, and Guy (the Creative Director) showed me some ideas he had from shots of cyclists and then I showed him some stuff I had done in the past against a sort of clean background like this and took it from there really. But the idea, that the boxers at the end of a bout would look absolutely knackered, it’s a fairly classic thing to do.”

Was there anything in particular that you tried to capture in each athlete?

“Well really we tried to get them to look exhausted. Well, to show them at the point of utter exhaustion; deep breath, lots of sweat. There is a certain thing where you can’t make it up, you know? We found that out when we were shooting. These guys had to be exhausted, you can’t fake it. You get them exhausted and then you get them in, then you get the shot within about two minutes and literally after that they’ve recovered, and I say “Look, can you try to get back in that space? Imagine you’re in that place.” but it just doesn’t work. You soon realise it – two minutes, and then it’s gone. You’ll have to go back and do a few more push-ups, a few more runs around the track, yeah?”

What was the most challenging shot to take? I’m guessing it was the Mark Cavendish shots?

“Well actually it’s funny, I think the most challenging shots were the footballers. Rio was quite difficult – he’s quite used to doing stuff like this and he said he was suffering an injury, so trying to get them to be intense was a bit more difficult because they weren’t able to go for a run, they weren’t able to really push it because of their injuries. Jack did some push-ups but these guys are so fit that you really have to push them to their limits before they start looking exhausted, and then you only get two minutes of them being exhausted, so with Jack and Rio we had to talk them into the space.”

So conditioning was the enemy?

“Yes, conditioning and injuries were the enemy for sure, but they did the best that they could, which was great.”

You’ve shot the world over, where has been your favourite location to shoot to date?

“I’ve spent quite a bit of time in the favelas in Rio and I suppose that is my favourite place. Sounds a bit of a cliché, but yeah it’s great; the energy, the buzz, everything about it.”

You say on your website that you feel sport brings even the poorest communities together, is this something that you tried to evoke from this shoot at all?

“Well the thing that interests me about sport, and what I like about sport, is that it unites people; it’s a common language. Most sports are quite straight forward, quite simple; everyone can do it. You give them a ball, you can kick a football around, you can go running, you can do some hurdling, you can make up hurdles, you can do all these things. You can start, you just need a hoop and a ball and you’ve got basketball. It’s the one thing that’s universal. It’s a universal language and it’s quite unifying, that’s what’s nice about it and that’s what I’m trying to show. I mean, it’s a leveller as well, which is why when you deal with these people, when they’re pushing themselves, you know there’s a levelling – a commitment in their work.”

You also say on your website that you were involved in a knife attack when you were younger, has this had any effect on the sorts of thing you tend to shoot now?

“No, honestly no, not really. It’s had no effect on anything. Luckily, I got two thousand quids worth of compensation when I was 18, and I was stabbed when I was 15, but luckily I didn’t get it when I was 15. They held it back so I spent it properly.”

You started out shooting in black and white, shooting documentary style photographs, which you still do, and then you moved to colour. Is there any reason you went back to black and white for this campaign?

“Well, all the shots now we shoot digitally. All the shots are in colour, but we stripped it down. There’s a sort of rawness in the black and white, so that’s what we wanted to do. It kind of strips things down to basics, so it works really effectively for this campaign. So that’s why we did it.”

So what are your plans for the not so distant future?

“I don’t know. My plans for the future? Just keep on working. I’m lucky I work in advertising, I love working in advertising, and through that I can fund my own personal work, which I do independently, so I just concentrate on that. I’m working on a couple of projects; one about people living in urban slums and how they develop and how people live in them, and I’ve also just started one in Mongolia, because that country is going through a sort of economic explosion in terms of how it will develop and change rapidly, so I’m interested in those developmental issues. So I’ll just keep working on that.”

And lastly, working eight weeks with people writing their own pledges, what’s your pledge for 2012?

Special thanks to Adam Hinton for his time and to the folks at Nike. You can check out the shots from the campaign below and our recap from the private viewing here. 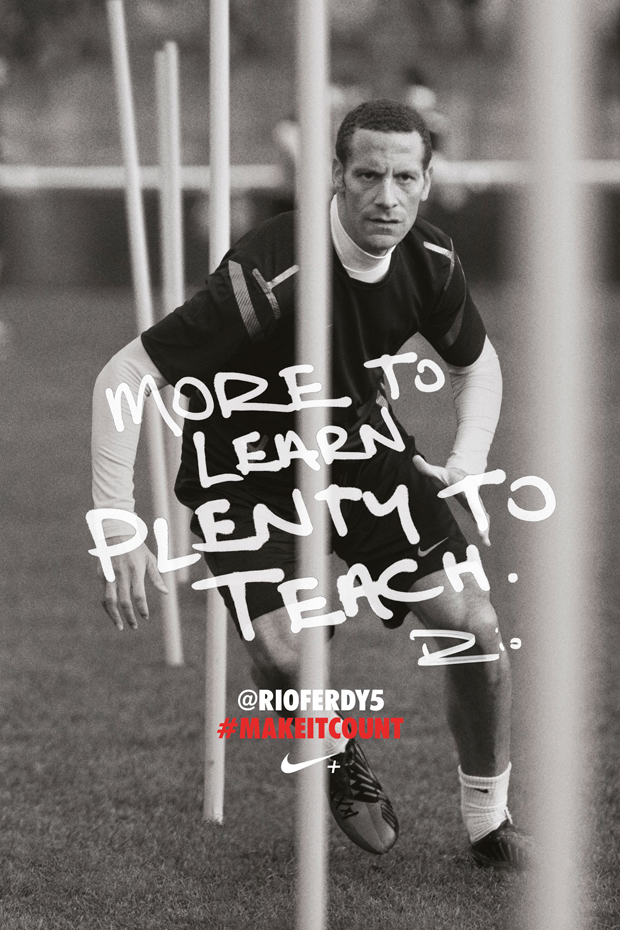