Warning: "continue" targeting switch is equivalent to "break". Did you mean to use "continue 2"? in /nfs/c08/h04/mnt/122689/domains/thedailystreet.co.uk/html/wp-content/plugins/wp-author-box-pro/includes/ReduxFramework/ReduxCore/extensions/customizer/extension_customizer.php on line 442
 Download: Mikill Pane - 'You Guest It' EP 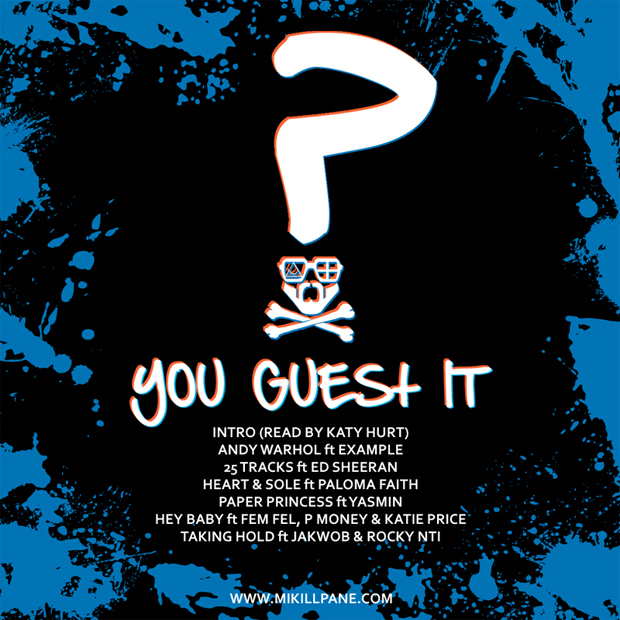 Mikill Pane released his ‘You Guest It’ EP over a week ago now, and after quite a few listens I’ve come to the conclusion that it’s one of the best EPs of it’s kind to come out of the UK in the last few years.

The whole ethos behind this EP is about working with other artists, with each track featuring a prominent UK artist that goes to show the reverence that Pane has built for himself in recent years, since he really started making a splash. Pane’s lyrics are hilariously witty at times, incredibly topical, and strongly attuned to the current climate, and his rapping style is such that it’ll often take you a few listens to fully understand the double entendres and puns that seem to litter the tracks. I’ve been a fan of his music for quite some time, but this collection of tracks shows his diversity as an artist which I think has perhaps been a quality he’s lacked in the past.

‘Heart & Sole’ features Paloma Faith, who contributes a rather crass chorus to the track, and tackles the issue of material infatuation – a particularly relevant topic for a writer like myself. There’s also a recurring theme running throughout the EP, which Pane touches on in this track – the idea that he’d much rather put out music he appreciates than what the masses are looking for; something a certain band that came to prominence last year should take note of and stop ‘doing the hump’.

The best track on the EP, in my humble opinion, is ‘Hey Baby’ featuring P Money, Fem Fel and Katy Price. Yeah, Katy Price. I begged that she wasn’t singing after seeing her name on the iTunes bar, and much to my delight, she only contributes two words to the track, following the relatively misogynistic tone that runs rife throughout the song. Perhaps aptly, the song is about the dumbing down of relationships, as all three artists share with us bars that promote their carnal, nonplussed attitude towards sex.

I’ve been playing this EP nonstop this past week, getting a feel for it, and with a feature list that includes Example, Ed Sheeran, Yasmin, and Jakwob, along with those already mentioned, it seems the high esteem which I hold Mikill Pane in is reciprocated by many of his fellow artists. The EP is available now as a free download – get it here.