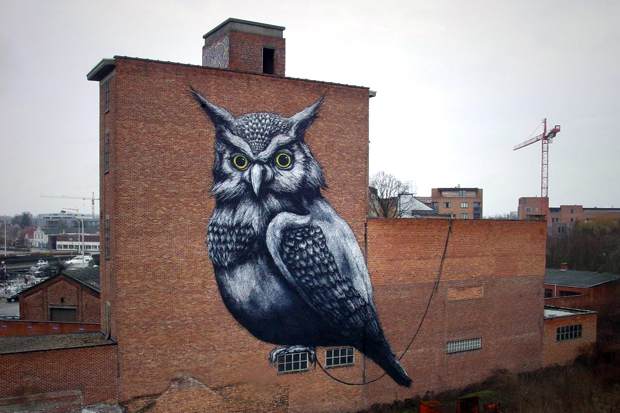 I’m pleased to hear that one of my favourite street artists, Belgiam’s ROA, has a solo show launching in London this week, together with the launch of his book ‘An Introduction to Animal Representation’.

ROA is known for his vast murals of larger-than-life animals, plenty of which can be found in London and other cities across the UK. His distinct black and white style first caught my eye around the Brick Lane and Redchurch Street area, and I’ve been following ROA’s work closely ever since. Hypnagogia is a three-part exhibition, incorporating two galleries (StolenSpace and The Stone Masons), as well outdoor work in the surrounding East London area. Derived from Greek language, the show’s title refers to the transitional state between sleeping and awake, a bridge to other realities, and will see the artist explore the great difference between human and animal behaviour.

Alongside the show, ROA launches his own hand-made book of artwork titled ‘An Introduction to Animal Representation’. 125 of an edition of 500 will be available tonight at the exhibition’s opening at StolenSpace. The show opens this evening (April 19th) from 6pm, and will run until May 6th. Really looking forward to checking this one out.