Warning: "continue" targeting switch is equivalent to "break". Did you mean to use "continue 2"? in /nfs/c08/h04/mnt/122689/domains/thedailystreet.co.uk/html/wp-content/plugins/wp-author-box-pro/includes/ReduxFramework/ReduxCore/extensions/customizer/extension_customizer.php on line 442
 Adidas Consortium ‘Your Story’ Drop Two Collection 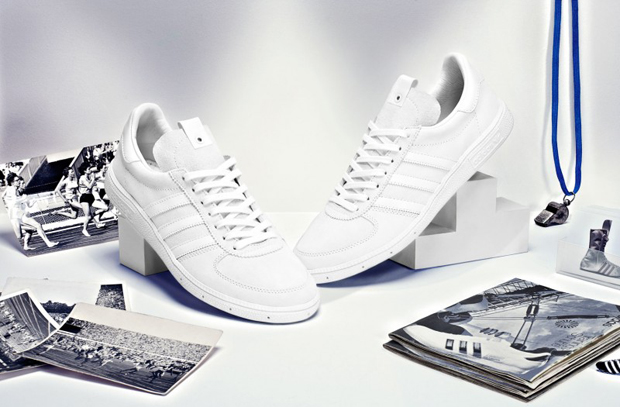 Last years adidas Originals Consortium release was up there to say the least. Classic models such as the ZX500 and Decade stripped down to the core elements resulted in an amazingly elegant and simple release. Move forward to 2012, and the Consortium range is back once again but this time with a twist.

This time around adidas have teamed up with some of the finest artists and designers from all over the world, using the 2012 Olympics as a focus of creativity. Photographer Shaniqwa Jarvis, Happy Socks’ creative director Viktor Tell, Kara Messina from UK brand Y’OH, and Illustrator Stefan Glerum are the partners involved in this drop. The selected individuals were asked to take inspiration from their own Olympic memories, and to simply use a selection of adidas models as a canvas to execute their ideas on. This second drop sees five shoes on offer, with plenty of classic adidas models in the mix.

First up is adidas’ very own take on the Baltic Cup model, which celebrates the 20th anniversary of their involvement in the Olympic Games. It’s a stripped down affair, with a return and use of unmistakable adidas aesthetics and style. The white upper combined with black brand details and blue accents on the tongue, are part of what made adidas so popular in the first place.

Photographer Shaniqwa Jarvis takes from her personal memories and experience, who as a child was a member of the swim team at the junior Olympics. Making use of the ZX500, her design inspiration is used subtly with the upper consisting of perforated premium suede materials in swimming pool blue. The shoe is finished off perfectly with dip dyed laces, which are inspired by lane divers.

Happy Socks’ creative director Viktor Tell uses the Matchplay as a canvas to get creative with. Viktor, a Stockholm native, took inspiration from a Swedish air pistol champion using the three stripes to place detailing of bullet hole inspired dots. There is also subtle creative use of the sock liners with one liner transforming the trefoil logo in to a target marked Luftpistol, and the other liner featuring a lid for bullets. The bullet holes also resemble the aesthetic found on Happy Socks’ products, which is a real nice play on the design.

Kara Messina, creative director of London based mens streetwear brand Y’OH, has one of the loudest designs in this collection. The upper is partly constructed of an African print fabric in leopard colours, which represents the multi-cultural existence in both the Olympics and London. The multi-cultural aspect is also displayed on the sock liner, with a ‘Peace Brother’ message that is a nod to courtesy and sportsmanship.

Finally, Amsterdam based illustrator Stefan Glerum utilises one of the most recognisable models in adidas history, the Decade Hi. The upper of the sneaker  is a simple affair, with a navy and white combination that is accented with a hint of red on the ankle collar. The mix of soft leather and nylon materials is a focus point on the upper, as are the small details such as the three crosses on the tongue, inspired by the Amsterdam city flag, and the illustration on the out sole of a woman pole-vaulting.

This is an incredibly artistic approach to footwear from adidas and it is executed so well. 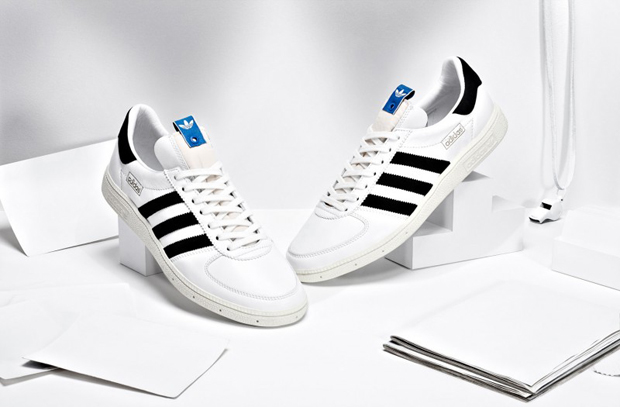 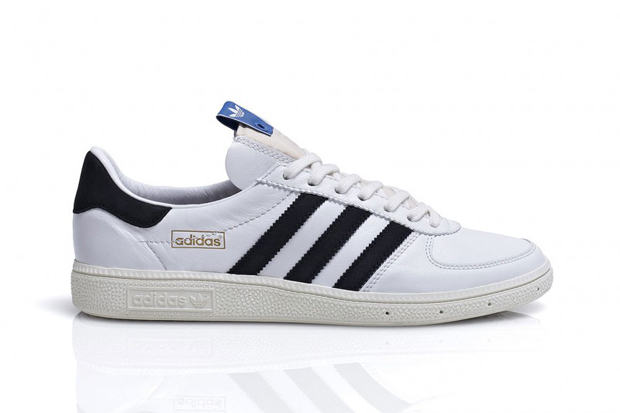 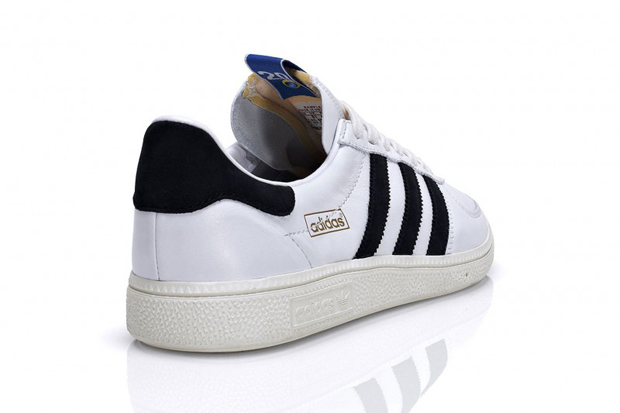 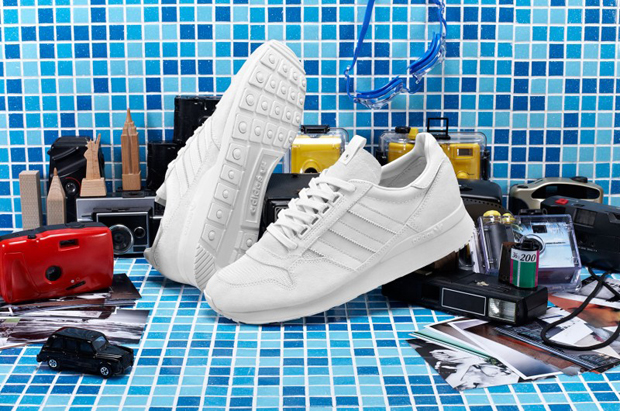 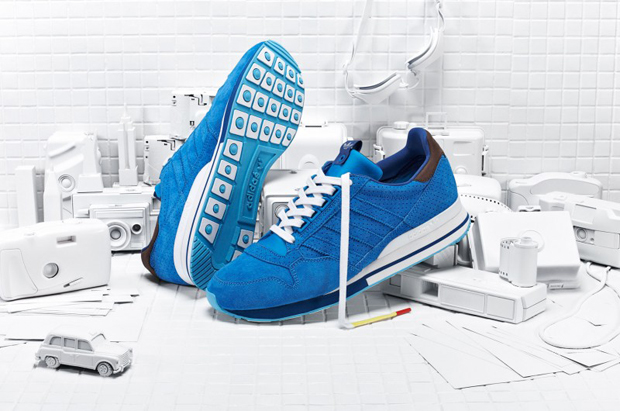 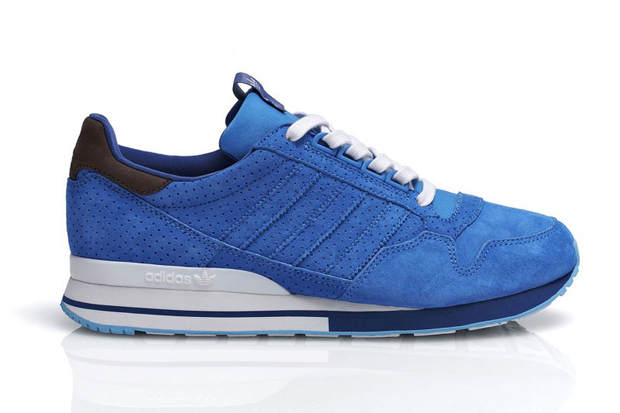 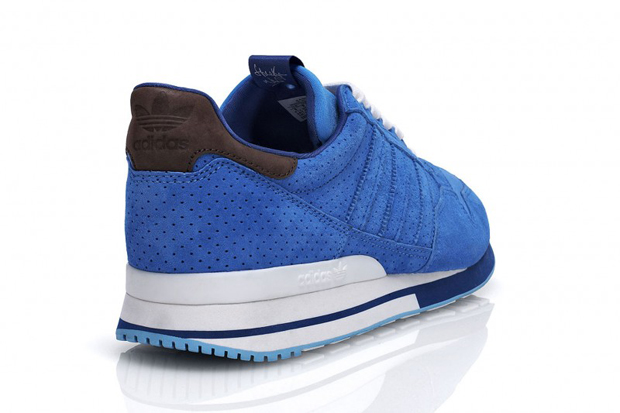 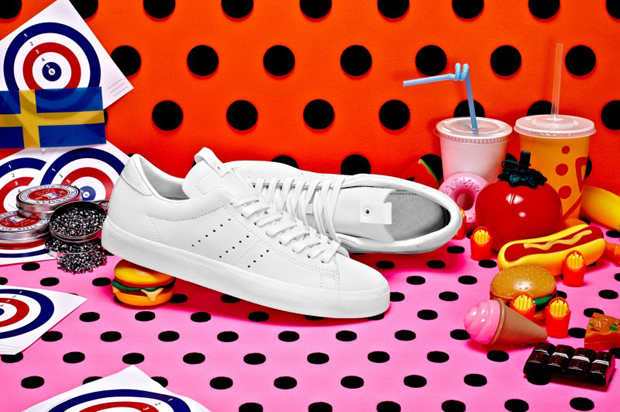 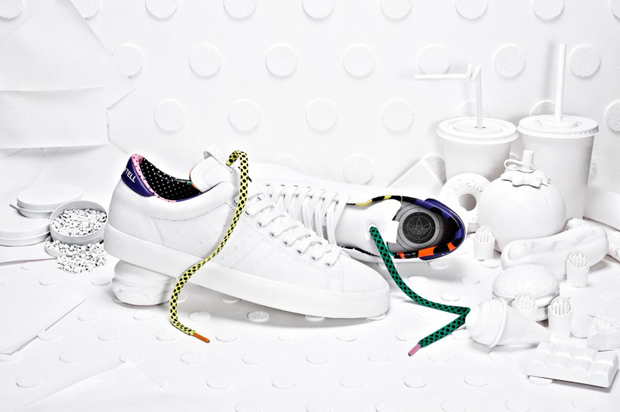 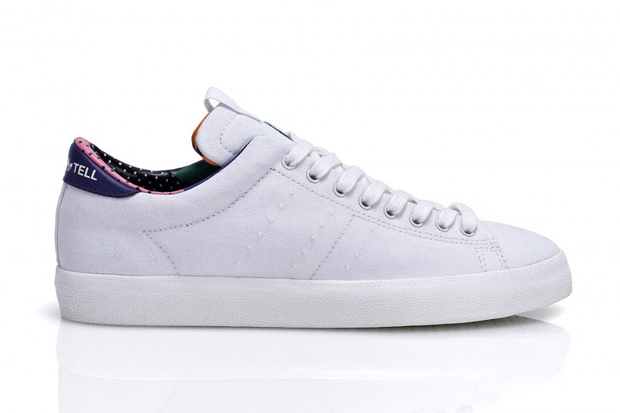 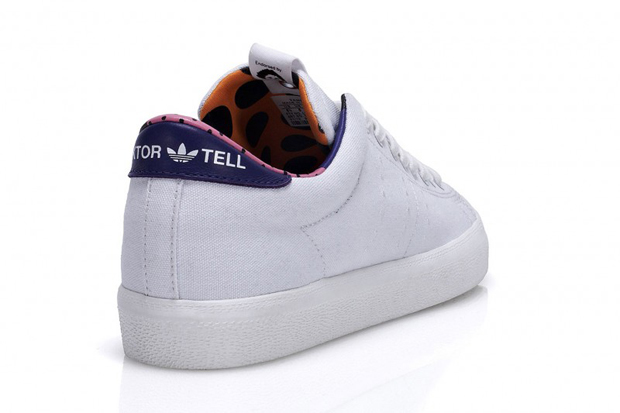 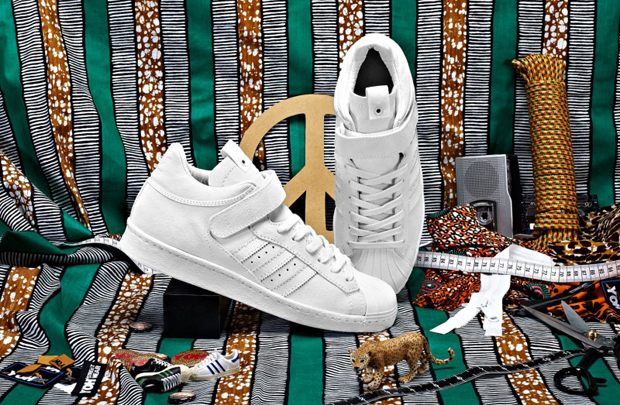 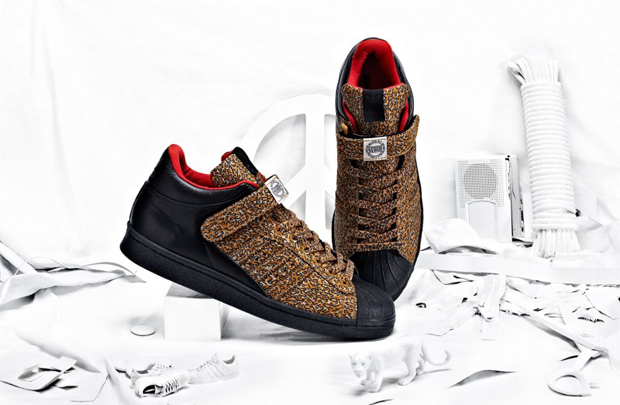 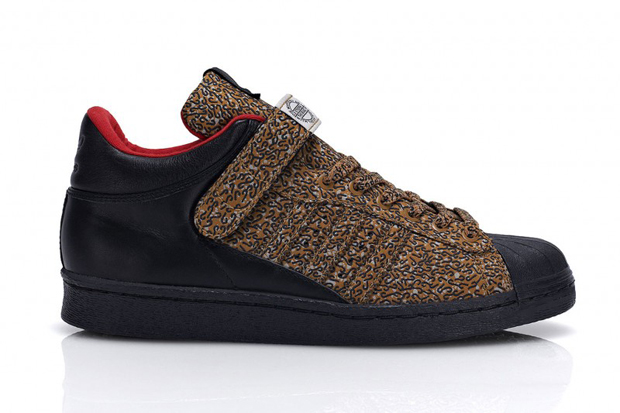 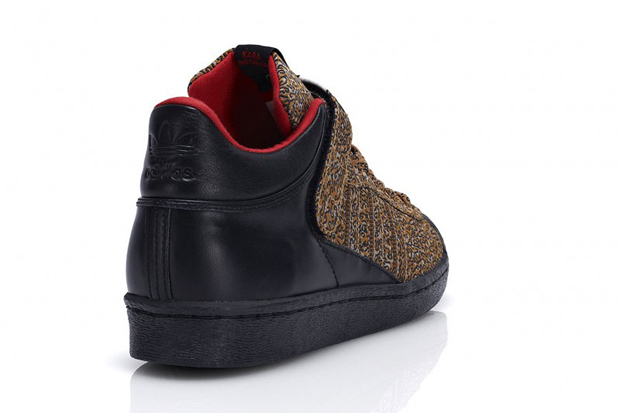 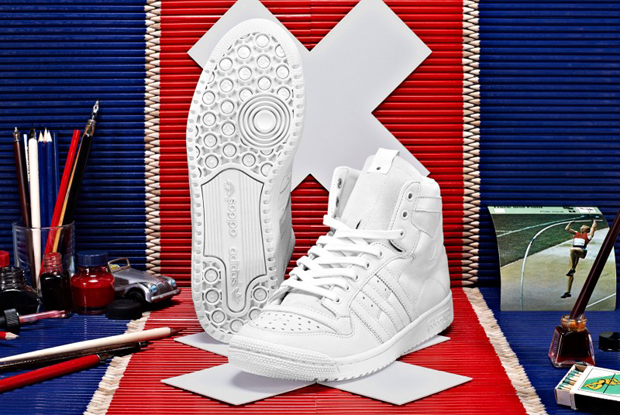 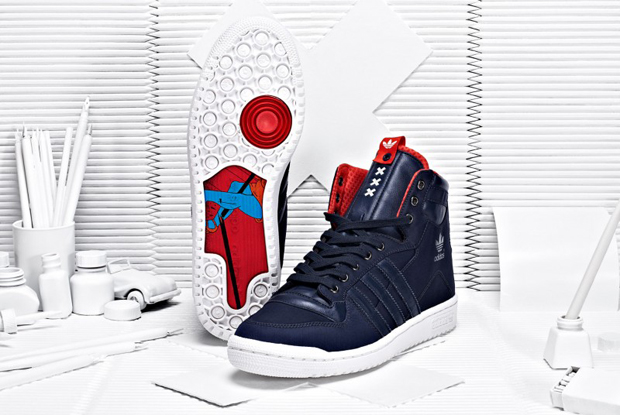 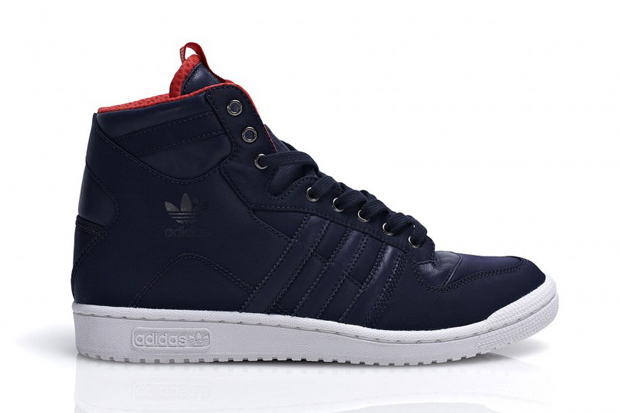 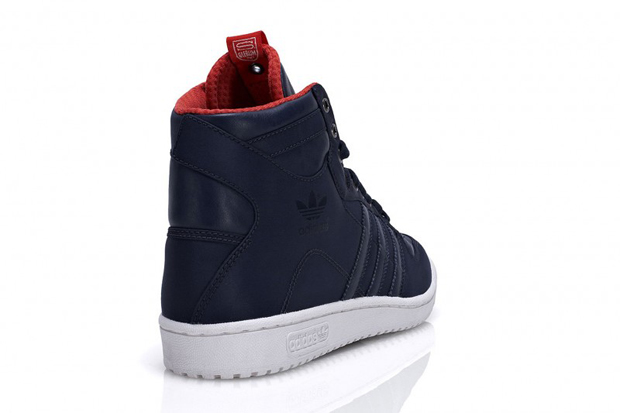