After introducing the Your Story drop two from adidas Consortium earlier in the month, we take a closer look at one of our favourite models from the collection.

The creative behind this particular model of the ZX500 is London based photographer Shaniqwa Jarvis. Although now based in our capital city, Shaniqwa is originally from New York and has racked up a beyond impressive photography portfolio, working with the likes of MTV, Supreme, iD Magazine, GQ, Liberty of London, Nike and Warp Magazine. It’s a nice list. In her own words, her style focuses on “the fleeting nuances and honest human outtakes that make each person compelling”. As you can tell, she is more than qualified for this project.

Now, on to the shoe at hand. This luxurious rendition of the ZX500 takes inspiration from Shaniqwa’s time in the Junior Olympics swimming team, hence this alluring blue suede shoe that would happily rival a Ronnie Fieg pair of Asics. The luxe suede appears to give off a similar shimmering appearance to that of a swimming pool, especially on the non-perforated toe-cap.

The use of perferation on the rear and side of the shoe is a brilliantly subtle way to introduce differentiation in materials without having to move away from the overall concept. The splashes of white and the two blue’s found in the sole unit remind me of school swimming caps. I don’t think they could have done a more precise job with the colour selection on this shoe. Finished off with an almost neoprene looking nylon tongue, this shoe is a masterpiece.

Expected to drop early next month, you can pre-order this ZX500 from Crooked Tongues now for £100. 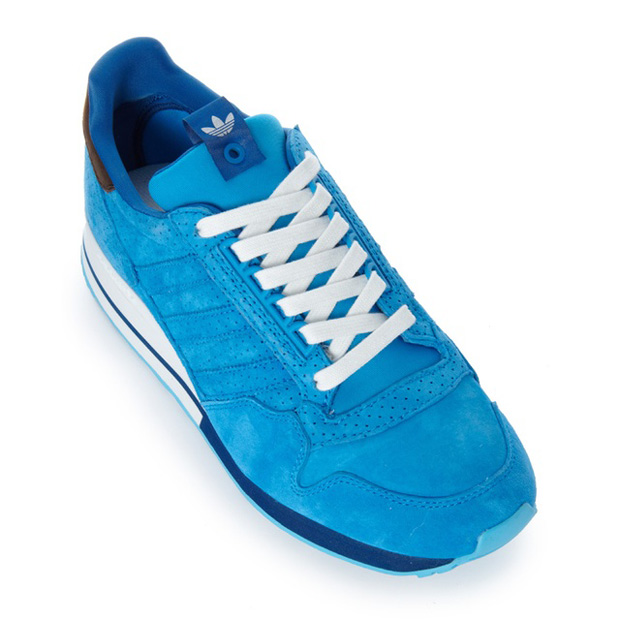