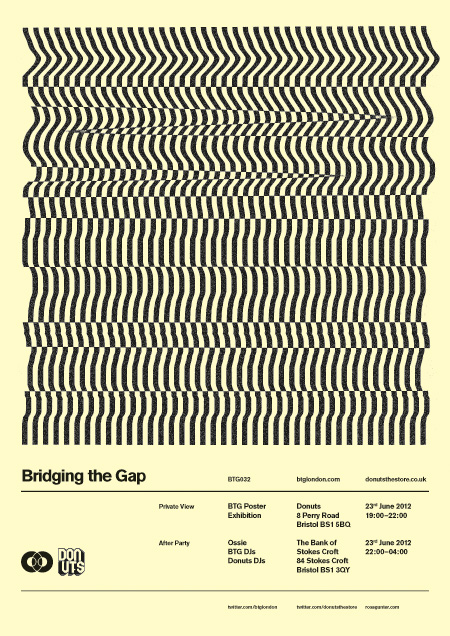 Bristol’s premium streetwear store Donuts highlight the masterful works of London collective Bridging The Gap this Saturday as they host an exhibition in store, and continue the shenanigans into the evening with an after-party in the city’s Stokes Croft district.

Made up of photographers, DJs, producers, designers and film makers, the collective display their inspirations on their blog and at their bi-monthly clubnights, run in conjunction with the Alibi. The exhibition held at the Donuts store will show the clean signature designs of Ross Gunter, the man who boasts the bulk of the works behind the BTG posters.

After sundown, affairs move along to the after-party at The Bank of Stokes Croft. Selections are brought to the floor in house by Donuts and BTG, and heading the bill is none other than Hyperdub’s Ossie, an artist who needs little sales patter and who’s aforementioned affiliation speaks volumes.

The exhibition kicks of in store at Donuts on Perry Road from 7pm this Saturday evening, until 10pm. The after-party will then run on until the early hours. More info at Donuts, Bridging The Gap and on facebook.