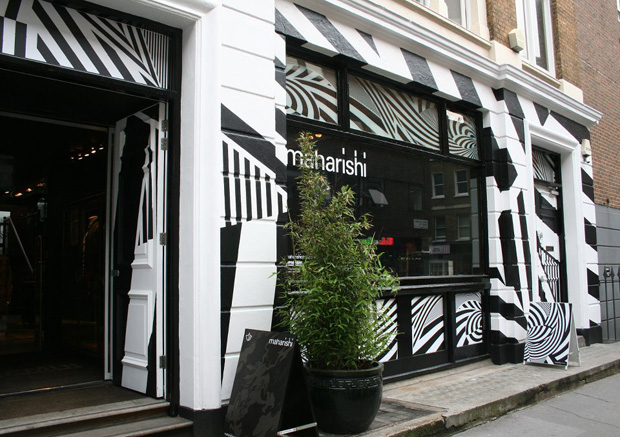 The folks at Maharishi have taken their recent love of the Dazzle camo print a step further by painting the front of their London store.

It’s no secret that Maharishi are a little bit passionate about camouflage, but over the last couple of years they seem to have fallen in love with the early 1900’s Dazzle camo print (aka Razzle Dazzle). Dazzle was developed in 1917 by marine painter Norman Wilkinson and was a form of camouflage that focused confusion rather than concealment for the British Navy. It’s got to be one of the few camo’s that does not attempt to hide an object and in fact draws more attention to it.

As for Maharishi’s recent obsession with the camouflage, it began with their collaboration with London Undercover back in December 2010 and is soon to be followed by a collaboration with G-Shock along the same lines (more info coming shortly). For their latest Razzle Dazzle adventure, they have repainted the front of their London flagship on Great Pulteney Street. Will this be a long love affair for Maharishi or will it soon come to an end?