Warning: "continue" targeting switch is equivalent to "break". Did you mean to use "continue 2"? in /nfs/c08/h04/mnt/122689/domains/thedailystreet.co.uk/html/wp-content/plugins/wp-author-box-pro/includes/ReduxFramework/ReduxCore/extensions/customizer/extension_customizer.php on line 442
 Interview: Professor Green launches collection with PUMA 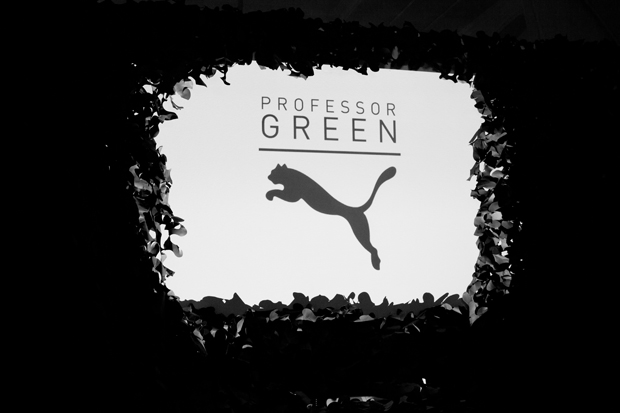 As the relationship between Professor Green and Puma deepens, we see the pair come together to create a collaborative capsule collection. We had a word with Pro to get his take on it.

Professor Green is no stranger to The Daily Street, so when we heard he was launching a collection with Puma, it just made sense to sit down and find out his inspirations behind the collection and how it came about. As far as rappers go, Professor Green is a pretty well dressed one. He is able to merge the territories of smart and casual better than most and remains sharp at all times. So, we were interested to see how this would be portrayed in his debut collection for Puma and just how much influence he had over the designs.

Due out in early October, expect to see a full review of the collection very soon. For now, check out the interview below, which is more than interesting, as is always the case with Professor Green.

How did the collection come about?

We started having a conversation and we flirted with the idea for quite a while. Then when we got serious about it, the first point was “OK, well it needs an identity” and I’d just seen that ‘Honey Badger don’t give a shit’ clip. Then it was like “How do you make a honey badger into a suitable logo for a t-shirt or even a brand?”. It took us a while ‘cos honey badgers are quite angry little fuckers really ain’t they? So yeah, we got this [points at logo] and that was kind of our starting point.

The other things that I really got into were the fabrics and the fittings. I was quite heavily involved in that side of things because I find just getting stuff that fits to be quite a process sometimes. Not that I’m an awkward build, but as clothes get bigger, they tend to get really boxy. So we’ve avoided all of that. The fabrics that we’ve used are all really heavyweight and we’ve got a really good varsity as well. I’m a big fan of varsities.

Have you had quite a big influence on the design of this collection then?

Yeah, because my thing from the beginning was that I’m not gonna indorse something that I can’t wear. So everything had to be wearable and stuff that if I saw in a shop, I would want myself. Otherwise there was no point in me doing it.

Is design a new territory for you?

Completely, but I do a lot of shopping. I buy a lot of clothes so I know what I like. I guess it’s kind of a similar process to the music in that it’s quite selfish – I only make music that I like. But that’s done me alright so far, so …

Did you find it much different being creatively in control of fashion rather than music?

A little bit because I’m less hands on in fashion than I am in music. I mean I don’t fuck with knobs on desks, that’s not my forte, I’d just press the wrong things, but I suppose yeah. It was always a collaborative effort and the team behind this were really cool, so it wasn’t hard. 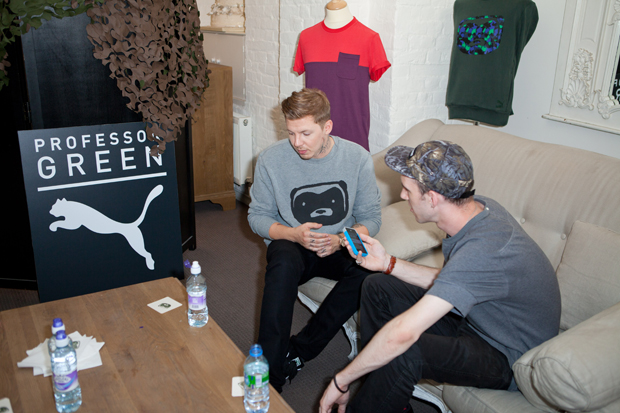 When did you start thinking up the ideas for this collection? How long has it taken?

Do you know what, we were pretty much behind the time. We were already too late in the year to really get it done, so we done it all really really quickly and the first time I saw the final samples was actually the day we shot the lookbook. So we’ve done alright really! It was quite fortunate that it all kind of fit and we liked it all, ‘cos if we didn’t, we’d have been fucked. So if we go forward and we do another season, we’ve got a little bit more time on our hands.

With fashion working on seasons, did you find it odd to think like that?

It’s the same as when you make music. I live with my album for so long before anyone hears it, so by the time people are hearing it and they’re getting to know it, I’m already writing my next one. It takes so long. Unless you record a freestyle and chuck it out on the day, essentially you’ve lived with what you’ve made for a long time, especially because you hear it in all it’s various stages. It would normally be the same with clothing, in that you see it through all it’s stages and through all the sampling, so by the time it’s done you’re familiar with it. But it’s brand new to everyone else, whereas your head is already on “What am I going to do next?”.

So have you started the next collection already?

We’ve got ideas. We’ve started talking about it, but again it’s getting pretty close to the time when we need to start having proper conversations. But yeah, we’ve got some work to do with this one yet before it goes stores in October. 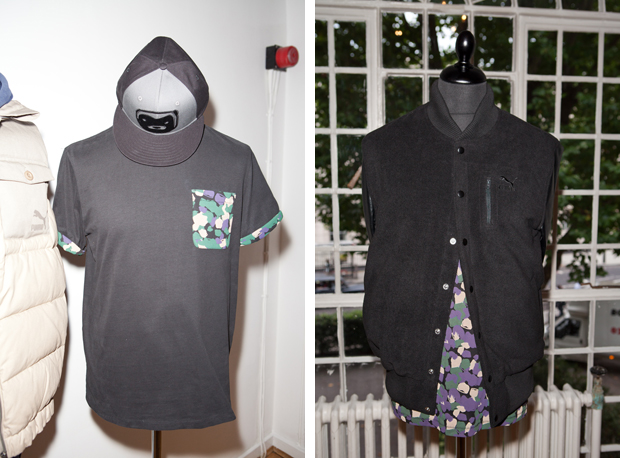 If you had to pick one piece from this collection as your personal highlight, what would it be?

It would be the varsity. Definitely. I’m a big fan of varsity jackets and it’s wicked. We have the lower price range one which doesn’t have leather sleeves and then you have the leather one, which is really limited as well.

There’s a lot of camouflage that incorporates the honey badger design. Where has this camo influence come from?

It’s really quite lifestyle. It’s all wearable, but the long sleeve polos and stuff are quite smart, so you could wear it casually or slightly smarter. It’s all that kind of high end streetwear, more sort of lifestyle stuff, so it’s not in the top bracket, it’s right in between, so it sits kind of everywhere. It’s wearable.

Is that important to you that it’s multifunctional in that sense?

Yeah, because I suppose more often than not, sort of smart-casual is what I do. It’s not scruffy, but it’s not a suit. And I wear t-shirts to most places, irrespective of whether I’m expected to show up in it or not. I like to surprise people. 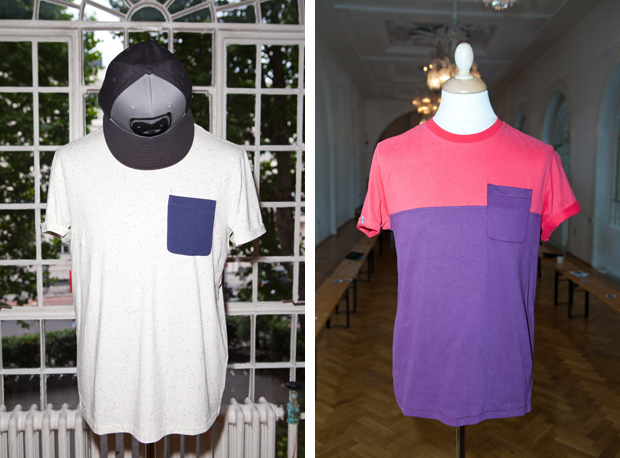 When you were coming up with the collection, did you design it with a consumer in mind or was it completely for yourself?

I suppose I was definitely aware of my fan base, but also in what I wear. So everyone from a 13 year old who might listen to my music to a 25 to 35 year old who might listen to my music who would have similar interests, who would do similar things. It fits right across the board. I mean, a little kid’s mum would be well happy to put him in that [points at one of the polos]. It would be like “That’s smart”, but the kid won’t be like [groans] and feel all frumpy … ‘cos it’s still cool.

Although a few of the items have quite big branding in regards to the honey badger, other than that, the Professor Green branding is pretty minimal. Was that important to you?

Definitely. I prefer cool little details, like on the t-shirts if you turn the sleeve up, you’ve got the honey badger on the inside of the sleeve. I like the little things. I’ve always been into detail, it’s the small things. It’s like when someone listens to a song and they don’t get everything the first time. I still get stuff from albums that I’ve had for 5 and 10 years and you hear something and all of a sudden it makes sense. It’s cool. It’s the little bits that people don’t notice, but subconsciously make it what it is.

The first time we interviewed you you mentioned that one of your favourite brands was A.P.C. Did you take influence from your own wardrobe for this collection?

I suppose so yeah. Yeah, definitely. I suppose it just comes back round to being stuff that I would wear … and there’s a lot of that in my wardrobe [laughs]. There’s a few bits in there and a couple of bits that I don’t wear anymore, like the XXL Avirex’s which I couldn’t face getting rid of but would never put on my back ever again. 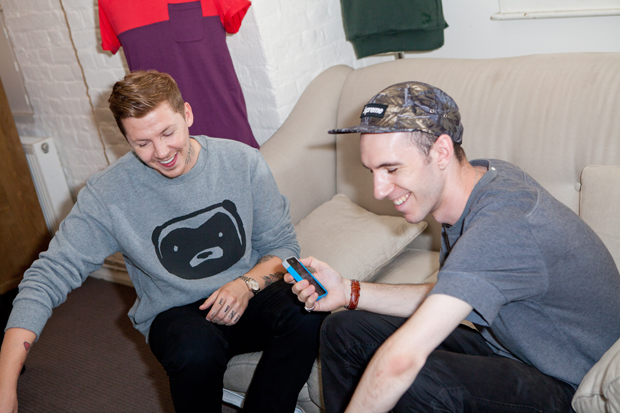