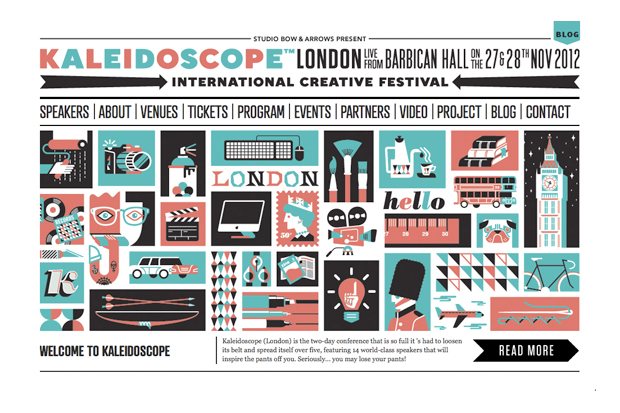 This week I was really excited to hear all about the launch of a new conference taking place at London’s Barbican Centre later this year. Celebrating creative culture and taking in the influence and voices of some of the industry’s most talented and successful names, the Kaleidoscope festival looks to be a lot of fun.

With guest speakers including Johnny Cupcakes and Mcbess and a load more to be announced, the festival will also incorporate a week of hands-on workshops, exhibitions and networking events around the two day show. With artists, designers, illustrators, filmmakers, animators, photographers and more all in attendance, it looks set to be a hugely inspirational occasion.

Kaleidoscope is also driving the Cut-It-Out Project helping to support disadvantaged young adults in the UK by identifying their potential for greatness. You can read more about it here.

The initial announcement is just the beginning, with loads more information to come about the speakers themselves as well as the list of events that will surround the conference, but I’m already really excited to be there and be a part of it all. There’s loads more information at the Kaleidoscope Festivals site, where you can now buy early bird tickets too.

The team behind the festival (made up of designers Timba Smits, Greg Beer and Gordon Shaw) have put together a pitch via indiegogo to help find funding for the project. You can pledge as little as $10 all the way up to $100,000, but if you can’t spare the cash, you can also help out by leaving a comment or sharing the page on facebook and twitter. Check out their video, put together by Suffoca, below.