Warning: "continue" targeting switch is equivalent to "break". Did you mean to use "continue 2"? in /nfs/c08/h04/mnt/122689/domains/thedailystreet.co.uk/html/wp-content/plugins/wp-author-box-pro/includes/ReduxFramework/ReduxCore/extensions/customizer/extension_customizer.php on line 442
 Carmelo Anthony of the NY Knicks talks about his new Jordan Melo M9 shoe 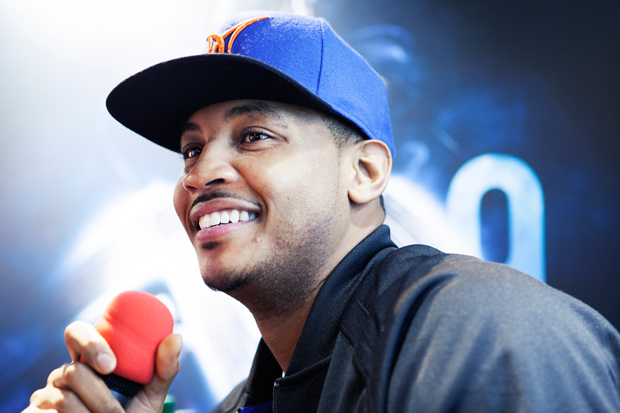 On Wednesday evening we headed down to House of Hoops by Foot Locker on Oxford Street to interview New York Knicks’ shining star Carmelo Anthony about playing the game and his brand new Jordan Melo M9 shoe.

In town for his game against the Pistons last night, which he one, we weren’t going to pass up the chance to grab some time with Melo, especially when his latest signature Jordan shoe has just landed over here. During the interview Carmelo touches on the impact he hopes to have on the sport of Basketball, his feeling towards London, what makes Michael Jordan so special, his first ever Jordan’s and the input he had in the design of the Melo M9.

The last time you were in London, you left with a gold medal. What do you remember most about your stay here in London last year?

That was my first time actually here in London, that Summer. I came over with the team and we really focused on winning that gold medal, but we made it fun throughout the whole process. As we was on our journey to the gold medal, we made it fun, we got along with one another and we made it worth our while – we got out, we went around London, we embraced London, we walked around like we was regular people and we engaged ourselves with the fans.

That was the third time you’ve played in the Olympics. What is it about that experience that keeps bringing you back time and time again?

As an athlete who lived in London for four weeks, what’s your take on the city?

Well the energy is a lot like New York, especially the time that we spent here. We was here in the Summer time, so you felt the energy, you felt the people walking around you. You felt that vibe. It reminds me a lot of being in New York in the Summer time – the energy, the excitement, just walking around the fans and people. The likes and the dislikes of New York. The fashion sense out here, the art world out here, it’s a lot like New York City.

You mention fashion in London. Have you noticed any particular fashion style here that’s caught your eye? 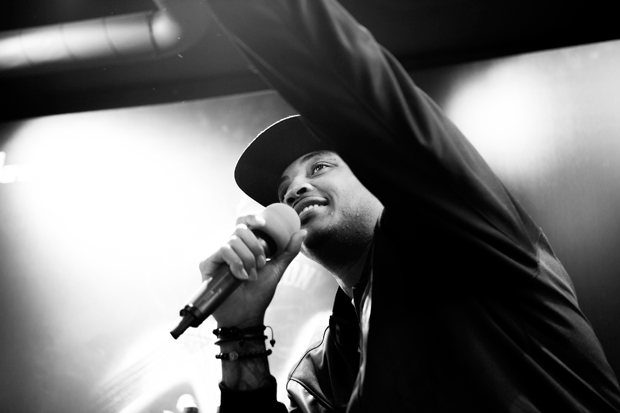 What’s it like to play in New York City?

What kind of style do you play on court? How would you define it?

I don’t think I could really put a word on it. Maybe my fans out there could describe it, but as far as I go, it’s just ‘get the job done’. Whatever it takes, by any means necessary, get the job done. So you know, I like to have fun out there on the basketball court ‘cos when you’re not having fun, it makes the game that much harder to go out there and be at your best.

What influence do you think you have in the game?

When I’m done and sitting back and reflecting back on my whole career, I want to say that I did everything that I was supposed to do and left a mark on the game of basketball. As long as I can say that, then I’ll be happy.

You’ve been mentioned as an MVP candidate this year. How important is that to you, to be in that bracket?

Just to be named with some of the other great players that’s in the NBA, as far MVP talks, it’s always good to hear. That means that you’re doing something right. The team is winning, we’re playing extremely well and when you’re team’s winning, a lot of good things happen. Winning is a cure for a lot of things, so as far as we keep doing that, there ain’t no telling what can happen.

How do the fans react to you now that you’re on that roll with the team? 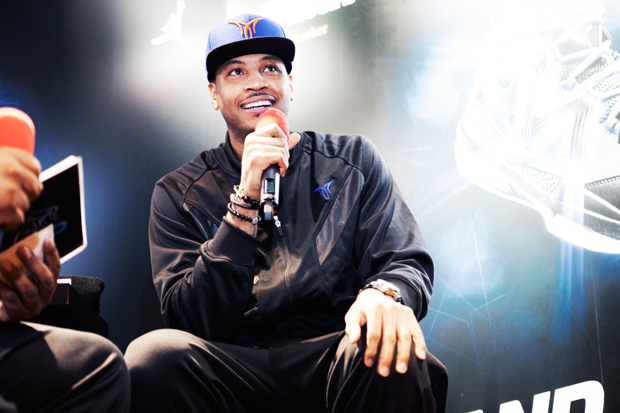 You’re here to launch your new Jordan Melo M9 model. Tell us about your relationship with Michael Jordan and what it means to be part of the Jordan brand …

Well first of all, this is my tenth year being part of brand Jordan. I’ve seen the brand go from here to here, just as far as the direction it’s trying to go, different players coming in and out, being in meetings day in and day out trying to figure out what’s the next thing. “How can we engage the consumers out there?” “How can we put out the best product?” That’s a blessing for me, to just be a part of brand Jordan. To have my own brand under the Michael Jordan brand, you can’t explain that.

What input did you have in the design of the Melo M9?

Well my input and my inspiration for this particular shoe, I’m a big time watch collector, I’m a big time watch guy and I love the movements in watches. When you open up a watch and you see the technicalities in the watch and the movements in the watch, that was something that I really wanted to try to incorporate and do something different while designing this shoe.

If you look at the shoe [pointing at the giant picture beside him], on the side of the shoe it’s something that we kinda incorporated as far as the automion movements inside of a watch. So we kind of did it in a shoe form. This is something minor that we did. Also, the Brooklyn Bridge. I was born in Brooklyn and if you look at the side of the Brooklyn Bridge, that’s kind of how the Brooklyn Bridge is shaped [pointing at the FlyWire pattern] and how it intertwines and things like that. Those are the two main inspirations in this shoe. And I wanted to go lighter. I wanted to make the lightest shoe that I could possibly make, but still be able to perform out there on the basketball court.

What was your favourite Jordan shoe when you were growing up?

My favourite Jordan probably was the Jordan IX’s. That was my favourite pair. I actually played in them in high school. That was one of my first pair of Jordan’s ever, the Jordan IX’s and the Cement III’s. They were my first two pair of Jordan’s that I ever owned and it took me a long time to get them … I had to wait until high school when somebody actually gave them to me for free.

What made Michael the best?

What he stood for. He was a hard worker, he believed in hard work paying off and he left a mark on the game. It’s all about becoming legendary and Michael Jordan did that. When he played, he changed the game, the way people watch the game of basketball from a work ethic stand point. People understood how hard he worked and he’s doing the same thing when it comes to his brand.

Which player did you look up to when you were a kid and why?

Of course Michael Jordan, that goes without even saying. But, my favourite player growing up and of all time is Bernard King. I’m a big fan of Bernard King and I love the way he played the game of basketball, I love the way he put his all into the game of basketball, what he was able to do out there. And let’s face it, he was probably one of the best scorers of all time out there.

Thanks to everyone at House of Hoops and Nike, and most importantly to Melo for his time. 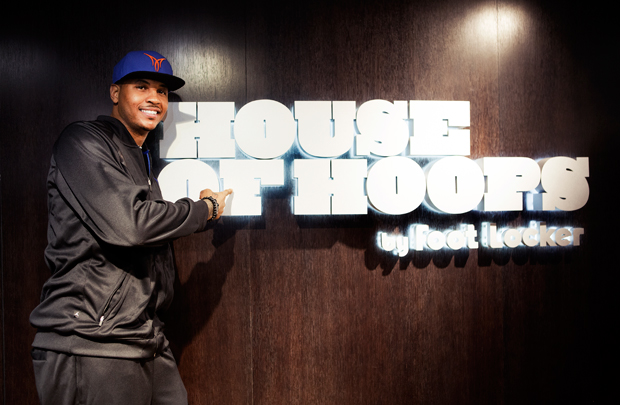