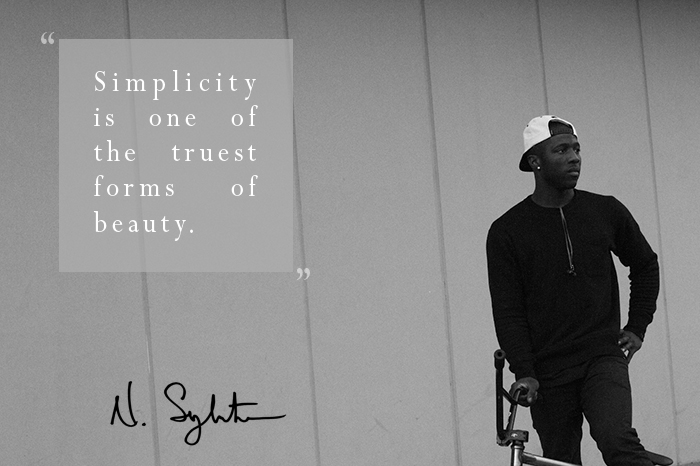 With his latest “Blackout” G-SHOCK collaboration hitting our shores this week, we sat down with pro BMX rider Nigel Sylvester to discuss his inspirations behind the watch, his love for simple design and his favourite spots to ride in the UK.

It’s always a true pleasure to meet someone who is genuinely passionate and enthused for what they do and what they love, regardless of what field that is, and Nigel is a true example of exactly that type of person. As we started to discuss his personal history with bicycles, his beloved New York City and what inspired his recent G-SHOCK collaboration, it became instantly clear that this is a man driven almost entirely by passion. If he feels that something moves him, that’s what he’ll do. It’s a simple way to approach life and one that I’m sure most people are very envious of, as it’s not one that many people have the bravery to attempt to live. Nigel was inspirationally open and humble in his answers and you could see with every one that this was a man who lets his creative passion and influences run free and open, which would explain how he’s managed to make a near perfect all black everything G-SHOCK. Something so simple, yet so enticing.

Enjoy the interview below and I hope it is as inspiring to read as it was to hear from the man himself.

What first got you into BMX riding?

When I was about 5 or 6 years old I used to ride this Big Wheel around in my Grandma’s driveway and one day I was just pedalling it, going super fast, being a very adventurous young kid and I kind of just locked the front wheel up on the Big Wheel, ‘cos you know the pedals are on the front on a Big Wheel. I locked the wheels up and I kind of just did a drift. My cousins were in the driveway watching me and they were like “Dude, do that again!” and I was like “OK!” being a young kid wanting to impress my older cousins, and I did it again and they were like “Yo, that’s crazy!”. So they set up cones in the driveway and told me to do it around the cones, so I started drifting on my Big Wheel at like 5 years old.

So originally you’re a drifter?

Yeah I guess I’m a drifter [laughs]. I started drifting on my Big Wheel and the love for bicycles, that’s when it started, there. And from there it turned into this addiction to the feeling that bicycles gave me, the feeling of freedom. It’s limitless and I didn’t want to let that feeling go … and I still don’t.

If that younger you could see you now and how far you’ve come, what do you think he’d say?

Have you always been a G-SHOCK fan?

I’ve been a G-SHOCK fan for a long time now. My older cousin gave me a hand-me-down watch and it was just one of those things that I was like “This is the coolest thing ever!”. My older cousin and older brother, they had so much influence over me as a young kid ‘cos I would look up to them like they were my super heroes. They were the coolest people I knew and they still are some of the coolest people I know. I’m just a big fan of what they do and I admire them.

Do they ride as well?

My older cousins used to ride bikes and fix them up and just had nice bikes. No one rode how I ride, but we all indulged in bike culture, wether it’s a bicycle or a motorcycle.

You must hit the ground pretty hard from time to time. Have you ever managed to break a G-SHOCK while riding?

No, I haven’t broke a G-SHOCK yet. They’re made to stand up against elements, so they’re super super durable, super tough and consistent. It works.

What’s the story behind the All Black Everything approach to your G-SHOCK GD-101NS?

Black is the colour I associate a lot with. There’s so many things I draw off of black. When I say that, I mean like black is beautiful, black is timeless, black is consistent, black is humbling, black is bold, I can go on and on and on. This is my interpretation of the colour black. Also, I associate black with New York City and New York City was also a big inspiration behind the piece. New York City can sometimes be overwhelming, intense and chaotic and confusing, but it can also be beautiful and simple and effortless and I wanted to get all those things across in the piece. That’s why I did different tones of black and I also did the safari print, which kinda goes along with the New York City, concrete jungle, safari, chaotic, in a black tone as well.

We also put these little intricate details that those true G-SHOCK fans can appreciate. I wanted to speak to them as well, so we did black screws in a black back casing, which is something that G-SHOCK doesn’t normally do a lot, but we did it for this piece. It was something that was one of those small details that you might just overlook, but when those true G-SHOCK fans get the piece, they’re gonna appreciate it. I just feel that simplicity is one of the truest forms of beauty.

The name “Blackout”, is that a reference to the infamous New York City Blackout of 1977?

[laughs] The name Blackout is a reference to the watch being an all black piece, and also to the video that we did.

The video that goes with the watch has a definite high fashion aesthetic to it. How much of that was your influence over G-SHOCK’s?

All of it was my influence. That’s one of the reasons why I really really appreciate the process of working with G-SHOCK; they give me the creative freedom to do what I want. Of course, there’s certain things we have to get across as a brand, but they give me the freedom to execute what I want and to really express my vision. So when the piece came about, it was like “you want a piece, something that lines up with our brand, but go do what you feel is right” and we created the piece and they loved it, I loved it, and it was just a true expression of where I am right now, creatively.

I like to collaborate with other creative individuals, that’s why there’s a lot of familiar faces in the visual, and also just show my New York. I want to share my New York with the world. I want to share my story with the world. That’s so important to me. Im a kid from Queens that becoming a professional BMX rider was not in the plan, but I broke that mould and did exactly what I wanted to do and I do what I love and that love is coming through now with a piece like this. With such a big brand as G-SHOCK, I get to collaborate my vision and express myself, and express my love.

Is product design something you’ve always been into, or is this the first time you’ve really explored it?

I’m into design. When I was younger I went to art school for a little bit. I used to draw a lot and I still doodle now if I’m just bored, I’ll get a pen and paper and I’ll doodle. Just creating. Just always creating. Forever evolving and creating is something I’m into. I’m always looking forward to just making something new, taking my surrounding and my environment and just making something out of it. That’s just how I express myself. So wether it’s designing a watch or a bike or a clothing item, whatever it may be, I’m always looking to put my stamp on it.

In extreme sport culture as a whole, not just BMX, style and fashion seems to be becoming more and more important and prominent. Why do you think this is?

I think that’s just culture right now. Also, I feel if you look good, you feel good. And we’re evolving as action sports athletes. Our fan bases are growing, we’re more in the public eye, so you have to be suited for that and for me personally, I’m from New York … fashion and style is a no brander [laughs]. Growing up and going back-to-school shopping, if you get something and then your friend gets one thing better you have to go back and up him. It’s like this competition amongst you and your peers when it comes to fashion and dressing up and you always wanna be creative and you always wanna outdo everyone else around you. It’s like you have to continually progress, and that’s something that comes across in fashion all the time and I think about it all the time too. 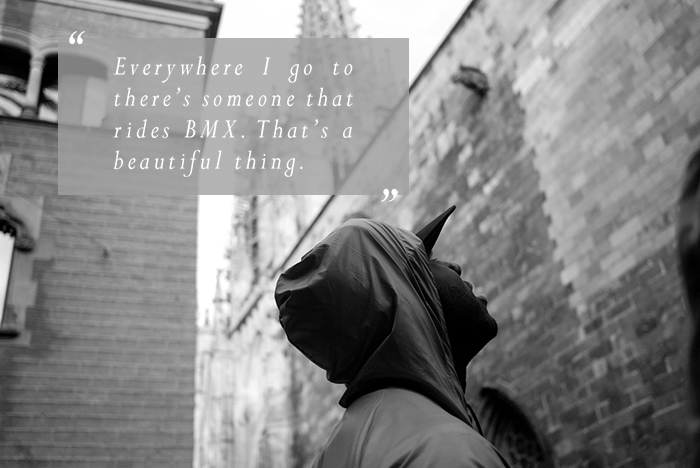 Talking about action sports being more in the public eye lately, and more specifically BMX, what are your thoughts on BMX becoming an Olympic sport?

I think it’s dope that the sport is growing. It’s getting recognised on such a big platform. It’s incredible because now you have more BMX riders that are able to tell their stories and I feel like telling a story is something that the world relishes. The world is just concrete on it’s stories. You know, you run to one of your friends and yell “Guess what happened to me last week” or “This is what I wanna do in the future”, we’re always exchanging information and I think that’s what makes the world go round. So I think it’s important and I think it’s a great accomplishment that BMX is now an Olympic sport, especially the Olympics being such an iconic event globally. BMX is something that people participate in all around the world. I’ve travelled to so many places around the world and everywhere I go to there’s someone that rides BMX. That’s a beautiful thing.

What are your favourite spots to ride in the UK?

Wow, umm, I’ve only been in London a handful of times and each for like a day or two. Of course, I’ve been to Southbank a few times and that’s a super iconic famous London spot.

They might be getting rid of that spot soon actually.

Oh really?! That sucks. That’s sad. That’s one of the spots that I actually know. Other than that, I don’t know too many spots ‘cos with BMX riders we go and travel around cities and scour the city looking for stuff to ride, so those things might not have a name, it could just be a rail on XY street, but Southbank is definitely a place I go and I’ve been to and I have fun there. I’ve filmed video clips there before.

It’s always a pleasure to see a spot in a video or a magazine, especially if it’s somewhere else in the world, and you get to go there and actually ride it yourself, you’re so excited like “Oh my God, I’ve been seeing this place for so long and I finally get to ride it now!”. It’s just one of the dream come trues.

Be sure to check out Nigel’s “Blackout” G-SHOCK GD-101NS and watch the video. Thanks to Nigel for his time and insight into his thought process.