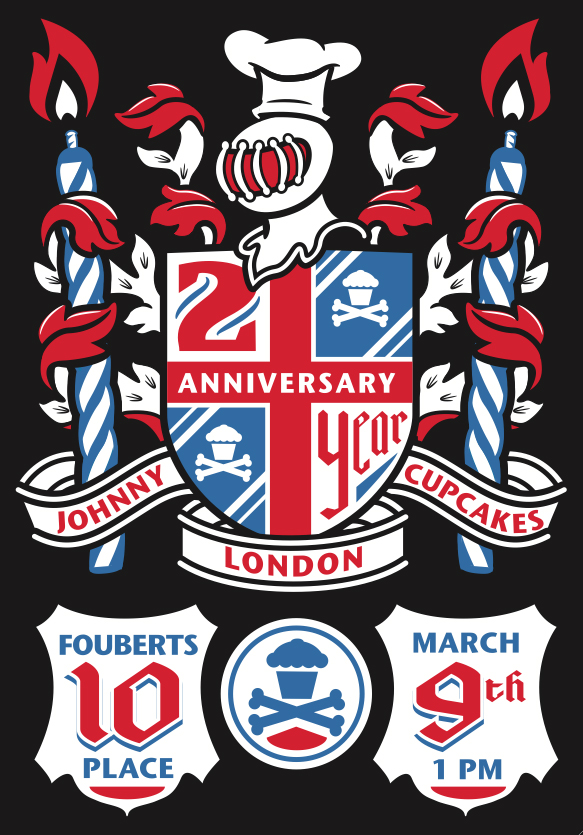 It’s hard to tell where the time has gone, but this coming weekend Massachusetts born Johnny Cupcakes will celebrate the 2 year anniversary of opening their London store.

In typical fashion you can expect a legion of fans in their favourite historic JC pieces to turn out for the event, with the intention of scooping up some of the limited edition T-shirts and other goods available on the day. Johnny himself will make the trip to London for the celebrations and will also be hosting one of his popular lectures on Monday March 11th. Titled ‘Reinventing Your Ideas: How The Little Things Yield Big Results’, the lecture is a chance to hear the unique Johnny Cupcakes story first-hand and is bound to be of huge interest to budding designers and brand owners. You can read more about it here.

I have thoroughly enjoyed watching Johnny Cupcakes’ London journey unfold – news broke of the opening of the brand’s first non-US store in September 2010, we were there when it opened in March of 2011, and for the first SITCM Launch in London later that year. Last year we watched as the store celebrated it’s 1st Anniversary with commemorative T-shirts and poster prints, and we’ll be there to experience it all again this weekend.

Johnny Cupcakes London will celebrate their 2 Year Anniversary on Saturday 9th of March, for more information head to Johnny Cupcakes and follow the store on Twitter.