Warning: "continue" targeting switch is equivalent to "break". Did you mean to use "continue 2"? in /nfs/c08/h04/mnt/122689/domains/thedailystreet.co.uk/html/wp-content/plugins/wp-author-box-pro/includes/ReduxFramework/ReduxCore/extensions/customizer/extension_customizer.php on line 442
 10 1990s running sneakers Nike shouldn't forget 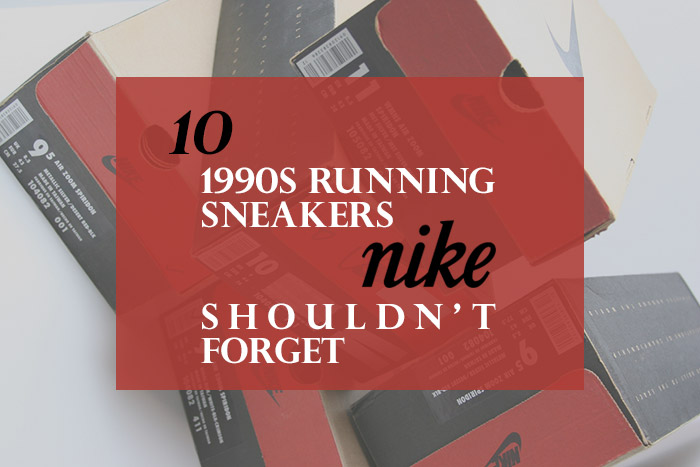 With a select few models from the early ’90s and late ’80s Air Max range getting increasingly popular of late, we take a look back at some of the unsung heroes of 1990s running sneakers from the Nike camp.

Nike are the undisputed kings of re-issues, regardless of the irritating changes in details or shape we all go mad when they drop something old, again. Somehow we still go mad when they drop something old again, and again, and again. And sometime we just don’t want to see a model leave the shelf, like the trusty Air Max 1 that has crept its way into popular culture, dragging sneaker culture into the limelight along with it. But that comes as no surprise really, considering it’s probably the most loved sneaker of all time in the UK and it was only a matter of time before the majority of people started cottoning on to why we all love wearing sneakers – they look rad, they feel great and they’re moorishly addictive.

With this new generation coming through, encouraged by blog hyped re-issues and collaborations, we thought we’d shine some light on some of Nike’s footwear achievements from the ’90s that you may not know about or may have forgotten about. It also serves as a not to subtle wishlist of re-issues for Nike (nudge nudge, wink wink). We didn’t want to get too biased, so the list is organised by release date, rather than personal preference, leaving you to decide which is your favourite. 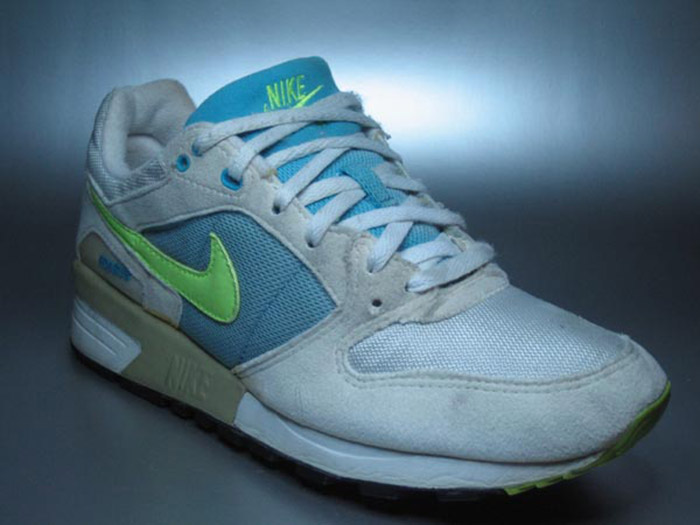 The Air Pegasus line is still one of the best things Nike have ever done. It’s the definition of unsung and underrated when it comes to Nike runners. Yes, the ’92 got a brief reissue lately and yes, the ’89 has been given a wealth of inadequate makeups since it’s OG reissue in 2008, but people still don’t appreciate the hidden wealth in the history of the Pegasus line.

This is a prime example, sneaking in between the ’89 and the ’92, the Pegasus ’91 is reminiscent of both with the best bits from both and a few bits of its own. It has the awesome plastic side paneling that went on to feature in the ’92, but better and without the bulky upper. It has a slender sole unit like the ’89, but it has the early sightings of techy attitude that the ’89 lacks. The Pegasus ’91 also happens to come in some incredible colourways, but that will come as no surprise to those who are familiar with OG Pegasus colourways. 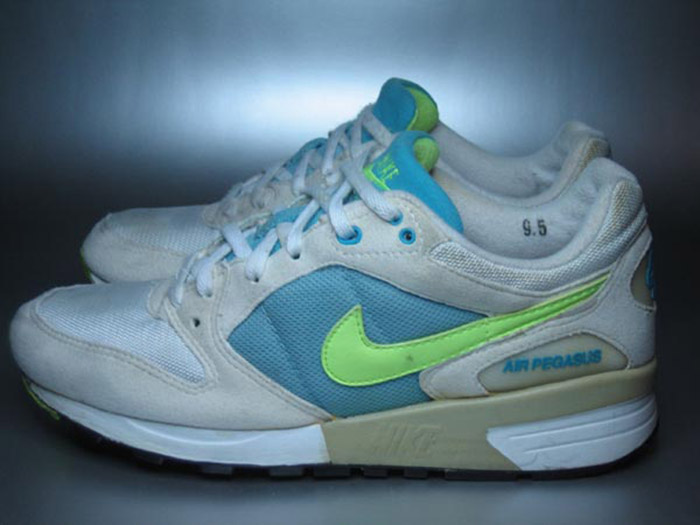 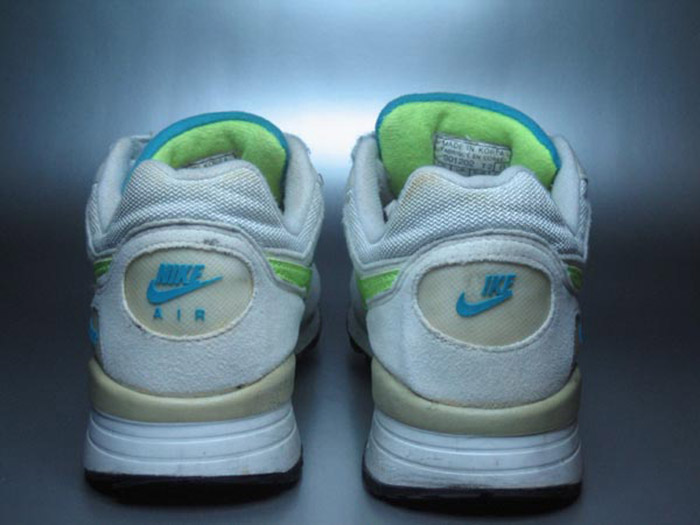 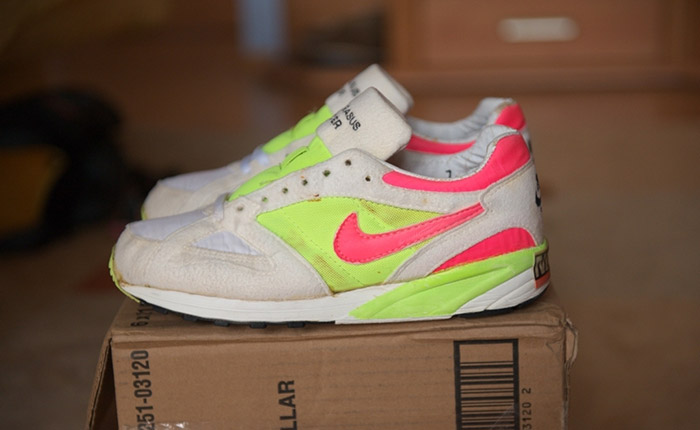 Firstly, let me just clear up that this is not a list of Pegasus shoes. It’s coincidence that this pair is next in line, but it’s useful as an example to stress my earlier point about the wealth of the Pegasus line. Here we see a pair of Pegasus Racers from 1991, a shoe that takes quite a different direction in midsole design from the normal Pegasus shoes of the time. It also puts those early ’90s neons to fine use, such as Hot Lime, Laser Blue and Solar Red, but always with a predominantly White upper. The minimal branding on the tongue is reminiscent of the Mariah PR of 1988, another running great that saw a reissue in 2010. 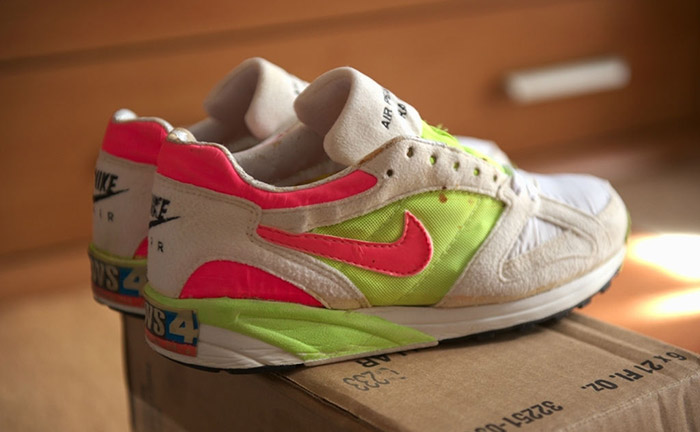 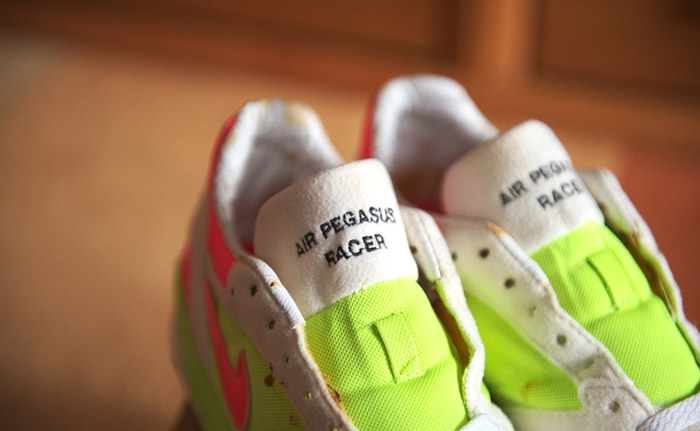 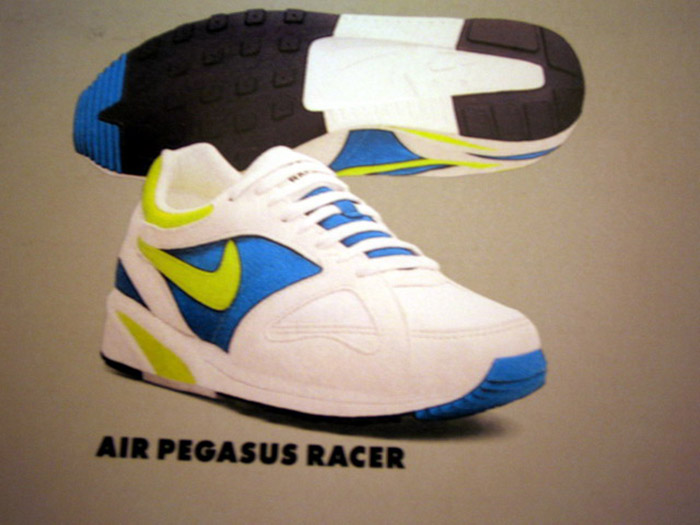 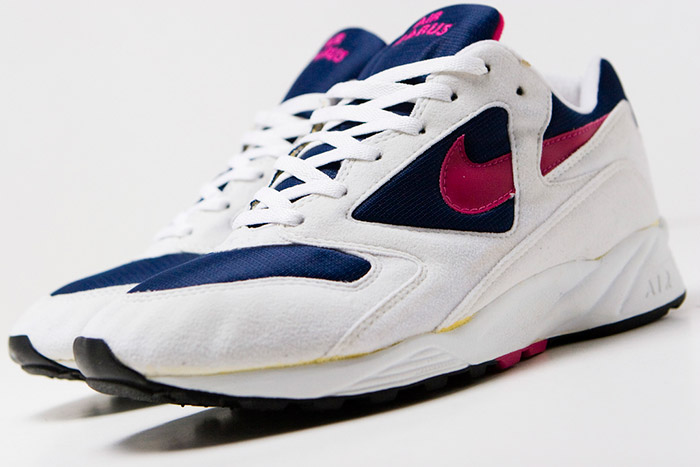 The Air Icarus line is a popular favourite with vintage collectors, often finding its way onto tumblr via some exceptionally well executed and lonely looking photography on Flickr (we thank you for it). This is the Air Icarus Extra, a lesser seen model from 1992 that quickly succeeded the original 1991 Air Icarus. This model actually came very close to being reissued in 2010, all be it in some tragically boring colourways, but never made it past the sample phase. Personally, we’re happy they didn’t do it an injustice with the proposed colourways. Maybe with the success of the recent Air Base II reissue, we’ll see that project given some new life and some deserving OG colourways. 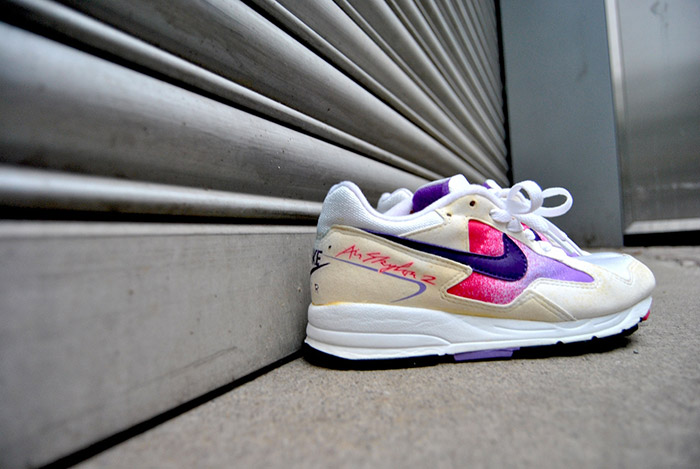 The Air Skylon first dropped in 1990, but it is its successor that has all the character, the Air Skylon 2. This is a great example of an era where Nike did running kicks for both guys and girls exceptionally well, but then again it was a bit of a unisex era as a whole. It seems that with this shoe Nike really embraced some of the trends of the late ’80s and early ’90s with that hand written typeface and mouthwatering colour fade on the side panel. There’s little else that needs to be said about this unisex beauty. Breathe it in and pray they see the light of day again in the future. 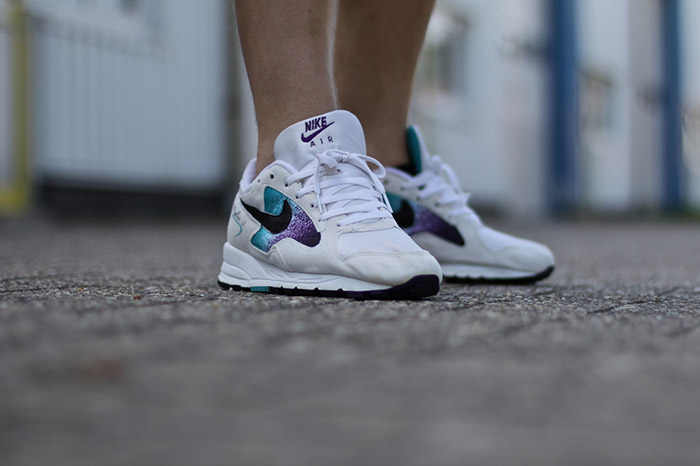 The Air Max ’93 is probably the most well know shoe in this selection. It’s born of the era where Air Max started to meet Huarache, with the Huarache sock system and toe cap coming into play on this model (much like the previous Air Max 180 and ST). It’s a crossover that wasn’t really seen again until the favour was repaid with the Air Max ’93 sole unit finding its way onto the Huarache Light Burst in 2004 as a hybrid. But alas, it was named after the 1994 Air Burst with the same sole unit instead. This shoe was also the first Air Max to ever have a coloured Air unit. Maybe with all the Air Max love in the air lately we’ll see the influential ’93 hit shelves again. 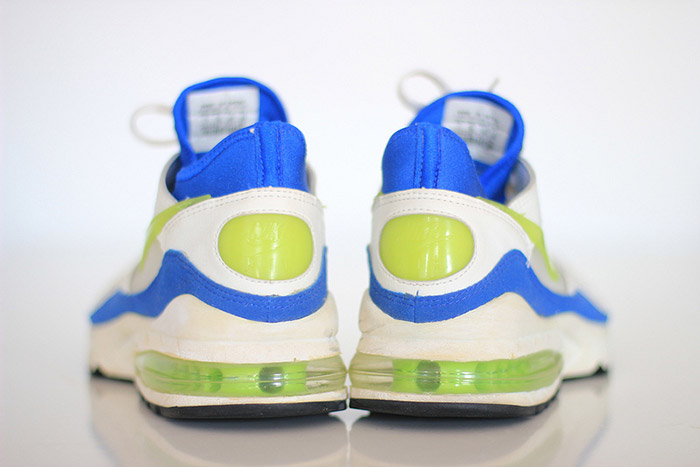 Following smoothly on from the Air Max ’93 is the Air Max ’94. It shares a lot of similarities to its older brother with Nike continuing to use that same sole unit from the ’93 that also featured on the Burst of the same year as these. However, this model seems like a strange step backwards for Nike, moving away from the techy appeal of the sock design present in Air Max at the time and stepping back towards traditional tongues; a decision that lingered for a long time. There’s even less lace holes than previous Air Max models. There’s something wonderfully simplistic about the Air Max ’94s design; it’s a strangely calm combination of jagged and smooth lines. This sneaker has become a definite under-the-rader job, probably due to its lack of prowess in a time where each shoe was fighting for attention. 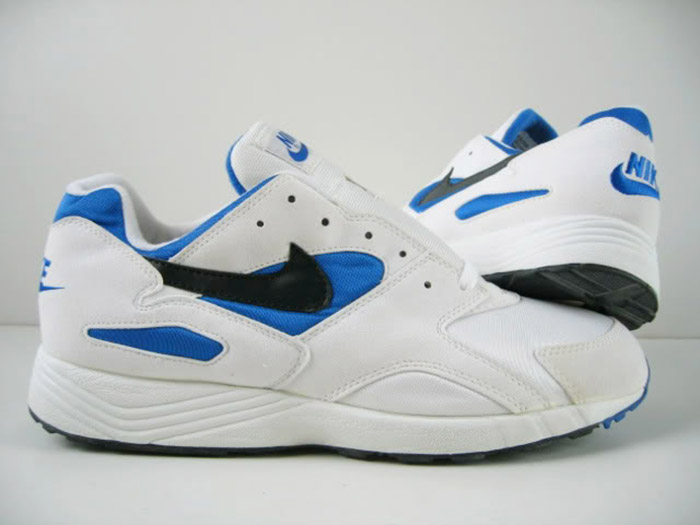 Believe it or not, not every running shoe Nike put out in the ’90s was Air Max, or even Air for that matter. It’s almost unnatural to see a Nike running shoe that’s not from the early ’80s that doesn’t say AIR on it somewhere, but the Pantheon is one of those oddballs. Released in 1994 this shoe took a lot of design direction from it’s better known Huarache and Air Max siblings of the time, but kept things oh-so-simple on the sole unit. It’s refreshingly nice to be honest. The oversized Nike branding on the heel makes this shoe a real gem and sits it very high on our wish list for reissues. The Pantheon did see a Lunar hybrid reissue in 2011 and 2012, but it managed to strip away everything that was great about this shoe and leave a pretty uninspiring piece of footwear behind that had little to do with his beauty, other than sharing it’s rad name, so we’re not counting it. We’ve already creamed over the Skylon once in this list, but this updated Triax version from 1995 had to be included. In the heat of Air Max, the Air Skylon Triax was meant to be a simple lightweight shoe for people who just wanted to run, weighing in at 300 grams. Unfortunately the Skylon branding seen on the Triax hasn’t really lived on, which is a shame because its spacey look (reminiscent of the Huarache branding) is an appealing one. When it came to colourways, this shoe was as clean as it gets, being predominantly White with splashes of bold colour or Black in just the right places. Now, everyone knows the Air Max 1, or should I say the Air Max ’87. The originator of Air Max. However in 1997 Nike got down with the Reebok Classics crowd and made the Air Max Leather CS, nicknamed the “Jewel” thanks to it’s defining feature in the shape of a gel mini Swoosh on the side. Certain models also featured a beautiful speckled gum sole that encased a giant Swoosh, just incase the gel mini Swoosh was too subtle. Often coming in all White leather, this model also took direction from the OG Air Max 1, covering the toe cap in a deep Obsidian leather and other similar colours. The Air Max 1 silhouette has never looked as good in leather as this. For our final sneaker, we reach our hands once again into the Air Skylon line and pull for the Air Skylon Triax, but this time around we’re revisiting 1997 where the shoe has moved on from its simple predecessor into a much more techy number. The Air Skylon Triax ’97 seems to land somewhere between an Air Max 95 and Air Zoom Spiridon, with about as much branding as Nike could squeeze on it before someone had a word. The addition of a SKYLON branded tab on the tongue is one of the many highlights to this strongly missed classic, along with some epic colouways. The likelihood of this sneaker making a return any time soon isn’t too likely, but we can hope none the less.