Warning: "continue" targeting switch is equivalent to "break". Did you mean to use "continue 2"? in /nfs/c08/h04/mnt/122689/domains/thedailystreet.co.uk/html/wp-content/plugins/wp-author-box-pro/includes/ReduxFramework/ReduxCore/extensions/customizer/extension_customizer.php on line 442
 Spotlight: Scene x Dickies 'Sacred Traditions' Project 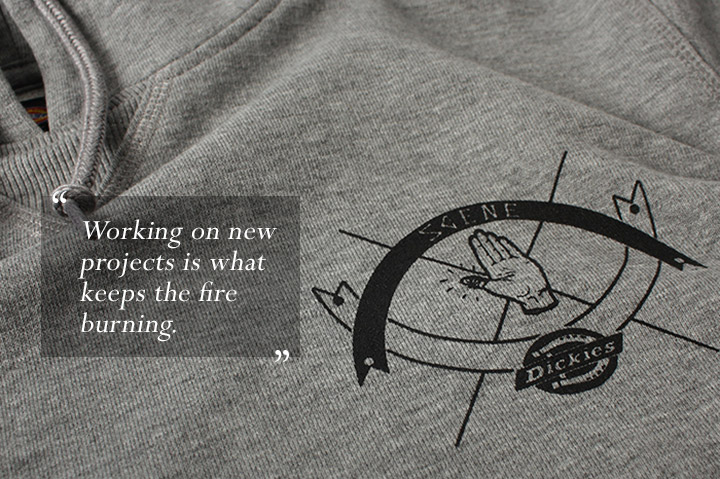 Preston’s Scene will shortly release a collaborative project with workwear giants Dickies, themed around the sacred art of gripping a skateboard. While Dickies origins are in overalls and other durable clothes for physical work, their hard wearing attributes make them equally relevant to skateboarding and a key element of Scene’s 16 year history.

The collaboration includes two colours in Dickies Philadelphia pullover hood, printed with co-branded illustrations on front and back and the red Dickies tab at the hem. Each comes packaged inside a printed tote bag featuring the same artwork, along with an iPhone case and a selection of stickers.

We took some time to speak to Scene’s owner Davo and Dickies’ man in the UK Carl Burnham about what the project means for them and also got a few answers from Teaone, the artist behind the unique illustrations … 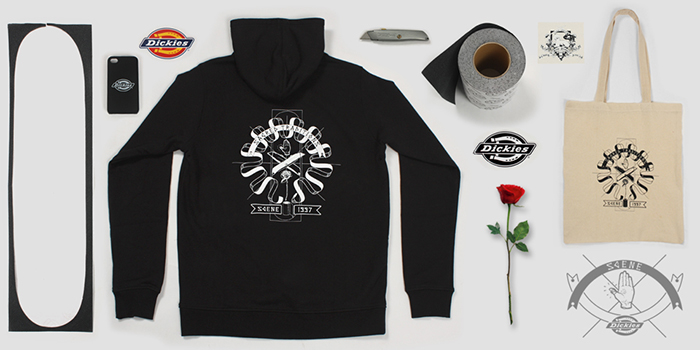 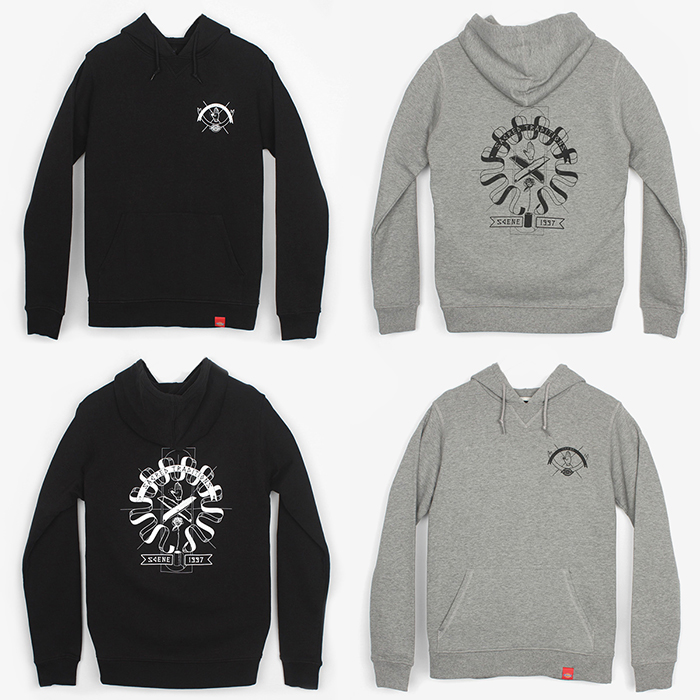 Who made the decision to work with Dickies and who was responsible for the idea behind it all?

Davo/Scene: We kicked off the idea by approaching Dickies. We wanted to do something special with one of our long standing brands. Workwear and skateboarding seem to go hand in hand, or at least that is how it feels to us, growing up and seeing the generation before all wearing Dickies work pants to skate in. This is before skate companies made skate specific trousers. Skaters like Frosty and all the Liverpool crew have been rocking them since day one.

What’s included in the collaboration pack?

Davo/Scene: We wanted to give people that little something special as it’s limited to just 50 pieces. Each garment comes in its own Sacred Traditions tote bag along with a Dickies iPhone case and a selection of stickers.

What else is coming up for the store this year?

Davo/Scene: Scene is proud to be celebrating 16 years of skateboarding this year. Working on new projects is what keeps the fire burning and the store moving forward. 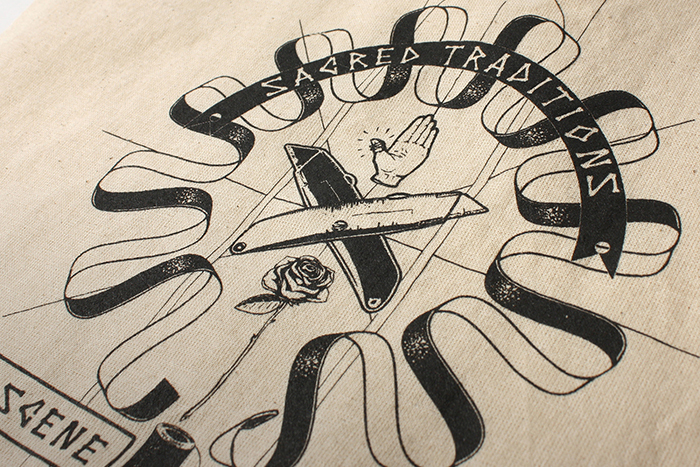 What is your relationship with Scene and how did this particular partnership come about?

Teaone: When you move to a new town, the first people to become your new family are skateboarders, that’s just the way it is. You interact with like-minded individuals and forge friendships that are built on strong foundations, so it is inevitable that you become a part of that family. That was over 15 years ago. Scene is like my immediate family in Preston.

Talk us through the ‘ritualistic’ artwork.

Teaone: The idea for the hood came about through bouncing ideas around with Davo. We both always wanted to do something about gripping boards and how many boards we have gripped in our lives, too many to remember, and also that everyone has a different routine for gripping, all equally valid, but the reasons behind the methods are both logical and totally illogical. I suppose after many years you hear so many odd stories around grip jobs, painted edges, breaks in the grip, different brands of grip, foot position, blade towards you/blade away, sticker jobs…The list goes on and on. When the opportunity came up to do something with Dickies we knew that this aspect of skateboard culture tied in nicely with what Dickies is about, the ethos behind workwear and having the necessary skills and tools for the job. I know there are only a select few people that I would allow to grip my board – if any at all -and I imagine this goes for many skaters out there, it’s a sacred thing. You don’t mess with it!

Have you worked on other projects with Scene prior to this one?

Teaone: Yes, many projects. Lots of board graphics too and hopefully many more. 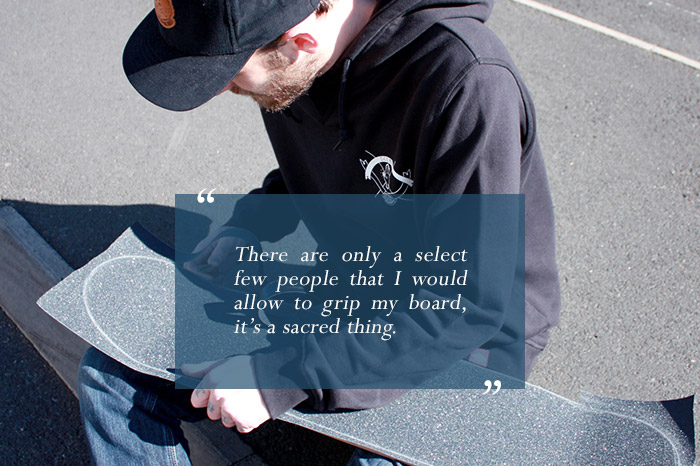 Tell us about your relationship with Scene and the reasons for this collaboration?

Carl: Scene have been a long standing Dickies customer and we’ve been dealing with Davo since he first started Scene as an ambitious 17 year old, so we’ve seen the store develop from its camouflage walled humbled beginnings to what it is now.

What can you tell us about the hoody itself? Is it a new piece or a Dickies staple?

Carl: The basic Philadelphia hoody has been in the Dickies collection for a long time now, a core classic that Dickies are synonymous for.

How important is it for the brand to collaborate with retailers, particularly those in the UK?

Carl: It’s important to show our support at a grass roots level. 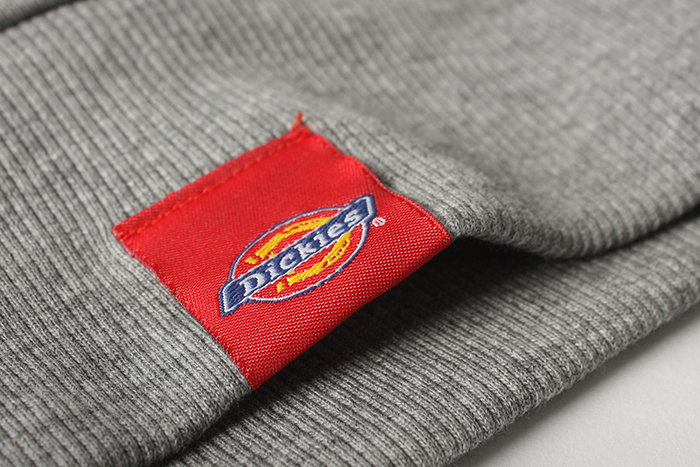 I really love the story behind the collaboration and the way it’s been realised in Teaone’s illustrations. Gripping is a small job, often overlooked by many, but with so much importance. Scene and Dickies have chosen a really unique subject matter and the project is all the better for it.

The collection will go on sale from this Saturday, April 27th, at 10am, exclusively at Scene. Each colour in the hood is limited to only 50 pieces.

Thanks to Davo, Carl and Teaone for their time.

The Hideout for Dickies AW10 Collection