Warning: "continue" targeting switch is equivalent to "break". Did you mean to use "continue 2"? in /nfs/c08/h04/mnt/122689/domains/thedailystreet.co.uk/html/wp-content/plugins/wp-author-box-pro/includes/ReduxFramework/ReduxCore/extensions/customizer/extension_customizer.php on line 442
 140 Today: The Levi's 501

Today, Levi’s celebrate the 140 anniversary of the iconic 501 jean. Take a look at a short video about the rich history of the 501 and some shots from the Levi’s Vintage Archive while it was in town with Levi’s Company Historian Lynn Downey.

The 501 is about as iconic as items of clothing can get. It’s seen itself through 140 years in the denim game and has somehow remained relevant throughout. A more than impressive feat for a brand, let alone a single product. Having reinvented itself time and time again, the history of the 501 is almost as rich as the history of denim jeans itself. Summing up 140 years in a short video is also no easy task, but someone has done a cracking job of squeezing it all into just under 3 minutes.

In celebration of this landmark achievement, Levi’s invited a select few people who are geeky enough about denim (ourselves included) to a private talk by Levi’s Company Historian Lynn Downey at the Levi’s head quarters in London. On display were some of the oldest jeans in the world, having made their way over to the UK from the Levi’s archive in San Francisco for the first time ever.

Denim history is a rich and seemingly never ending topic that intertwines with culture and society on so many levels, so to hear Lynn talk about the Levi’s archive that she so passionately manages was more than a treat. In all honesty, we could have staid their days and I’m sure Lynn would have been happy to continue discussing denim, the 501 and all the little stories that time has provided forever, but alas that could not be the case. Such stories included a letter dated 1954 from a British man explaining that while training in the United States during World War II he purchased a pair of Levi’s jeans, but now that they have worn out he can’t seem to find any in England. A scenario that is nearly impossible to picture these days. Another story is spoken in the form of a pair of washed out 501 jeans that have been signed by Mick Jagger. Another pair that are tattered beyond belief we are told were discovered in a mine shaft in America, presumably after a worker decided that they were past their best and ditched them there having put on a new pair, or perhaps the tale is more grim. We will never know.

140 years is a long time, long enough for a lot of history to happen, but it’s especially rich when that history is attached to one of if not the most influential development in clothing ever. The creation of jeans and their cultural shift from copper riveted waist overalls (the original description for Levi Strauss and Jacob Davis’ patent product of 1873) to a socially acceptable every day garment is one of great importance that is still developing infront of our eyes today. You only have to speak to your grandparents about denim to see how the public perception of jeans has changed from that generation, who still regard them as workwear.

I could ramble on for days about denim and it’s fascinating past, present and future … so I shall stop here and conclude by wishing the 501 a very happy 140th birthday and thanking Lynn for her insight and time. 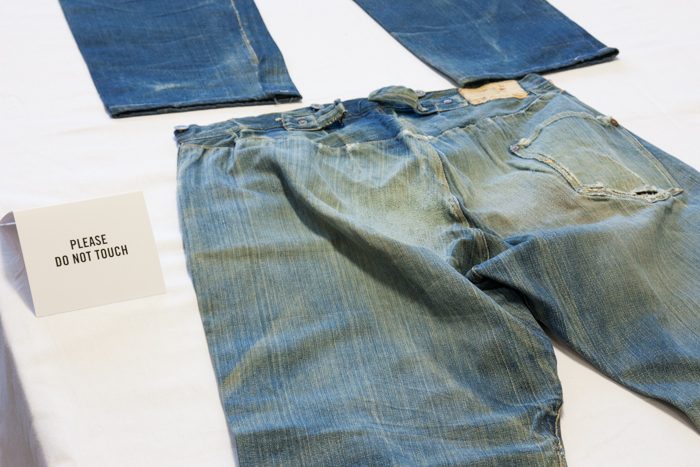