Warning: "continue" targeting switch is equivalent to "break". Did you mean to use "continue 2"? in /nfs/c08/h04/mnt/122689/domains/thedailystreet.co.uk/html/wp-content/plugins/wp-author-box-pro/includes/ReduxFramework/ReduxCore/extensions/customizer/extension_customizer.php on line 442
 Dark Nature Clothing Announces It's For Sale 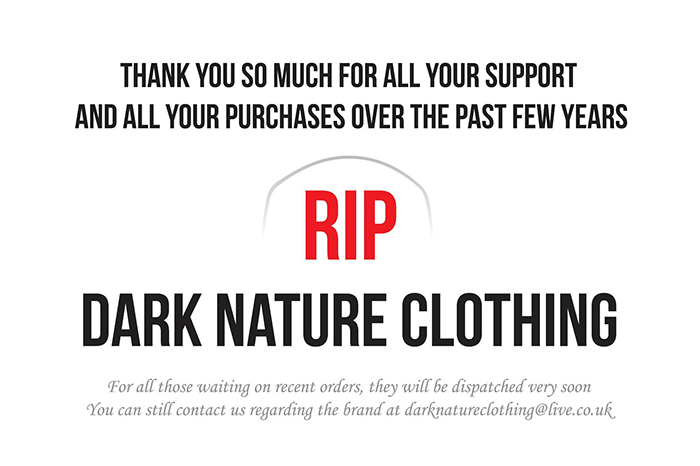 Dark Nature Clothing has always been a hot topic for discussion on The Daily Street; a quick look back through previous posts will tell you that their collections were often heavily debated. The brand amassed a considerable following in a short amount of time, and continued to build on this with each release, but along with that army of followers came a large number of detractors.

At the end of last month, just a short while after releasing their Spring collection, the brand announced that it would cease operations, effective immediately. With some items still available for pre-order, and a summer collection on the cards, it seemed like a snap decision and little further explanation was given as to the reasoning behind it all.

Just yesterday, the brand announced on facebook that it was ‘for sale’, with the following note. 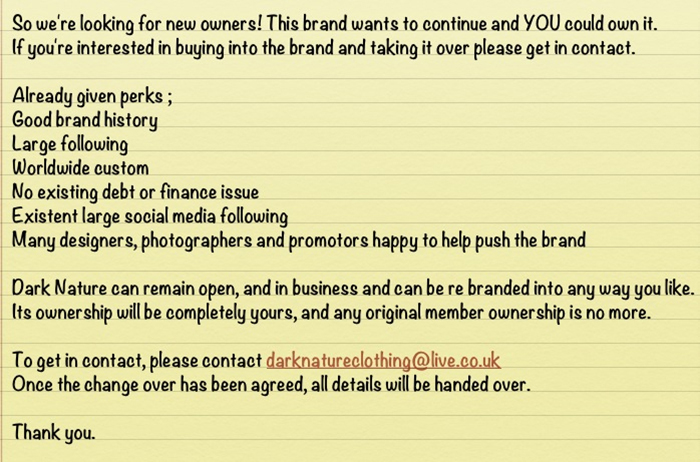 This is a hugely interesting move for the brand, and one that I assume will spark just as much discussion as their previous collections have. Many are likely to write it off as a foolish and unnecessary act, but if you break down the facts, it might not be that bad a deal.

In its (roughly) two year history, Dark Nature released numerous mini-collections, peppered with a few special projects, most of which sold quickly, never to be re-produced. Their collections sold via their webstore to customers worldwide, and the brand amassed a strong following on facebook, tumblr and Instagram during that time. Buying into this could be a great foundation for any young designer looking to kick off their first collection. Think about it, plenty of streetwear brands are no longer run by their founders…Dave Ortiz is no longer at the helm of DQM, Sean Stussy left the brand behind long ago, and further afield, most fashion houses have many designers and creative directors pass through their doors in their lifetime – so why should ‘UK streetwear’ be any different?

“I still wear the stuff, I still send people to the store. I just moved on. I kind of changed gears. I just decided to go left and those guys went right and we’re both cordial and nice and we see each other every now and again but I want to do things my way now” – Dave Ortiz on DQM via Sneaker Freaker

The question though is – “Is it REALLY worth it?”, would a new brand be better off starting from scratch like every other and building their foundations from the ground up? As I mentioned earlier, although Dark Nature came with a substantial following, the brand were often criticised for quality issues, a lack of original design and for simply cashing in on ‘hype’ – is that really a stigma that can be overcome? I would argue as well that announcing that the brand was for sale nearly two weeks after publicly announcing its demise is also a difficult move, and that if the brand wanted this suggestion to be taken seriously, it should have been made behind closed doors before ‘killing’ the brand off in front of its audience and allowing that death to settle in.

Regardless of the brand’s reasons for shutting down, and whether or not there is value in it from here on out, this is a very interesting move, and perhaps something we’ll see a lot more of in the future. Young British designers are putting huge amounts of time into promotion of their brands and building large numbers of fans on a global scale in doing so – that’s got to be worth something.

For now you can stay up to date with developments on the brand’s facebook page, and register your interest in owning Dark Nature by email.