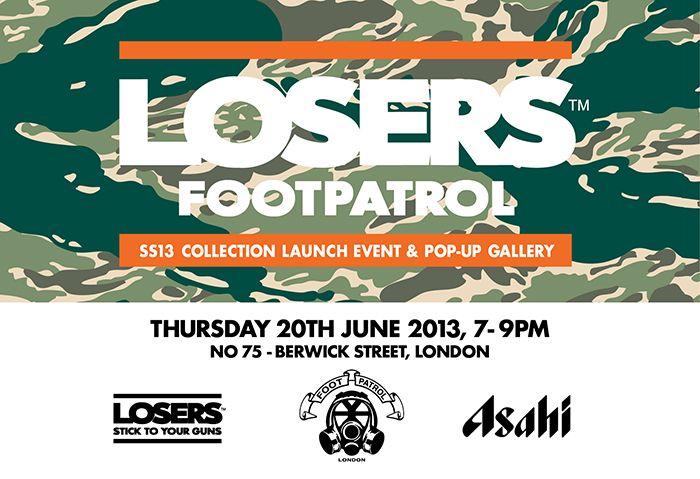 Japanese sneaker brand LOSERS are launching their SS13 collection next week in association with London’s Footpatrol.

This season, LOSERS head designer SNEAKERWOLF has focused on bold prints and vivid patterns, something that’s very popular at the moment, bringing added texture to the brand’s classic looking silhouettes. To keep things interesting on the events side, Footpatrol have decided to open a pop-up space on Berwick Street, giving the collection it’s own space and moving out of the store for the first time since its re-opening back in 2010. Alongside the Spring/Summer 2013 collection will be a selection of “Kanjiography” pieces by SNEAKERWOLF and word on the street is that he’ll be attending the launch event in person with his brushes in hand. Who knows what could happen! Drinks will be provided by the folks at Asahi.

Be decisive on this one though, as the pop-up space will only be open on Friday 21st and Saturday 22nd (not including the launch event on Thursday evening).

Footpatrol: The return of a legend