Warning: "continue" targeting switch is equivalent to "break". Did you mean to use "continue 2"? in /nfs/c08/h04/mnt/122689/domains/thedailystreet.co.uk/html/wp-content/plugins/wp-author-box-pro/includes/ReduxFramework/ReduxCore/extensions/customizer/extension_customizer.php on line 442
 T-Shirt Party announces "No More Cheap Tees" and TSP105: HISTORY

T-Shirt Party once again announce the end of an era with the close of their second series and an announcement that they will no longer be printing cheap tees.

Back in March 2011 T-Shirt Party announced the end of it’s first series and therefore the end of the project, much to a lot of people’s sadness. February 2012 saw the project brought back to life with a second series announced, the same series that has now reached a close. With the end of this series T-Shirt Party are looking to the future with an eye to up the quality of the project and continue to develop what has become a brand name with huge potential. Here’s the official statement:

“2 series’ of cheap heat pressed white tees is over. 105 tee releases, a bunch of videos, numerous special projects and a long list of great contributors and collaborators. It’s been fun as it is but we’re moving on and changing how TSP functions. All t-shirts from the archive are going to be available for a limited time before we sell the equipment used to make them. TSP is not over. It will continue but in a different way to how its operated up until now. It’s a new beginning rather than an ending.”

TSP fans will be happy to hear that the end of series 2 isn’t the end of TSP. There’s also a contingent who will be happy to hear that TSP will no longer be using the cheap heat press process to create their t-shirts; something that didn’t sit well with some fans but was unquestionably a large part of the aesthetic and charm of T-Shirt Party. An issue that was addressed by the anonymous Stan Still, owner of T-Shirt Party in the comments of this post.

To mark the end of an era (again), TSP have created a retrospective short film titled ‘Yung Hearts’ (shown above) that features the t-shirts showcased on people for the first time in the brand’s history. They have also released one final t-shirt titled ‘HISTORY’ – another landmark for the brand as it’s printed on a black tee, not white. Think what you will of T-Shirt Party, but it’s definitely one of the most intriguing brands in the UK with one of the most interesting stories and we look forward to seeing how the brand continue to push themselves in the future.

You can pick up the HISTORY t-shirt along with the other series 2 t-shirts at T-Shirt Party for a short time longer. 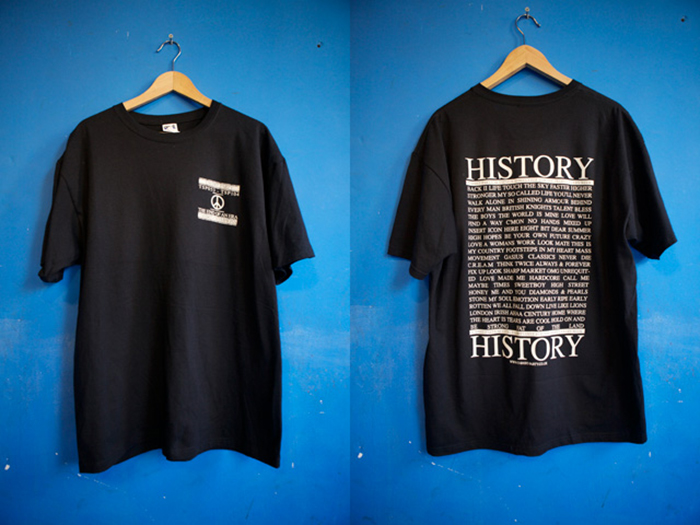