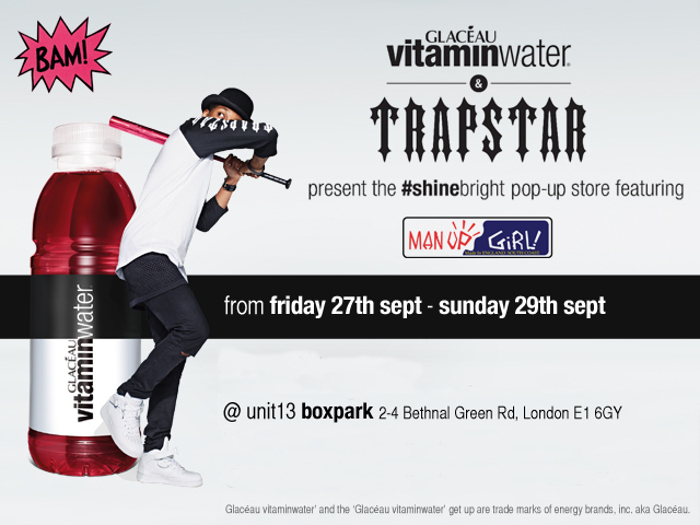 Following the launch of their #shinebright campaign earlier this year, vitaminwater now bring their experience with London’s Trapstar to a close, presenting a pop-up store featuring young brand Man Up Girl, winner of the #shinebright competition.

Trapstar frontman Mikey, who was one of six creative leaders who featured in vitaminwater’s #shinebright campaign, has selected South Coast brand Man Up Girl as the winner of the competition, providing his insight into the industry as a successful brand leader and ultimately the opportunity for Man Up Girl to sit alongside Trapstar in the new pop-up store. The two have also produced a short showreel to showcase the collection, which you can watch below.

Man Up Girl is a female focused brand that takes influence from the styles and colour palettes of the 90s, mixing brightly coloured sportswear, allover print twin-sets and a selection of more feminine items. Their collection include t-shirts, sweatshirts and tech outerwear, along with skirts, tops and dresses.

The vitaminwater and Trapstar pop-up store opens at Boxpark this Friday and will be remain there for the whole weekend. A launch event is to be held this Thursday evening from 6pm, with music provided by Piff Gang’s DJ Motive. Congratulations to Man Up Girl on taking the winning spot.

Trapstar Invasion at The Candy Store