Warning: "continue" targeting switch is equivalent to "break". Did you mean to use "continue 2"? in /nfs/c08/h04/mnt/122689/domains/thedailystreet.co.uk/html/wp-content/plugins/wp-author-box-pro/includes/ReduxFramework/ReduxCore/extensions/customizer/extension_customizer.php on line 442
 Preview: Reebok Classic Leather x Gary Warnett 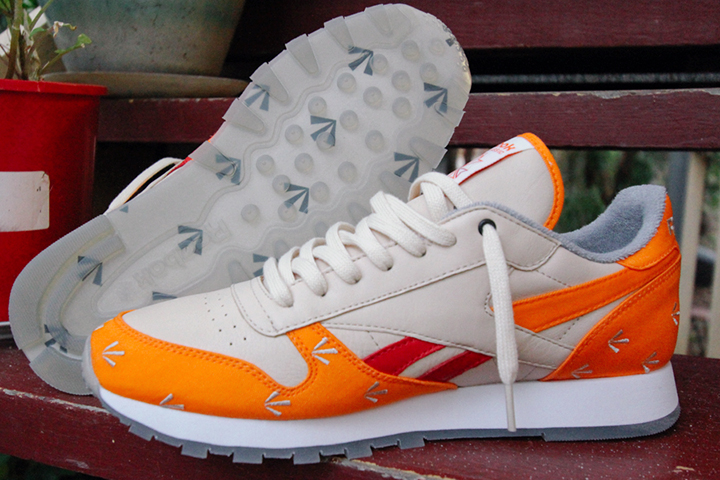 Reebok Classics really are doing things right at the moment, and here we see them enlist Gary Warnett of Crooked Tongues fame for his first ever solo collaboration, taking inspiration from criminal incarceration.

Those who have had the pleasure of speaking to Gary will know that he isn’t afraid to share his opinions on the topic of footwear and the industry that creates it and that his knowledge is seemingly never-ending. There’s a few real heads of sneaker culture (as much as Gary would hate me calling it that) who are more shy to the public eye and Gary is one of them, so it’s a really interesting occurrence that Reebok have asked him to do a collab as himself rather than CT and that he has actually accepted. To set the tone, here’s a quote from Gary about this project and collaborations in general …

Shoe collaborations are played out. They seemed amazing in 2003 but now they’re just brands going through the motions. They veered to the middle of the road. Most people have no connection — emotional or cultural — to the shoe that they’re reworking. There’s still some standouts, but the majority of collaborations should have stayed as unanswered emails.

Let’s be very clear on something – this shoe has no nickname. Not because it couldn’t have one, but because Gary thinks the idea has become naff and I would have to agree. Essentially, nicknames for footwear has come around for the ease of distinguishing amongst collaborative projects from partners that work together so often that they may as well be a sub-brand. For example, Ronnie Fieg and his never ending renditions of the Asics Gel Lyte III. As good as they are, and they are, they are nicknamed so that you know what one you’re talking about amongst the treasure trough of previous collaborations and so that you know that there was a reason and a story behind the shoe other than the fact that they sell out in a few hours. The more you learn about this particular shoe, the more similar it becomes to one of Gary’s long rambling blog posts where he calls out the sneaker industry for it’s more ugly habits and attempts to set them right with references from the past and hopes for the future. To me, that’s what this shoe embodies. You can tell that part of the fun for this collaboration for Gary was simply the idea of getting a brand to OK a shoe that was inspired by a lot of things brands try to steer very clear from being associated with, to release a shoe that was a little bit taboo but not enough that it would get banned …

The big elephant in the room when we talk about influence is the criminal population’s role in selling product … The Reebok Classic had one of the footprints most commonly found at crime scenes, so why not go crazy with that idea? I took the elephant in the room, shot it in the head and took the ivory for display.

As referenced by Gary, the Reebok Classic Leather was in fact the most popular choice of trainers among burglars in 2010. Talking of references, this shoe is riddled with them, wether it’s the broad arrows taken from the prison overalls of the 1870s, the Ralph Lauren inspired embroidered pattern, the orange canvas from American prison jumpsuits, the borstal dot eyelet, the ice sole from some of Gary’s favourite JD and First Sport editions or the tan leather that Gary’s dad used to bust on his Classics. Clearly, not all of these are prison or borstal references, but the majority are and the rest are personal to Gary. It’s well worth heading over to Gary’s Gwarizm blog to read about every drop of inspiration that has been brought to this shoe with the care of a true perfectionist.

Thanks to Project 4000 for the images. 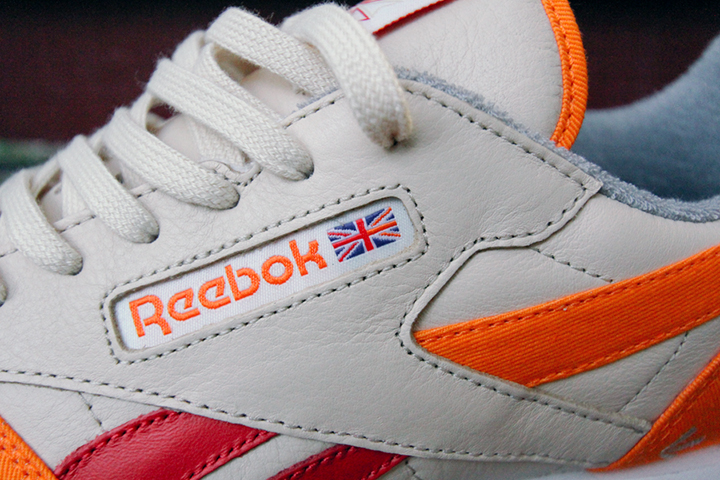 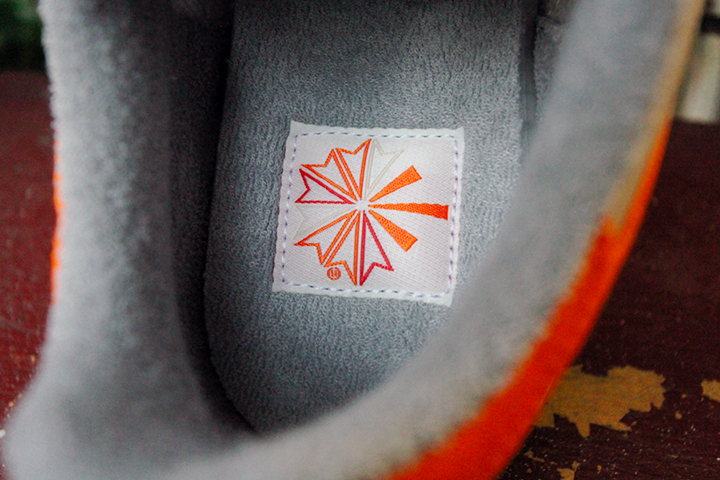 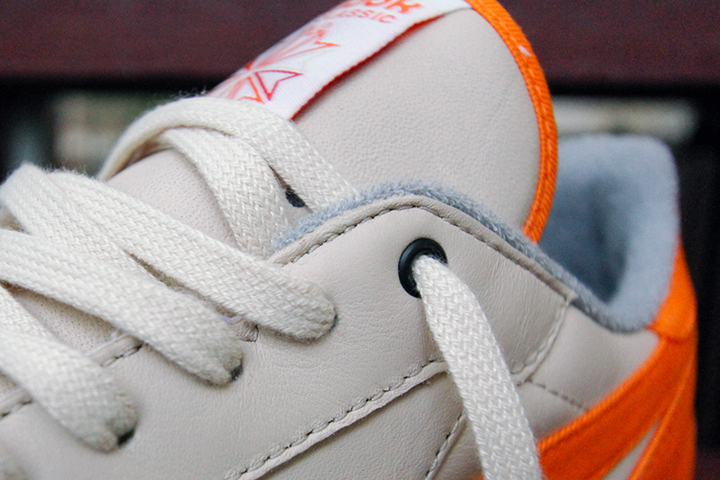 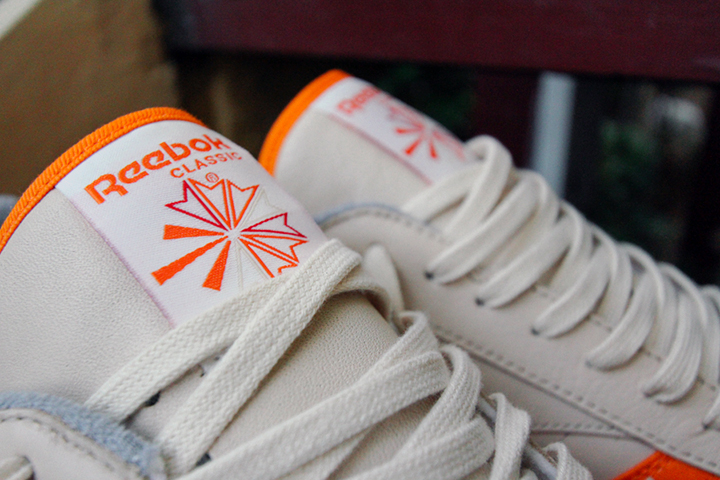 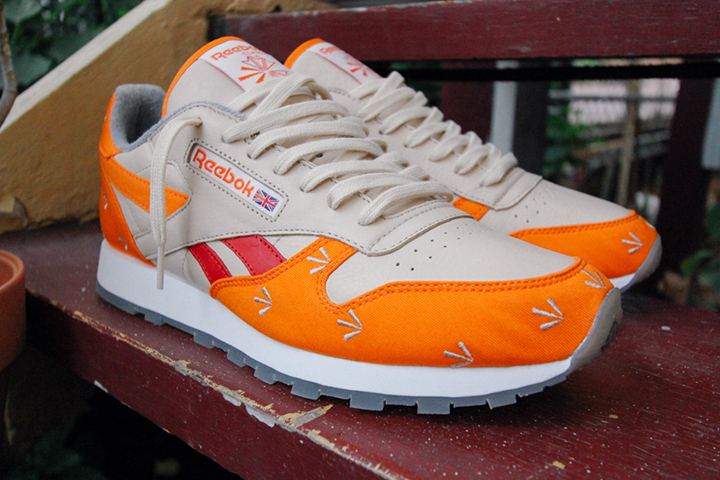