Warning: "continue" targeting switch is equivalent to "break". Did you mean to use "continue 2"? in /nfs/c08/h04/mnt/122689/domains/thedailystreet.co.uk/html/wp-content/plugins/wp-author-box-pro/includes/ReduxFramework/ReduxCore/extensions/customizer/extension_customizer.php on line 442
 Complex Simplicity: Eric Avar talks about designing the Kobe 9 Elite Nike Basketball will always be one of the most innovative sectors within performance footwear. Summer means training camp for athletes in the NBA and it also means a new season on the horizon. More importantly it means new shoe designs are set to be announced and previewed. The designers who are responsible for these new creations can pride themselves on being at the forefront of innovation, always showcasing and pushing the current abilities of performance footwear technology. Nike have been responsible for some of the most iconic basketball shoe designs ever, with performance releases leaking into lifestyle and fashion sub-cultures effortlessly.

Nike’s Vice President of Design Innovation, Eric Avar, knows a thing or two about design and innovation. Avar began his career at Nike under the wing of Tinker Hatfield and within the ACG sector, before moving onto basketball and working on projects such as Nike Free and Lunar. Amongst Avar’s great body of work is the ongoing collaboration with Kobe Bryant for Bryant’s signature shoe line with Nike. It’s a project that has pushed the boundaries and potential of the basketball shoe as we know it. The Kobe 9 Elite is another example of Avar’s innovative and progressive vision where we see the workings of Flyknit, Flywire and Lunarlon combined. It’s a blending of technologies that we haven’t seen applied to a basketball shoe before and Nike have once again ripped up the blueprint of what a basketball shoe should be and rewrote the script.

Enthusiastic about these new developments and the Kobe line, we had the chance to speak with Eric and get to the crux of the Kobe 9 Elite. We go over shoe technology, working with Kobe, design inspiration and the future of basketball shoes. Amongst the bombardment of retros and reissues there’s so much more going on in the world of Nike. Classic designs will always be favoured but there’s an abundance of new designs that are worth your time. Eric Avar is at the forefront of a new age of footwear and is pushing the envelope; something that we really admire here at TDS. Blending art and science successfully is a tough pursuit, but one that Nike and its team of designers are achieving with each new release. We can’t wait to see more … With the Kobe 9 Elite, there’s a lot of focus on the technology utilised to construct the shoe. A fascinating aspect of the design is the combination of the technologies and how they all work together to provide a complete support system. Did you face any difficulties combining the three core technologies and getting the right balance for Kobe?

Yeah, you know every project we work on has its challenges. This one was definitely the most challenging Kobe shoe project to date. I think Kobe had very high expectations, which is great. Then there was working with the Flyknit technology which I’ve been working with for quite some time now, and we’ve developed a number of running shoes which have been brought to market. But probably the biggest challenge with the Kobe 9 was really using the Flyknit technology in way that was appropriate for the game of basketball and the extreme lateral moves and forces associated with not just a basketball shoe, but at the level of someone like Kobe.

His style of play combines so many different elements of the game like strength, speed and flexibility and it seems like the three core technologies really represent those main elements.

Yeah, I would agree. That’s what we’ve tried and that was certainly the intent. It was really a combination of all of those. It’s finding the perfect balance between natural motion and a responsive lightweight product. Something that will have a fit, security and perceptive feel. A lot of tension goes to the Flyknit and that’s certainly one of the main components, but it’s certainly a sum of the parts is what really makes up the overall performance of the product.

Another noticeable quality of the shoe is the switch to a higher cut design again, instead of the low cut on the previous models. What was the reason behind that change?

It was a very conscious decision. It was one of the first things that we spoke about and one of the first insights that Kobe brought to us when we first started talking about the Elite 9, which was 2 to 2 and a half years ago. One of his original insights was that he wanted a low top, which we had already established, and he came to us saying “I want the low top, but I want to create a high top that plays fundamentally like a low top”. The Kobe 7 System was the first time we had done the drop in midsole. We had the perceptive neoprene collar around it, which he really liked the feel of. He felt like it didn’t hit his range in motion, but it gave him a little more perceptive awareness of where his ankle, his foot, ultimately his body, is in space. He built upon that and was like “Can we just fundamentally create a high-top that would have those same properties?”, so that was the performance insight and then Kobe being Kobe, he just likes to push the limits of design and he likes to be provocative. We had done 4 or 5 low top shoes and he wanted to be provocative and come back with a different proposition.

How does the collaboration process with Kobe usually begin? Does it start directly with him, or is it a more mutual and relaxed affair?

It’s very mutual. It is relaxed, you know. I would love to spend even more time than I do with Kobe. We meet on a regular basis and any time we sit down, just about any place or any time, the conversation just immediately goes to what we’re working on. What he’s thinking, what he’s feeling and it may be in regards to the next shoe or the shoe that he’s wearing currently. It may even be on the shoe we’re working on or it could be 3 or 5 shoes in the future. The conversation is just always ongoing in terms of the potential of what we could do, so it’s very natural and relaxed. We’ve established that type of conversation and relationship through the years. 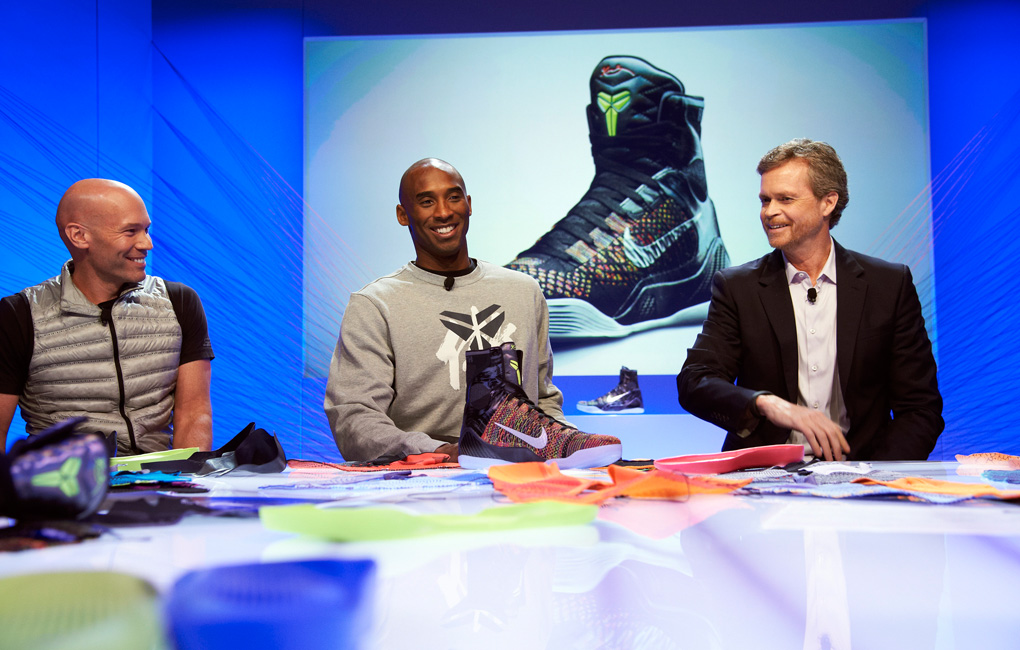 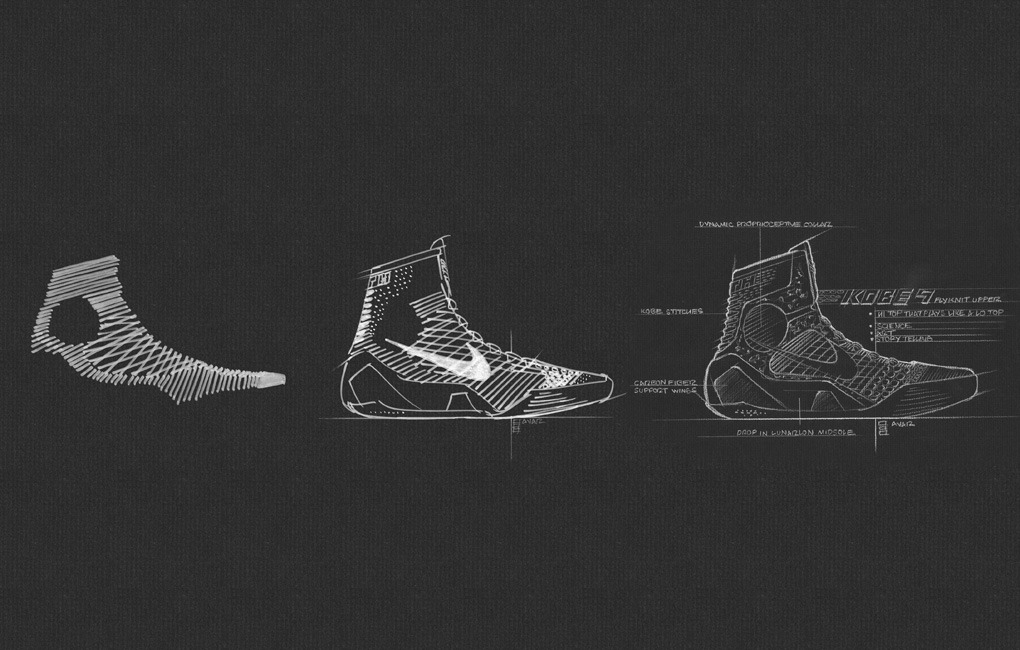 When you’re not pressured by the design requirements on the performance side, do you have a vision and an idea of what you want to achieve with the aesthetics? Is there something you like to push the boundaries of?

I’m always partial to how you can create a greater level of simplicity. One of the terms we talk about quite often here is a ‘complex simplicity’. So it’s not just simple for simple’s sake. There’s a lot of thought, a lot of depth to that simplicity. That’s fundamentally a design philosophy of mine and Nike. When I look to the future we have these emerging technologies, like Flyknit, that allow us to open greater versatility and more of a finite, almost to the pixel, level of ability to engineer performance attributes. I think the products in the future will be in essence more simple, but there will be more depth and complexity behind them from a performance and also from an inspirational standpoint.

As a designer you have to keep aware of the developments within technology, culture and arts. What shapes and guides your design process?

I think just in general being a designer, a creative or an artist, anyone in that realm, you’re just always open to what you may see, hear or feel. Fundamentally it’s just being a sponge and being open to anything you may see in that realm. More specifically, as we mentioned, technology is evolving so fast and you try to keep abreast of the potentials, not just here today, but of what could be here tomorrow. I think as a designer fundamentally you have to anticipate where things may go.

I find a lot of inspiration just from nature and the natural systems. There’s just a simplicity and everything in nature has a purpose. As we have greater science that allows us to understand that at a more finite and molecular level. You’re learning more and more about some of those natural systems and why they exist, why they operate the way they do. I just think there’s a lot to learn from that and it certainly applies to the human body. Fundamentally, we are designing for the human body and there’s probably no more complex of a system than the human body.

And one of the main elements of the Flyknit technology is the ‘nature amplified’ design ethos. It aims to provide the foot with the most natural way of manoeuvring with the body…

Yes, and I think honestly we’ve just started scratching the surface of how we can engineer systems like that.

Where do you see basketball footwear going from here? It seems like there’s a lot to explore in the future.

Yeah, there’s so much more to explore. As we gain more and more information and a deeper understanding of some of the science behind performance, we’re learning more all the time and how we can apply some of those insights. On the technology side, technology and the way we produce and manufacture product of the future is changing. Ultimately I think it comes back to a sense of intuition, imagination and this notion of simplicity and complex simplicity. So it’s really a fusion of all those. I think that’s where and how product of the future is going to evolve.