Warning: "continue" targeting switch is equivalent to "break". Did you mean to use "continue 2"? in /nfs/c08/h04/mnt/122689/domains/thedailystreet.co.uk/html/wp-content/plugins/wp-author-box-pro/includes/ReduxFramework/ReduxCore/extensions/customizer/extension_customizer.php on line 442
 Interview: Stevie Gee on working with Nike SB 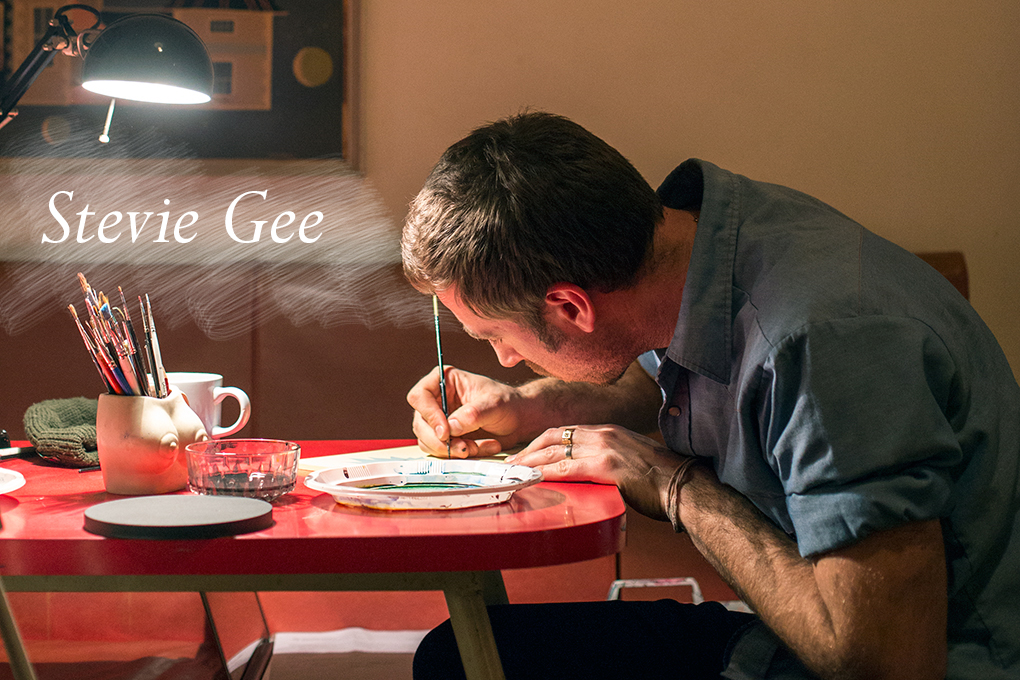 With Nike SB opening their first space in Size? on Carnaby Street this coming Monday (17th February), we sat down with the man they have commissioned to design bespoke artwork for the space, London artist and illustrator Stevie Gee.

The skate world has always been closely attached to and well known for its artists, be it graphic designers, illustrators, painters, film makers, or graffiti artists, it’s always been a hotbed for talent. Out of London’s skate culture comes Stevie Gee, maybe not directly from skate culture, but his roots definitely started there and he has come full circle to find himself working with Nike SB.

Taking on the challenge of decorating the space in a creative manor, Stevie has opted to cover the stairs leading upwards with an array of faces, some Nike SB pros, some fictional, all spouting words on the lead up to the centrepiece – a skate themed, fully functional Wheel of Fortune. It’s playful and tongue-in-cheek in a way you would expect from Stevie and his work.

We headed to North London to catch Stevie at the end of his work process building and painting the artwork in his studio to get an idea of how he approaches projects such as this, why he chose a Wheel of Fortune and to learn more about his self named “Red Cap Bowl Riders Club”… 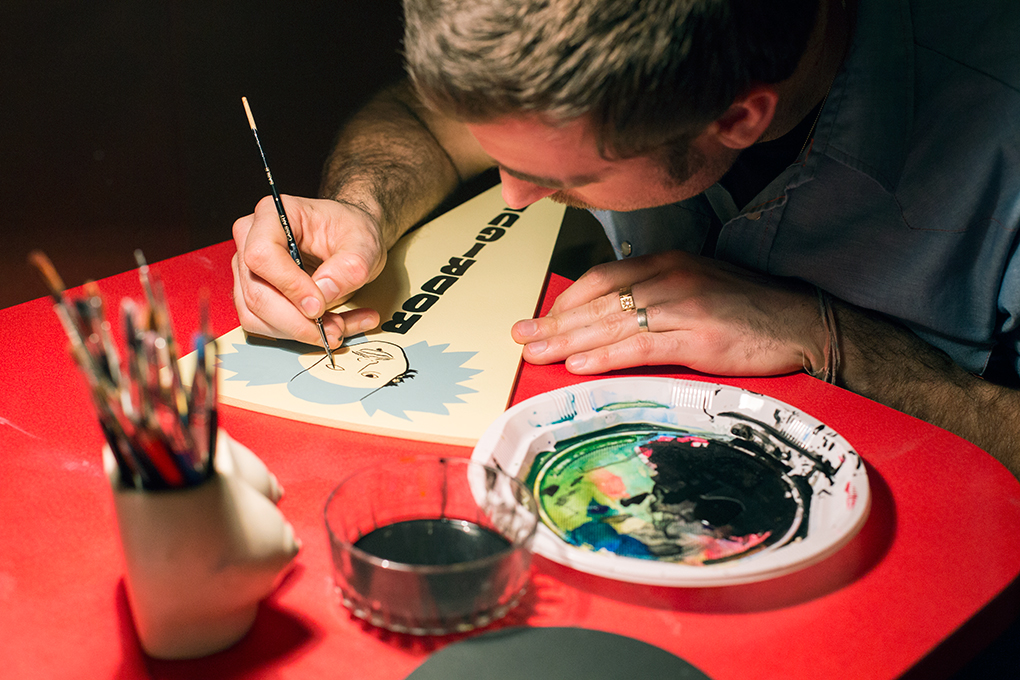 You’ve got a quite a recognisable style. When did you develop that style and where does it come from?

I think it’s an evolution really. I mean I’ve always been into comic books and the way of single frame stories, that always interested me, so a lot of the work I do will have an image with text with it. So that’s the kind of vibe I really like. Roy Lichtenstein for example does a single comic frame and you just see one image. I really enjoy that.

And the same with Raymond Pettibon, who he would be an influence on me having seen his record covers and so on. He’s very free with his brush, I’m a bit more tight with my brushes. But I do love to use brushes as opposed to pencil and that kind of stuff. But yeah, I guess when I was at art college I used to draw a lot of comics and fanzines and things like that and then as it went on I moved into more painterly techniques and using brushes.

Did you always want to be an illustrator since you were young?

There’s usually an air of humour to your work. Is that important to you?

Yeah definitely. I’m very much aware that what I’m doing isn’t that important in the long run; I’m not saving lives, I’m not a doctor or a soldier or anything like that. So I like to keep it light, not take it too seriously and just have fun with it. I think I enjoy it more when it’s fun. I never really thought about making ‘art’, I always wanted to do commercial work. I really wanted to do record covers or skateboard graphics. I wasn’t one of those people who came from street art or anything like that.

When I started developing a style I found it was easier for me to do things that I found funny and then when other people started finding that funny or enjoying it, I wouldn’t say people find my work funny, but yeah there’s humour to it, a lightness to it. It’s fun for me so hopefully other people like it. 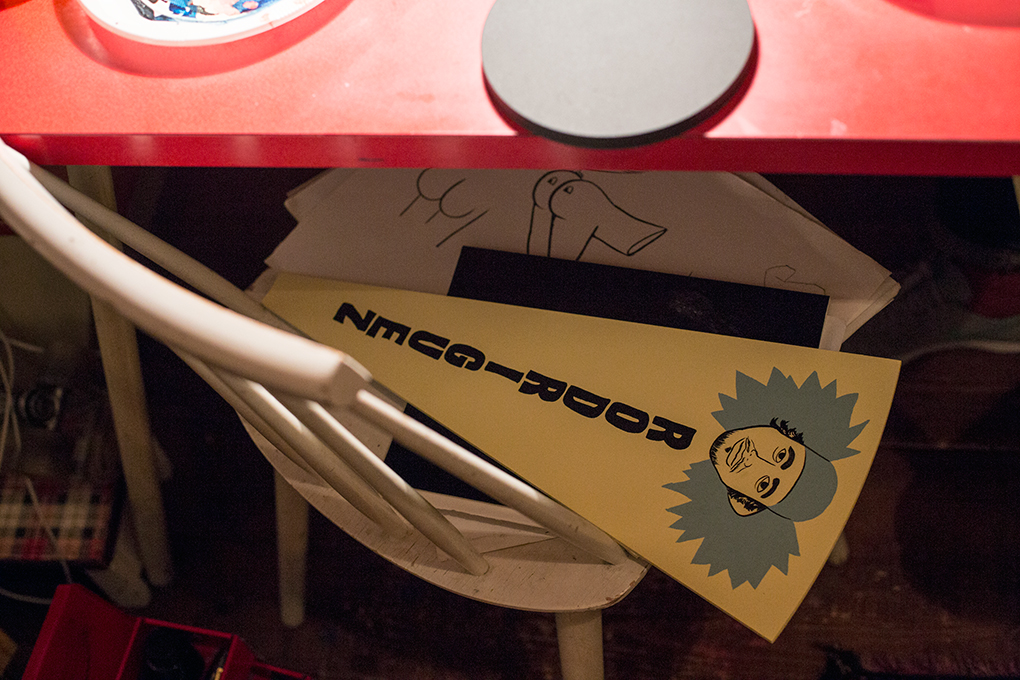 Do you have a background in skateboarding?

Yeah. When I was a teenager growing up it was the number 1 thing I did with my friends. It was all we ever did. There was no skate parks really around then, in our town at least. We’d have to train ride or go to Southbank on trains, so we’d build a lot of stuff ourselves, cutting things out of wood or we’d work in a warehouse over the Summer and get crates and palettes and build them.

Through the art and as a skate from young, do you ever get starstruck when working with some of the top skaters in the world?

For sure! Eric Koston for example on the Nike SB team, he was always just amazing. I loved his video parts. It’s amazing for me to see a lot of the same guys still around now and still just killing it and then all these young guys like Malto and Shane O’Neill. It’s just mind boggling what they do and how they stick their tricks, and so young. Just unreal talent. I would be star struck and embarrassed if I had to go and skate with those guys [laughs].

And do you still skate now?

Ummm yeah I try to sometimes. My friend and I started a little bowl riding club [laughs] for Saturday mornings. It was called the Red Cap Bowl Riders Club. But yeah, we’re just like dads who don’t skate that much anymore but have fun. I don’t session tricks because of injuries and so on, but I certainly enjoy it when I get to do it.

Although having done this film thing, I have actually planned this Summer to build a little quarter pipe and have it set up in the alley out there because now my son is 9 it’s something that I really want him to get into and he’s interested in skateboarding and he likes watching the videos with me and stuff. I mean, I started in my early teens and he’s 9… he could be the next Sean Malto. He even looks like Sean Malto actually, so yeah, you never know [laughs]. 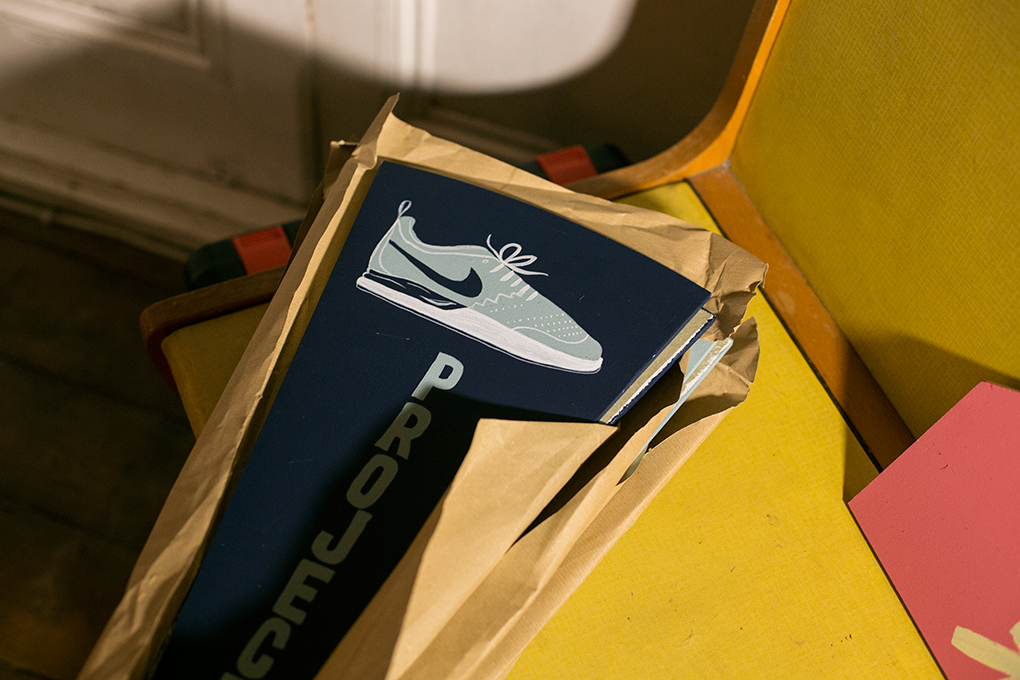 In a world where illustration is becoming more and more digital, you seen to be striving to keep things hands on. As an artist, do you feel it’s important to stay in touch with more traditional practices?

I think I find it more satisfying to produce one-off things, like all these heads and stuff I cut these out of wood myself. I’ll buy a sheet of wood, cut them all out, sand them down, prepare them. It’s a nice process and it’s a kind of immediate result and it’s a one-off that’s unique. So yeah, definitely I love the process of things that are more traditional. But I have to use digital as well for t-shirt graphics and whatever. You can’t submit paintings. It’s kind of a balance, getting a mix.

I love objects as well, like that old rifle [points to a hand painted wooden rifle leant against the wall] and whatever. I love painting unusual pieces, unusual objects, motorbike, helmets, whatever. It’s nice to have a physical object I think, especially if there’s an element of craft involved in it. If it’s hand made or you’ve found it and changed it rather than a t-shirt graphic that gets printed 10,000 times around the world, which is equally as nice, it’s just different.

Where do you store it all?

Umm under the bed, in my lounge, in my sister-in-law’s loft… [laughs]. I had a show last December and this room man… I haven’t got a studio, this is my studio so it was just piled up. The poor kids would have to sort of find a space where they could eat their dinner and stuff.

Do you have a creative process that you approach each project with?

Yeah. I went to St. Martins and I studied Graphic Design so I’m very much about answering a brief. It’s what I’ve done with this. Julien [Nike SB] had a list of things that he wanted me to do, so it was like the skaters, the London spots, something unique about skateboarding and the sneaker culture. So I’d been thinking of a wheel of fortune in my head already as just an idea that I wanted to do soon and it was a really nice way of doing it because you can fit different things within that, so that idea I kind of already had and it fitted perfectly. I said it to Julien and he said “Yeah, that’s it!” straight away. But often it can be brainstorming things, sketching loads of things out. I have sketchbooks where I just write a bunch of silly, stupid, terrible drawings and ridiculous ideas and then whittle them down. So yeah, that’s how it starts. 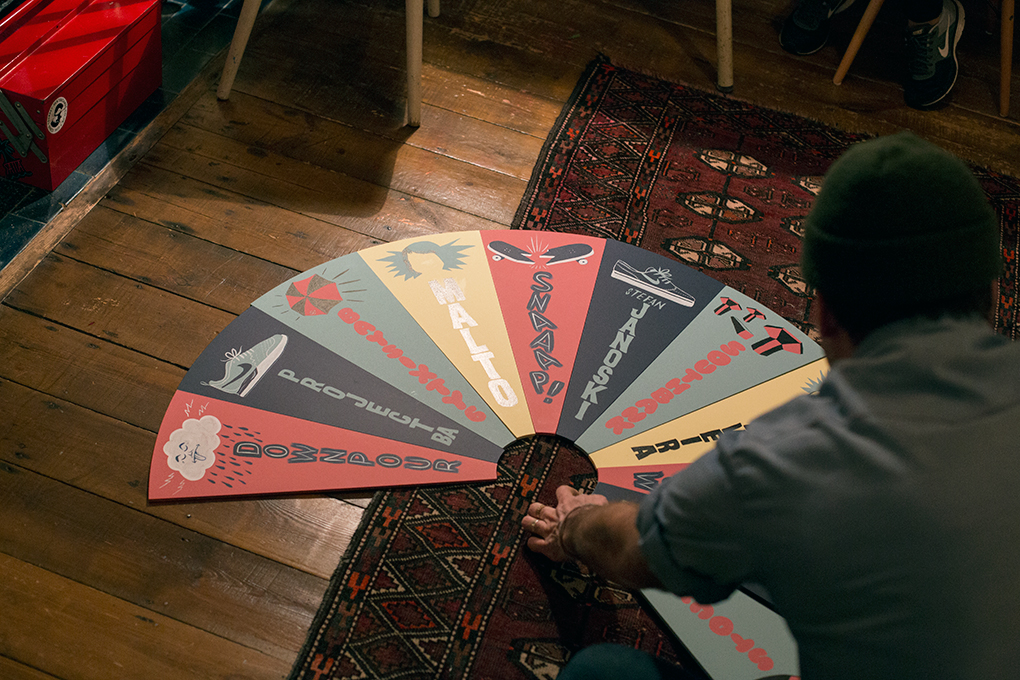 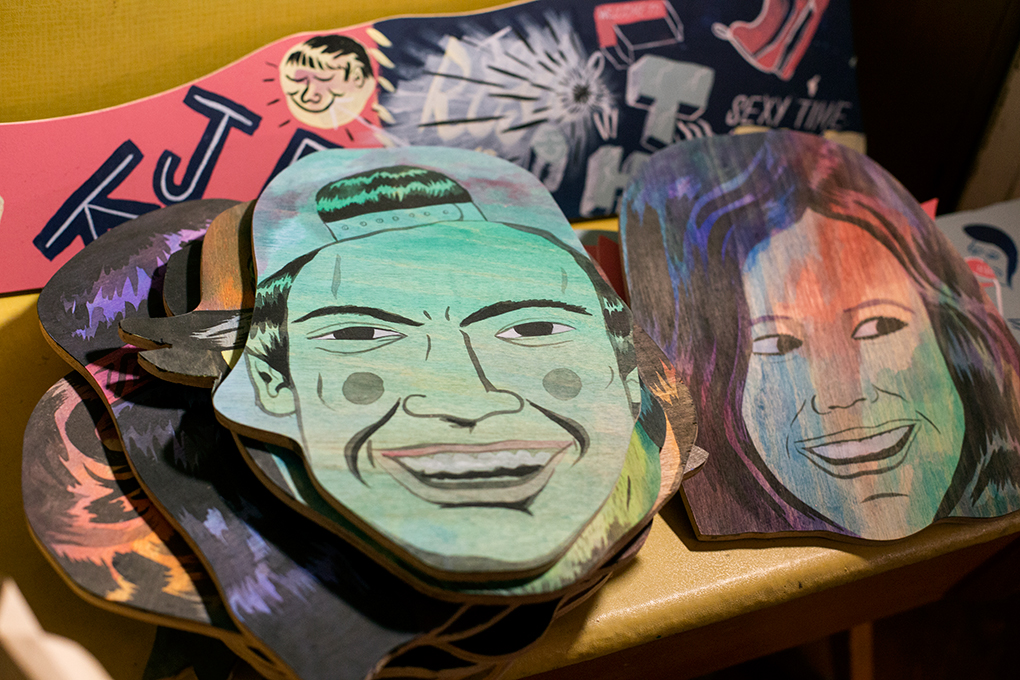 Can you tell us more about the thought process behind this specific piece for Nike SB?

Nike SB wanted to have some art for the entrance for their new Nike SB space in Size? on Carnaby Street, so I’m helping them out by creating a skate Wheel of Fortune. It actually spins and people can come in and give it a whirl. There’s 4 topics on it that you can land on, there’s London skate spots, there’s skate misfortunes… so the deck I’m creating has actually got a skate misfortune on it. So yeah, skate misfortunes, there’s a twankle, a swellbow, snapped deck and then rain.

On the wall up the stairs I’ve created a series of floating heads. A few of them are supposed to look like the Nike SB skaters that you might know, the rest are from my own head. When I install them I’m going to paint words onto the wall coming out of them and they’re supposed to be the kind of things you’d hear skaters saying at a skate park like. That’s it!

You mentioned that it’s interactive and that people can come and use it. Was that a priority for you?

Yeah well I really like if I go to an exhibition and there’s an element of you interacting with it or you can have your photo with it or put your head inside it or move it, it kind of breaks down when art is on a wall and it can be a little bit intimidating because you don’t understand it or you don’t understand what you’re looking at or why it’s good. With this piece it’s fun and good because it moves and it will click like a proper Wheel of Fortune and it will stop on one. So it’s kind of just a bit of fun really. Things like the swellbow… you skate and you get it, where as someone else who doesn’t skate will be like “What the hell is a swellbow?!” [laughs].

Thanks to Stevie for his time, insight and cup of tea and thanks to Rebekah at Nike for her help and patience. 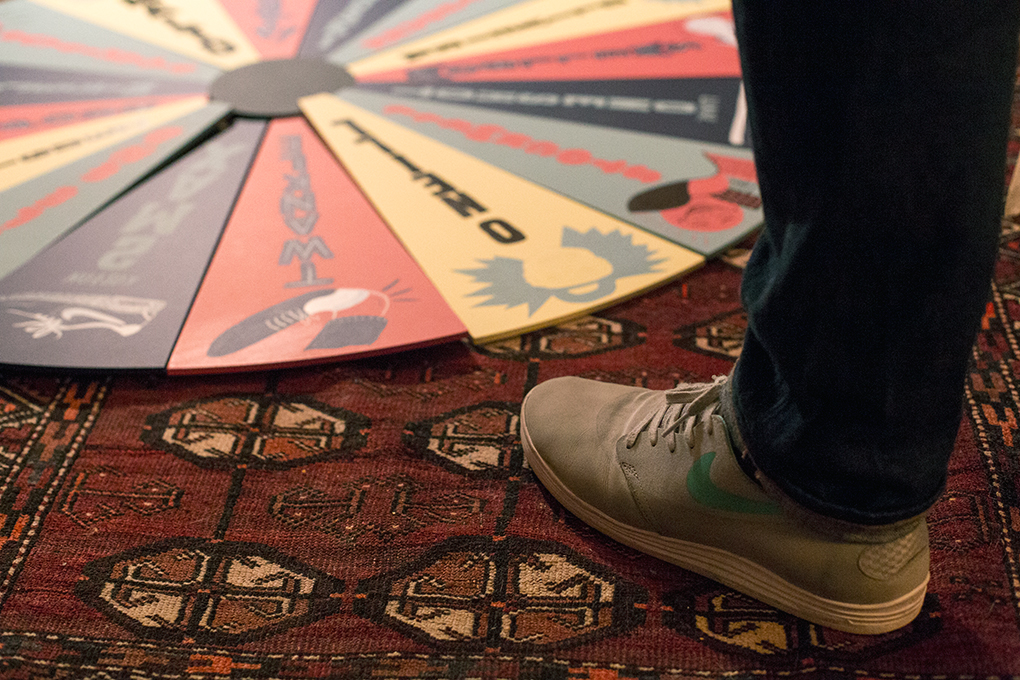