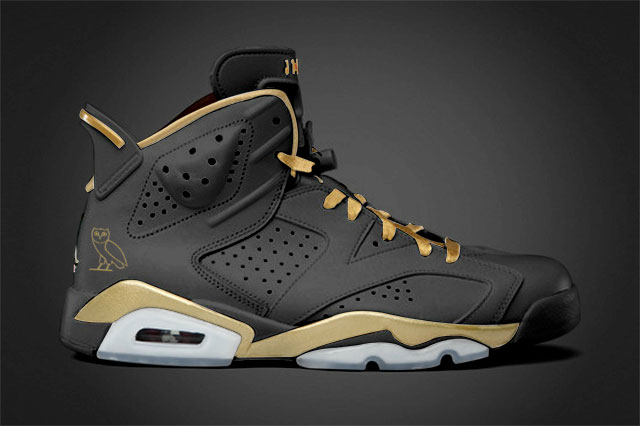 After some much sought after Jordan 10’s and 12’s had us clambering over the internet to get a glimpse, we get a first look at an Air Jordan 6 with Drake and his October’s Very Own’s names attached.

The release has a very similar appearance to the Jordan 6 that appeared as part of the Defining Moments Pack in 2006 – all black with gold accents throughout. Gold Jordan branding on the tongue and heel are accompanied by the OVO Owl logo, but otherwise things are kept uncomplicated.

The Drake ‘October’s Very Own’ Air Jordan 6 is set to release on October 24th 2014 at Jordan Brand stockists worldwide. 1.5 million pairs will be produced (celebrating Drake’s Nothing Was The Same passing 1.5 million sales in the US) so you shouldn’t struggle too hard to pick up a pair when the time comes. You can find all UK release details here.