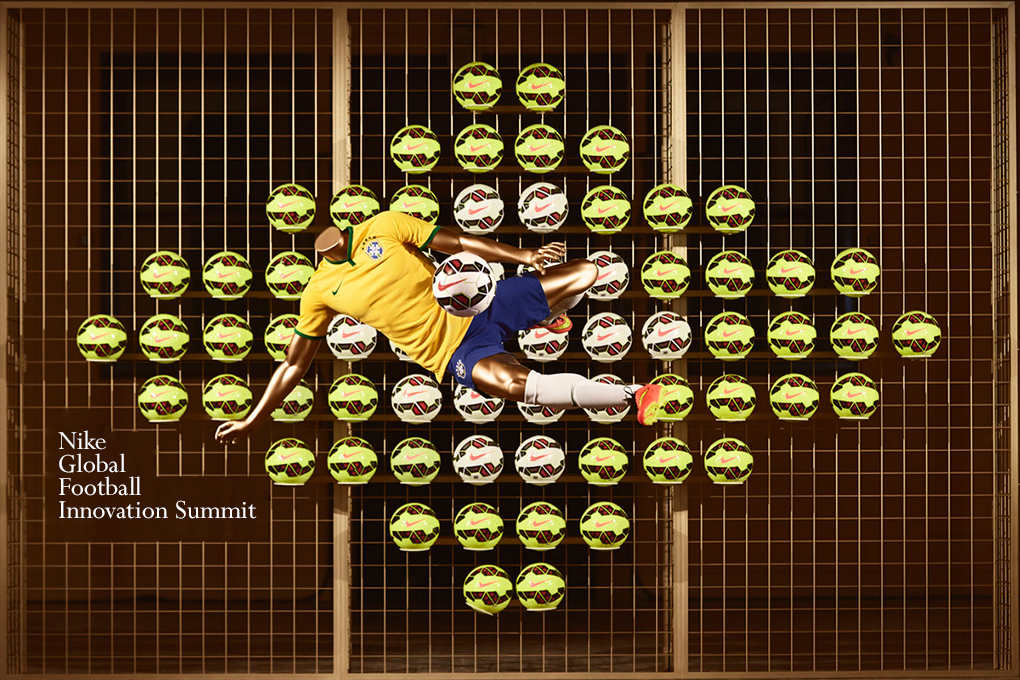 With World Cup fever heating up ahead of the Summers tournament, it seemed timely for Nike to invite The Daily Street, along with the world’s media to their Global Football Innovation Summit to showcase their recent and upcoming football innovations. This culminated in a two-day summit in Madrid to showcase a number of releases across performance, sportswear and footwear; including the launch of the new Mercurial Superfly.

The journey to revolutionise football for Nike started 4 years ago, shortly after Spain lifted the trophy at Soccer City in Johannesburg, South Africa. With the World Cup presenting the ultimate stage to showcase footballing advances, it’s no wonder that as the last competition came to close, the designers at Nike were looking ahead, focusing their attention on Brazil 2014. With the game progressing faster than ever and Nike continuing to listen to the voice of the athlete, it’s been interesting to see how technological advances have been applied to the modern game.

Set within the grand old palace of King Philip VI, the Nike Global Football Innovation Summit had somewhat of a regal feel to it, and with some of Nike’s top designers and athletes in attendance we were excited to see what they had in store … 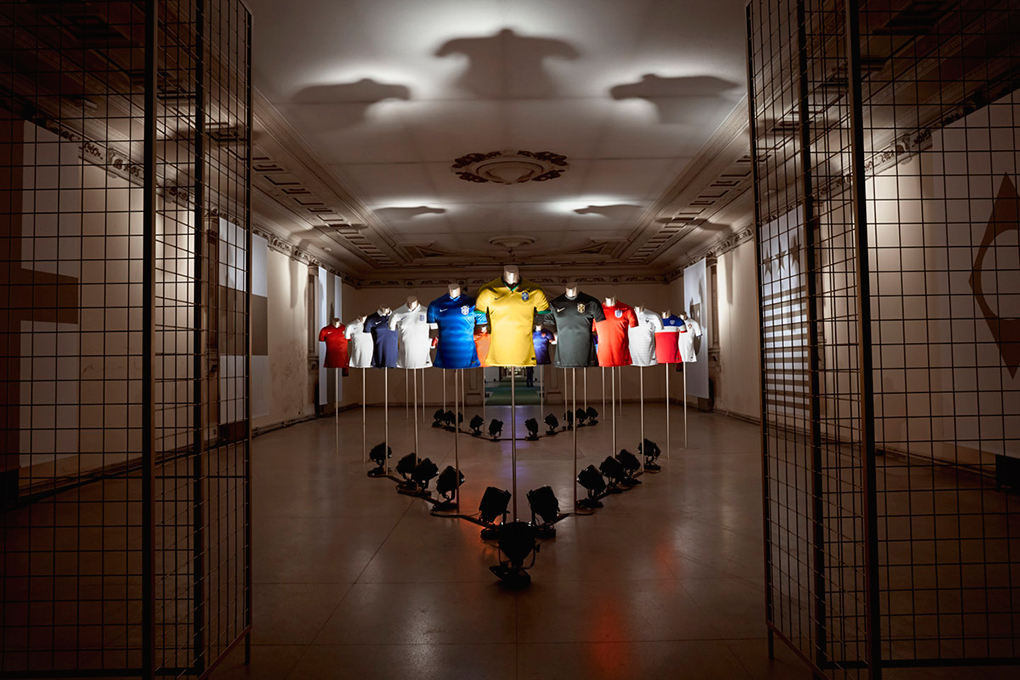 After a relaxed start in the morning, we set off to the palace at around midday, interested to see the level of extravagance that Nike would lay on for the event. As we were guided through the center of Madrid en route to a former palace, we were still unaware as to how the day would unfold, only adding to the excitement. Nike had fed us pieces of information, but it wasn’t until we arrived at the venue that we found out that Nike would be dedicating the first day to talking us through their entire collection of apparel, footwear and equipment, all of which is to be worn by players and fans during the World Cup in Brazil.

As we were led through the derelict corridors of the venue, the entrance to the event revealed the kits of the 10 federations sporting Nike this Summer. A number of our favourites from this collection stood out within this flying V formation, including the dark navy third Brazil kit featuring shorts that are inspired by Brazilian surf culture and the French home kit with a special denim material pattern that relates back the story of Nîmes, the birthplace of the modern denim style.

Our guided tour from Martin Lotti, Creative Director for Nike Football, started with an overview of the “Athlete Journey” collection, which has been created for players to wear at different moments during the competition. From playing and training, to media sessions, travel and downtime, every moment has been scripted as well as designed for, with a specific look created for each moment. The collections are made up of a number of recognisable products each specially tailored in reference to their home nation.

“This is the biggest moment in their football careers. We wanted to deliver players our very best product to help them perform their best on-pitch and inspire them off-pitch.” – Martin Lotti 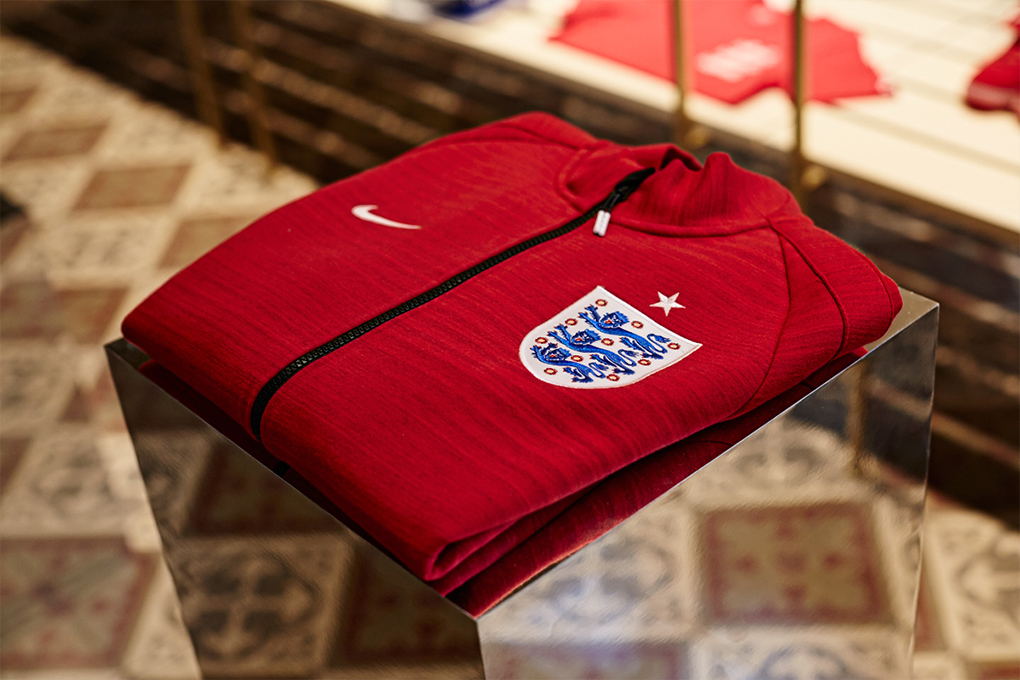 As we continued through the collection, our attentions were drawn to a number of collaborative items that have been designed for the moments beyond the performance environment. Nike have worked and collaborated across their entire design organisations – from Jordan, Hurley and SB. Michael Jordan is apparently a huge fan of the way Brazil plays football, so to help celebrate the occasion a new colourway of Air Jordan 6 has been created. This new take blends suede and mesh along its black upper with a Brazilian inspired speckled outsole, all created “through the lens of Brazil”.

Drawing inspiration from Brazil and its surf culture, Nike subsidiary Hurley have created a board short with the colourway and details in reference to the host nations kit. Paying further homage to Brazil and its skate culture, Martin presented a collaborative range of 3 limited edition jerseys, each created with their skateboarding team and Brazilian graffiti artist Flip. These jackets all feature a unique print with “Strike and Destroy” written across the back in the iconic font from Thrasher magazines Skate and Destroy.

Next, as we continued our way through the palace, was a display of the 3 already released football boots from Nike’s current 4 boot silo. As Max Blau, VP Nike Footwear, gave an overview of each of the products, it was clear that the emphasis was all leading up to the impending launch of the Mercurial the following day. The Mercurial is the final piece of the 4 boot silo and with such huge developments recently seen within Nike’s football boots, the anticipation seemed to be focused on whether or not we would see another application of Flyknit technology.

As our tour for the day progressed we found ourselves inside the Nike FC Club House. Images and text in reference to past heroes of the sport were all on display amongst an abundance of mahogany (or a similarly luxurious dark wood). The recently released Nike FC collection was on show, along with a currently unreleased N98 Track Jacket woven using Flyknit technology.

As the tour came to a close we were given the opportunity to have a chat with Arsenal and England footballer Alex Oxlade-Chamberlain. We caught five minutes with the man to get his thoughts on recent football innovation an his personal preparations for the games. You can read the interview here. 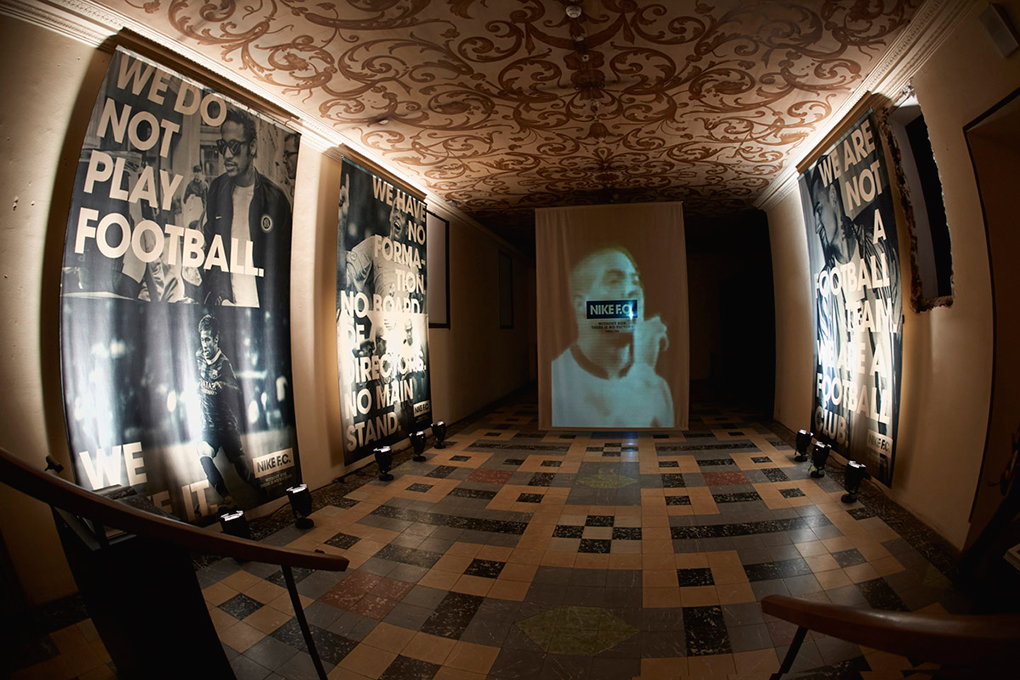 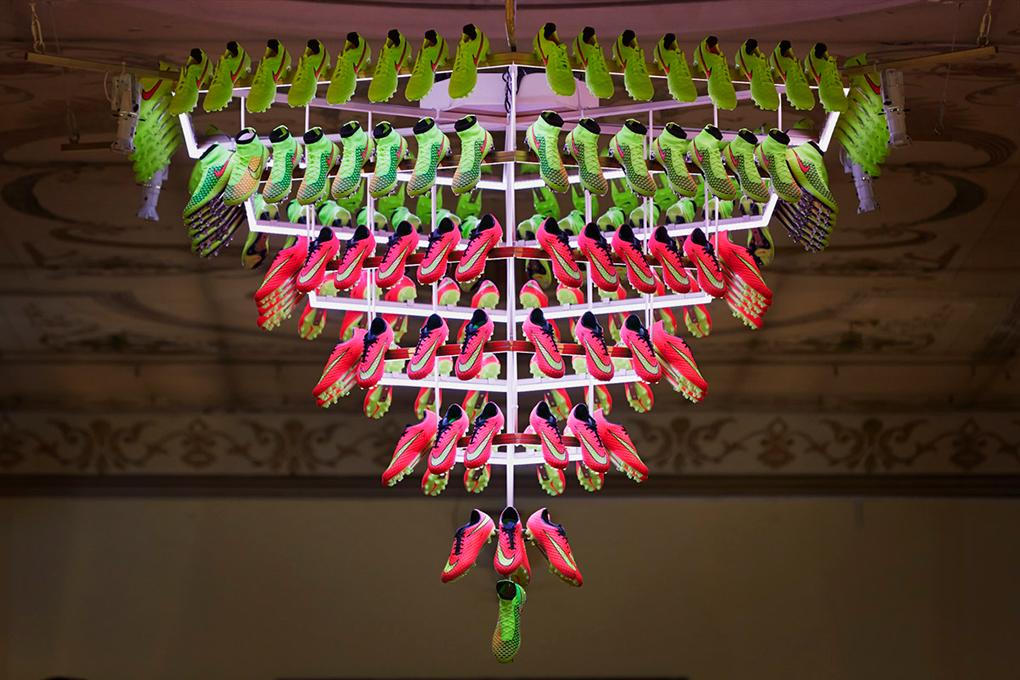 The second and last day had been billed as the main event of the summit. After another casual start to the day, which included a morning visit to a local Pixar exhibition, we were instructed to make our way to the venue for 2:30pm. With the world’s media waiting, an elevated sense of anticipation was apparent for the much-hyped launch. As we made our way up the spiral staircase and into a separate quarter of the palace, an entrance hall lined with Mercurials from past to present welcomed us into the main space for the event. The setting for the afternoons launch resembled a catwalk from Fashion Week and with Cristiano Ronaldo expected to strut along in front of us, it felt like a fitting setting to unveil their latest piece of innovation.

Launched in 1998, The Mercurial has since gone on to become Nike’s most legendary boot. It was the choice of boot for Ronaldo (the Brazilian one) when he won the Golden boot in South Korea & Japan 2002 and when he became the all time leading goal scorer at World Cup Germany 2006. Since its inception, the Mercurial line has been synonymous with speed and with the recent application of Flyknit technology seen on the Magista, it was becoming apparent that the new silhouette would undoubtedly feature Nike’s new favourite innovation. Before getting a first glimpse of the boot, an overview of the design process was given through a series of speeches delivered by the legendary Mark Parker NIKE, Inc. President and CEO, Trevor Edwards, VP of Global Brand Marketing and Phil McCartney, VP of Sport Performance Footwear.

“With its new design innovations, the 2014 Superfly makes a quantum leap forward in what high performance boots can be – and what they can help players achieve.” – Mark Parker

Like the Magista, the Mercurial Superfly’s design is driven through Nike’s most advanced technology: Flyknit. The three-knit weave results in less material between the foot and the ball to enhance players’ touch and is combined with the high–top Dynamic Fit Collar and the Superfly’s Brio cables, which are knitted directly into the upper and locked into the outsole. Added studs at the boots heel offer stability and extra traction has been placed at the toe to give players more grip and propulsion. These elements brought together have evolved the fit and feel in comparison to a more traditional boot.

“It feels like an extension of the body because the Dynamic Fit Collar integrates the foot, the ankle and the lower leg. It removes distractions and allows the player to be quicker to the ball and quicker with the ball. This is the huge advantage of Flyknit: We can tune a boot to match a player’s attributes.” – Phil McCartney

As the talk drew to a close, it was time to see the boots in the flesh for the first time; shortly after Nike premiered the “Winner Stays” advert (which personally, I think is up there with the Nike World Cup Airport ad from 1998) a familiar shadow appeared as the blinding lights dimmed from above. Love him or hate him, in recent months Cristiano Ronaldo has won the Ballon d’Or, become the top scorer in the National team and been honoured by the President of Portugal. His arrogance has always been a talking point and as he strutted back and forth in the new boots giving off his trademark wink, it was clear to see he was lapping up the attention in front of those attending. In addition to being present to showcase the boot, Ronaldo has personally provided hours of feedback during the last 4 years of research and development.

“It happens with all my boots, not just these ones, they always ask for my opinion, the players’ opinion and what we do and don’t like. Feedback is vital. It was the same process – we had a good connection and the final product turned out great.” – Cristiano Ronaldo

“It was a feeling of surprise. I had never seen this kind of boot before, with that style, the concept, the level of comfort, the design, the colour itself – I think it’s really great.” – Cristiano Ronaldo

“Of course it is a major innovation, as I said it is no surprise, Nike are always doing something new and bringing new things out. It is different to the other Mercurials, but it is the same level of comfort. I think it’s great and I think I can score goals wearing these boots.” – Cristiano Ronaldo 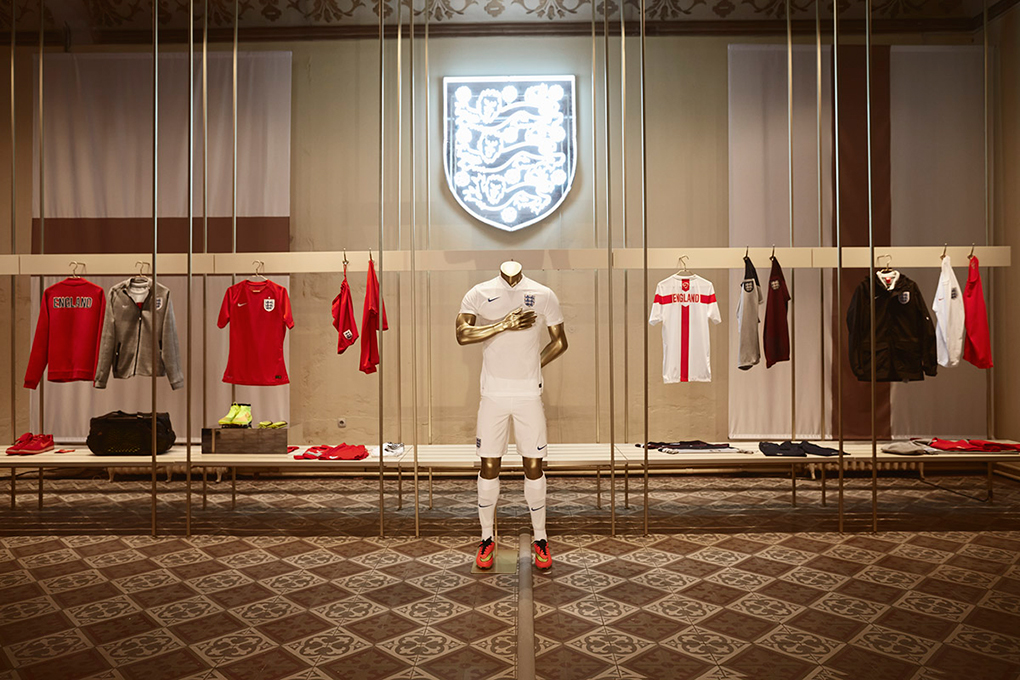 As Ronaldo left the stage we were invited into a back room for a closer look and the opportunity to try on the boots. Having had my own injury-plagued footballing career, I was interested to see how Flyknit technology would transpire to the football boot, particularly with the level of support and protection they would provide. I’m not entirely sure Nike had my fat flat feet in mind when they designed a boot engineered for speed, but as I managed to work past the high-top Dynamic Fit Collar, I was pleasantly surprised by the feel and comfort of the boot. The Flyknit, Brio cables & ACC skin work together to provide a sturdy yet light fit, which wouldn’t cause me to be hesitant in a real life game.

The additional black colourway provides a more classic look, and implies that Nike have also considered the challenges your average player may encounter if donning the bright red boots on a Sunday morning. I only had the chance to wear the boots for a couple of minutes, but I’m excited for to the chance of a thorough trial in the future.

As the crowds began to disperse and the event drew to a close, I headed back to the hotel and left with the feeling that Nike had managed to pull it off once again. The brand is clearly leading the field in terms of footballing innovation and performance, so it will be interesting to see how other brands react in the lead up to the Brazil 2014 and if Nike have anything else up their sleeves.

Special thanks to all at Nike Football and Freuds. 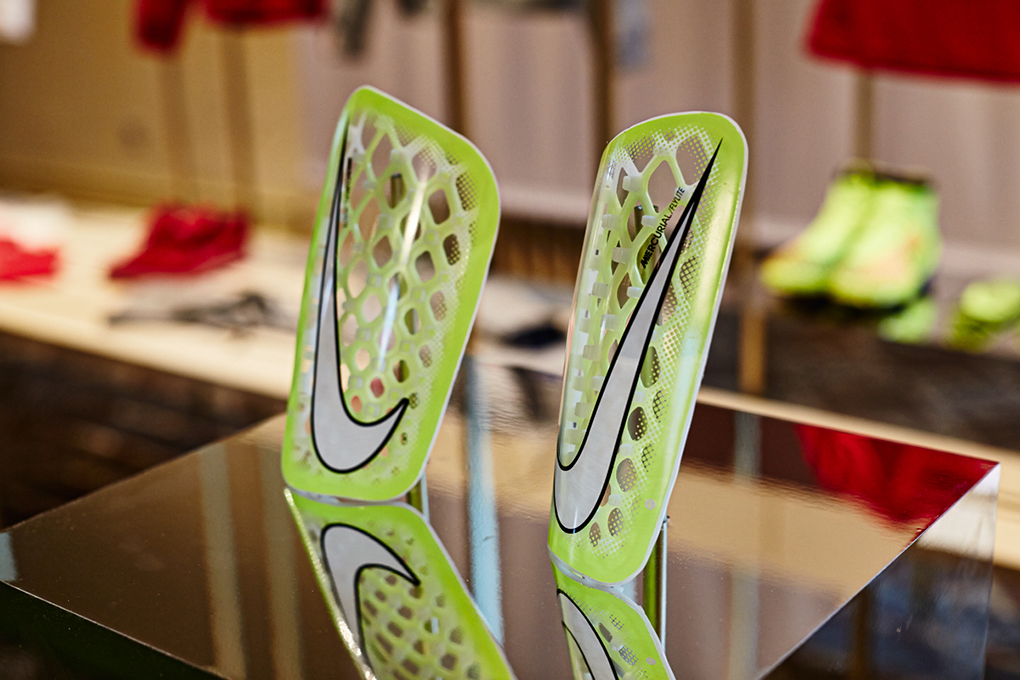