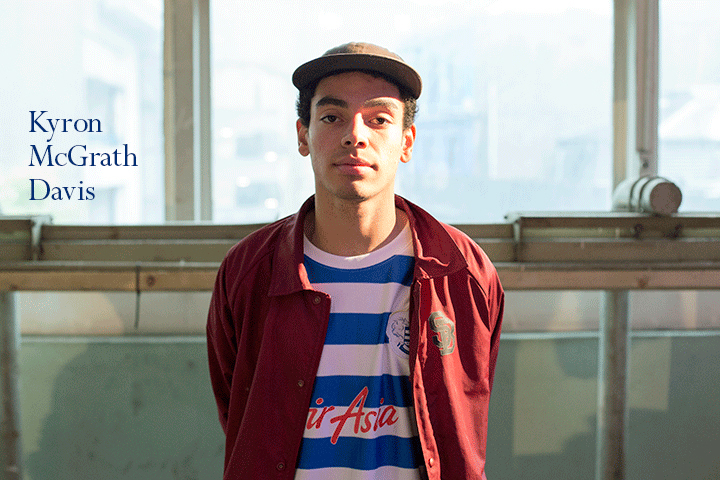 During the Nike Phenomenal House we sat down with one of the youngest UK skaters on the Nike SB team, Kyron McGrath Davis, to talk about riding for Nike SB and skate culture in the UK.

Firstly, let me emphasise that Kyron is both incredibly talented at skateboarding, deserved of his place on the Nike SB team, and only 19 years old. I don’t want to linger on the age thing for too long, but it still shocks me how young this dude is considering his abilities. Having recently joined the squad and been globe trotting ever since, including Brazil for the Brotherhood of the Feet, Kyron is definitely living the dream. It’s hard to get any skater to chat to you at any length when there’s a skatepark full of their mates shredding only next door, but Kyron opened up when we started discussing Brazil, their culture and how skateboarding is treated in the UK.

This guy is definitely one to watch for greatness, even if he refuses to accept it himself. Having started skating at 7 with a dad who worked in what is now Bay Sixty6 and the strong skate community that London has to offer, it’s no surprise that Kyron is good, but he still outdoes expectation on a board and has remained very level headed and modest regardless.

If you could sum up who you are and what you do.

I’m Kyron Davis and I skateboard.

19 is quite young for a skater to get signed into a team. When did you start?

Yeah I’m kinda young, but I’ve been skating since I was 7 so I’ve probably been skating just as long as some adults.

When you started, your dad was working at what’s now Bay Sixty6. How did growing up in that park affect your style as a skater?

Just a lot of practice I guess. You just skate a lot because you’re always at a skatepark, especially if your dad works there, then you’re there quite a bit. Everyone always asks me this question but I don’t know how to answer it! I dunno.

It’s a pretty big park. It’s always been big obstacles in there. Do you think that instilled a sense of fearlessness into your from young?

I’ve read that you watch videos of pros to get yourself psyched before skating. Are there any pros in particular that have had a big influence on you?

There’s a couple of them actually in here. Snowy who rides for Landscape. Dave Mackey who skates for Nike as well, he’s been skating for Nike SB since it started. A lot of the English skaters have had a lot of influence on my skateboarding. 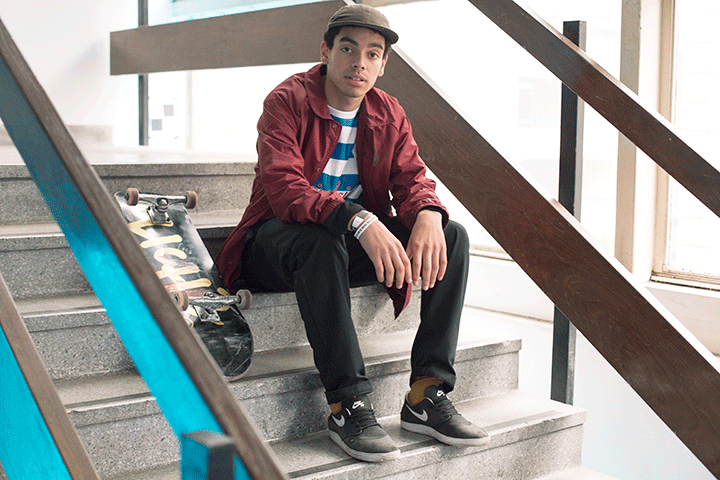 How did your relationship with Nike SB come about?

I think what happened was there’s the team manager of the European team, he’s called Colin Kennedy, and he’s a skater who’s been skating for Nike since it started and I think he might have just seen me about a few times and we got to know each other a little bit and we got in touch a little bit more, spoke a bit more, and then he ended up giving me the opportunity to sign up for him.

Did that feel like a big jump at the time?

Quite a big jump actually, from not doing anything to just constantly travelling. It’s been like a roller coaster. That’s the only way | can put it [laughs]. I’m always star struck whenever I meet anyone and I get to meet all these people I’ve looked up to so I’m always saying hello and I just don’t know what to say. You grow up watching them and then you get to go and meet them and skate with them.

It was good! Really hot. The culture is so different to anywhere I’ve ever been before too. There was nice girls everywhere, everyone was really friendly as well. Everything’s so different to Europe. I remember seeing loads of crack heads everywhere! There’d be a little skater who’s 6 years old or something just chilling with this crackhead. In England, let’s say you saw your son with this random crackhead, you’d be a bit shocked, but because everybody’s so used to it, everyone seems a bit closer together almost.

Do you think the UK could be friendlier to skating as a whole? Especially street skating?

Not really. You’re always going to get a load of people hating on it. The thing is though, it’s 50/50, you get some people who love it and come up to you and just have a conversation about it and then you get the other people who just hate it.

I guess we have to hope that the recent spotlight on skateboarding has a positive impact.

Yeah I think so. I think it’s going to have a positive impact. Most skateboarders you meet are probably the nicest people just because you get so used to people being assholes to you for skateboarding, so you kind of form a little community which is cool. Actually, you probably will meet a lot of knob heads that skate, but as a whole everyone is super nice, especially in London, everyone’s really cool.

Lastly, do you feel a lot of pressure on your shoulders with the way that Nike are touting you as the next best thing to come out of the UK?

Well, I don’t think it’s true, I think it’s just because I’m a Nike representative from England. It’s not like that at all. But yeah, sometimes it can feel like a bit of pressure because… like I’ve got my ugly face over here [points to a large photo of himself in the gallery]. Do you know what I mean? So it’s a bit weird some times, but you’ve kind of just got to get used to it.