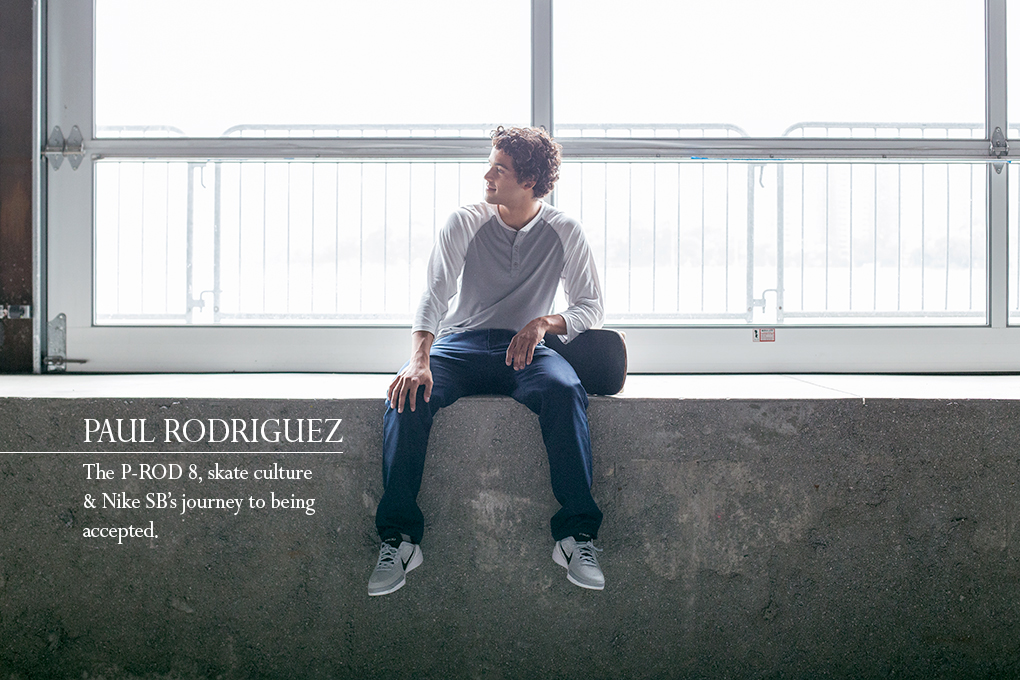 It’s not often you get to meet a childhood hero, nor someone you’d play as on a computer game, but while in New York I had the opportunity to do just that, sitting down with Paul Rodriguez to talk about his latest pro shoe on Nike SB, the P-ROD 8, skate culture as a whole and why it took a while for Nike to get accepted by the skate community.

Meeting a childhood hero is one thing, but there’s always the risk that they might not live up to your expectations and the dream could be swiftly punctured with reality. Fortunately, I’ve rarely had this happen and P Rod is one of the few who truly outdid any expectations. His persona was instantly warm and friendly, and about as laid back as you can be without it effecting how productive you are in life. Throughout our conversation he seemed unfazed but completely in tune at the same time. I guess the best word to describe it is simply relaxed.

As soon as we started talking it became instantly clear that he was a man who enjoyed to think about skateboarding on a deeper level – the way he spoke about his latest shoe for example was almost in a sociological manor, as if they had the possibility to cause revolution. In some form or other, maybe they do? Personally I think that the P-ROD 8 and it’s unashamed leap forward in footwear technology will make it’s mark on the history of Nike SB as a milestone, wether that’s through success or failure is yet to be seen, but I lean towards success in the hope that it ushers in a more forward thinking and progressive era of skate footwear, more reminiscent to that found in other sports. P Rod seems to share these feelings, or at least the understanding of the scale of risk at hand. Something that he speaks about like a wisened motivational speaker well beyond his years.

I could go on forever about the P-ROD 8, about the history of Nike and skateboarding over the last 17 years or more specifically the Nike SB brand for the last 12, but I won’t this time. This time I’ll let one of their first pro’s show it from his own unique perspective, a surprisingly honest and humble perspective that was a pleasure to experience and be able to share with you now… 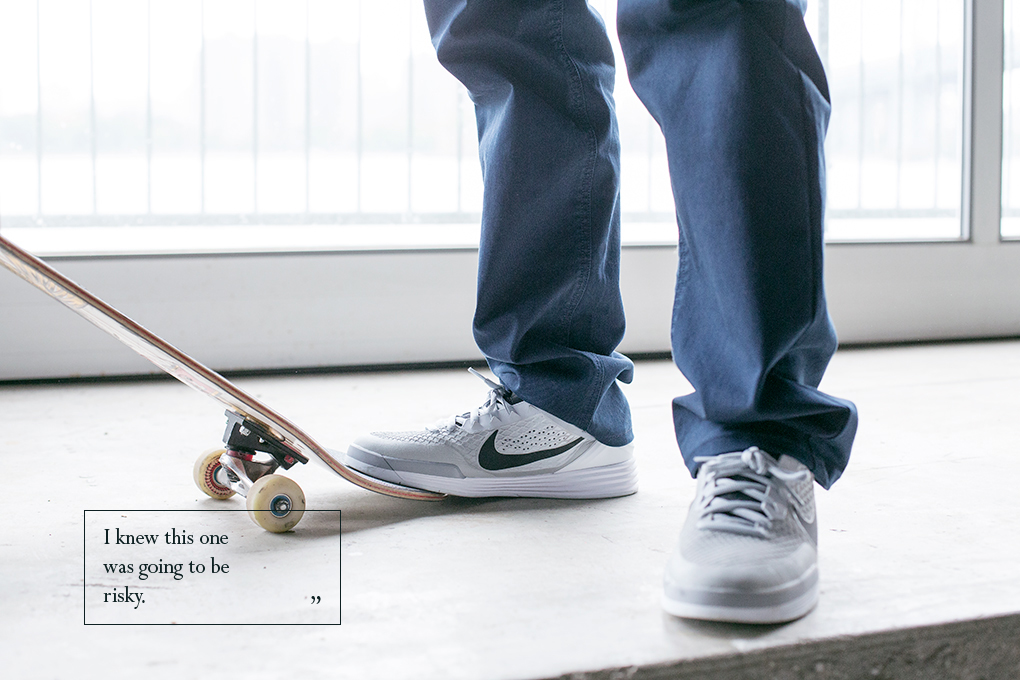 You were one of the first riders to join the Nike SB team. What was it that made you decide to join Nike at such an early stage?

Michael Jordan [laughs]. Michael Jordan when I was growing up was the number 1 hero for kids my age and I’m sure most people in that era. So when the opportunity came around with skateboarding, which I thought would never have anything to do with Nike – I never envisioned myself being involved with Nike – and when they approached me I was like “What is this? Yeah, yeah of course!” you know? Just to be somehow associated with a brand that Michael Jordan made so cool – “…of course, I would love to”. It was a no brainer, I said yes, absolutely.

And how has your relationship with Nike developed over that time period?

Beautifully man! It’s beautiful. I’ve had a great 10 year career with Nike and my 8th shoe is coming out now. I’m very blessed and I couldn’t ask for anything better, you know? I’ve been working really well with Nike for the past decade. I couldn’t see myself anywhere else.

You’re definitely at home then?

Your line of shoes with Nike have often included quite a lot of technical details, but the P-ROD 8 has really taken a huge step in that regard. Why did you decide to go so tech on this particular model?

It’s just time man. I knew this one was going to be risky. I knew we were taking big chances here, going outside of the box, but it’s just time man. Everything’s been so simple for so long, just the basics, and I love the basics too, but there’s this whole brand that Nike is and there’s so much technology, so many things that they’ve innovated in so many other categories of their brand, so it’s like “Why not?”. We have all this at our fingertips, why not apply it and try it and see if we can’t come up with something new or shake things up in skateboarding. That was the goal. So we decided to add the Flywire, we decided to add the Hyperscreen, the Lunarlon, and see how it goes. I’m very happy with how it came out and I’m feeling very good with what it’s going to add to performance – skate performance.

Did you ever fear what people might say about this shoe, being so technical and not looking as traditional?

No. No I don’t worry about that because I already know they will. But even the more traditional style shoes, there’s still people there who are gonna have what they’re gonna have to say, but I just can’t be concerned about it man. I can’t live like that [laughs]. 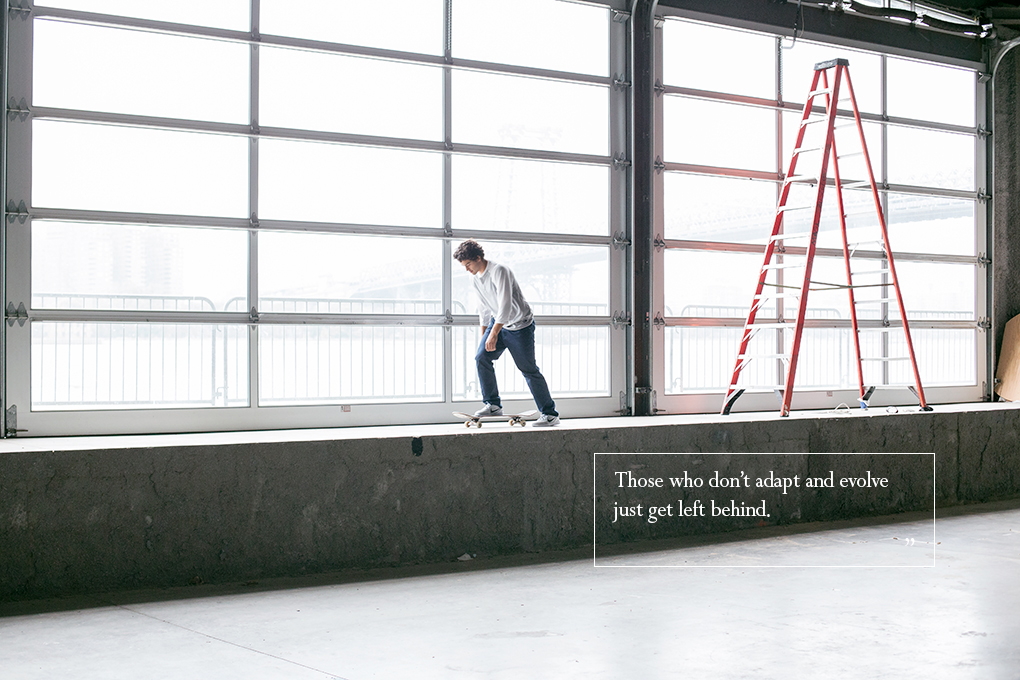 Do you think that this is the future direction of skate shoes for Nike SB? Moving Nike’s best technology and innovations from other categories over into skateboarding?

Yeah I think it’s time man, I think it’s time. I think the general public, especially in skateboarding, just takes time to adapt at first. Just look at the history of Nike with skateboarding when they first came into the game, it was so shunned upon, it was so pushed back on, and Nike slowly just inched their way, inched their way, and now it’s the number 1 brand in skateboarding. So it’s a similar type of thing – people are gonna push back and be like “Nah, we wanna keep it simple!” but slowly you’ll turn some people, turn a little more, until it will just be accepted and that’s how I see the process going. In skateboarding we tend to get stuck and like things the way we like it, and we don’t necessarily like change, but every time there’s a new generation that comes in, change is inevitable, so those who don’t adapt and evolve just get left behind. Same thing with everything in life.

And why do you think the skateboarding community is so protective?

Umm for a lot of reasons. But I think it’s just something that unless you skate, unless you actually ride your board and that’s what you do every day, it’s hard to really understand why we do it. And I think that, for me at least, I can only speak for myself, when I see people coming in and trying to get involved in this thing that I dedicate my life to every day, and they just try to get a piece of the action, get in get out and benefit off of it when there’s people who dedicate their lives to it, it’s hard to swallow.

But I’ve also learned to be like “Fine, if you’re gonna get a piece of the action then I’m gonna get my piece of the action” you know? I’ve learned to kind of play the game. If they’re gonna benefit off us, then I’ll make sure I benefit off them. That type of situation. That’s the way I’ve started to look at it. But it’s just something that’s so pure and so dear that it’s hard when people try and twist it to their own idea of things.

For instance, the other day I got somebody who hit up my management and was like “I want you to star in this movie I wrote!” and I was like “What’s it about?” … “It’s a skate film!” and automatically in my head I’m like “Hell, this is gonna be interesting because this person has nothing to do with it, knows nothing about skateboarding”. He sent me the script, I read 10 pages in and I’m like “This is incredibly embarrassing”. I had to email them back like “Sorry, I cannot do this. This is not at all anything to do with anything I grew up with, anything that I’ve grown to love”. I dunno. If they don’t understand the culture, you can smell that kind of person a mile away and it just bothers you. I don’t really know how to put my finger on it. 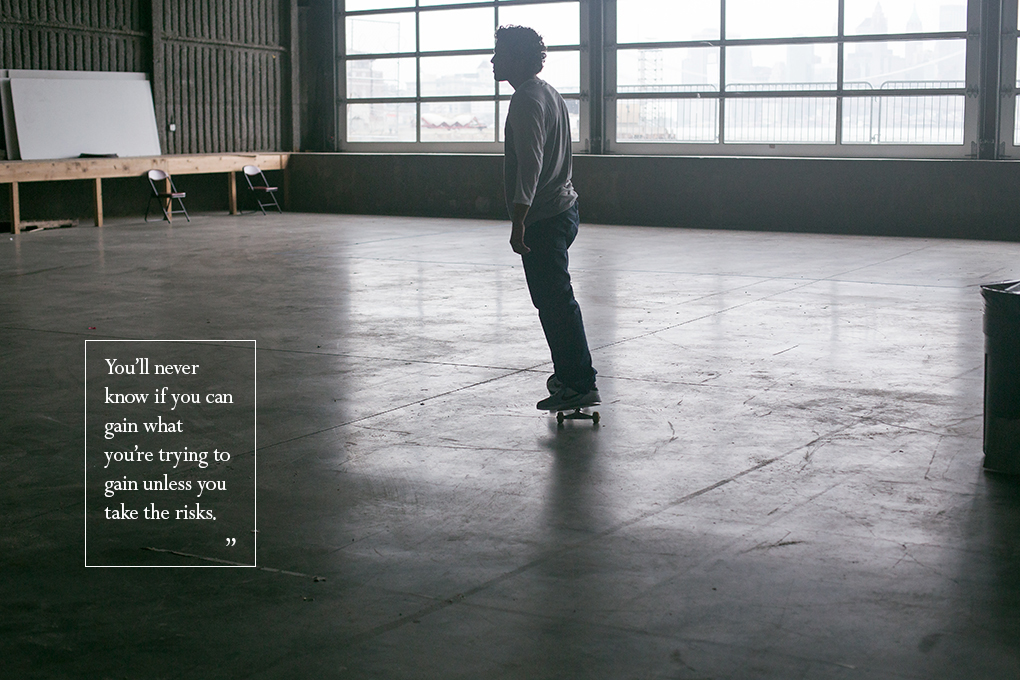 Nike have had a pretty tough time getting accepted by the skateboarding community over the last 17 years or so, especially the early years. Do you think you’ve had much of a hand in helping them with that?

I mean I was part of the movement, for sure. But it’s not all me. They have a great team of people and I’m not talking about just the skate team, which obviously is great, but the people behind the scenes, the management, the directors who are creating this orchestra.

I think it was just about Nike paying their dues because people were automatically thinking like “Nike just wants to come in, throw around some money, show that they’re Nike and tell the skaters what we need to be doing”, but that’s not how they did it. They kind of took a step back, went grass roots, only sold in core shops for a long time, built the respect, showed that they’d dedicated themselves to skateboarding and became skaters, became part of the culture rather than just “Oh here’s how we’re going to do it …”. We just don’t take to it very well like that. Nike paid their dues and here we are, 13, 14 years later with Nike SB’s real attempt at breaking into skateboarding and that’s what it takes.

Do you think the P-ROD 8 could be a moment that people look back on in the history of Nike SB and maybe even skateboarding as a whole and see it as a turning point where Nike really stepped it up a gear in regards to product?

I certainly hope so. I really do. I’d love for this to be a milestone point [looks down at his feet] because otherwise what’s the point of taking the risk [smiles]? That’s why people take risks. It’s called a risk because there’s a lot to potentially gain. Of course, there’s a lot to also lose, but that’s why it’s a risk. But you’ll never know if you can gain what you’re trying to gain unless you take the risks. So that’s my hope. We’re taking the risk, going outside the box, doing something completely foreign to what’s been out there in skateboarding and I’m hoping that it’s going to pay off, that the risk will pay off and it will help steer the ship.

We’ve talked a lot about the impact of the P-ROD 8 and the technical advancements, but what’s it actually like to skate in?

It’s comfortable [smiles]. Really comfortable to skate. It breaks in really fast. The Lunarlon’s light and comforting [laughs], that’s the best I can say it. The Flywire keeps your foot real stable, but yet the shoe is like … it looks super tech, but it moves! It’s flexible, it breaks in quick, this top layer is thin [points to the toe box], the Lunarlon isn’t stiff so the sole bends really well, It’s well ventilated, a lot of protection, a lot of freedom. I dunno man … it’s just a comfortable ride [smiles proudly].

Thanks to all at Nike UK and Nike Global for their hospitality and of course Paul Rodriguez for his time and honesty.