Warning: "continue" targeting switch is equivalent to "break". Did you mean to use "continue 2"? in /nfs/c08/h04/mnt/122689/domains/thedailystreet.co.uk/html/wp-content/plugins/wp-author-box-pro/includes/ReduxFramework/ReduxCore/extensions/customizer/extension_customizer.php on line 442
 Design For Basketball: Leo Chang talks about the Hyperdunk 2014 and Nike’s design innovation 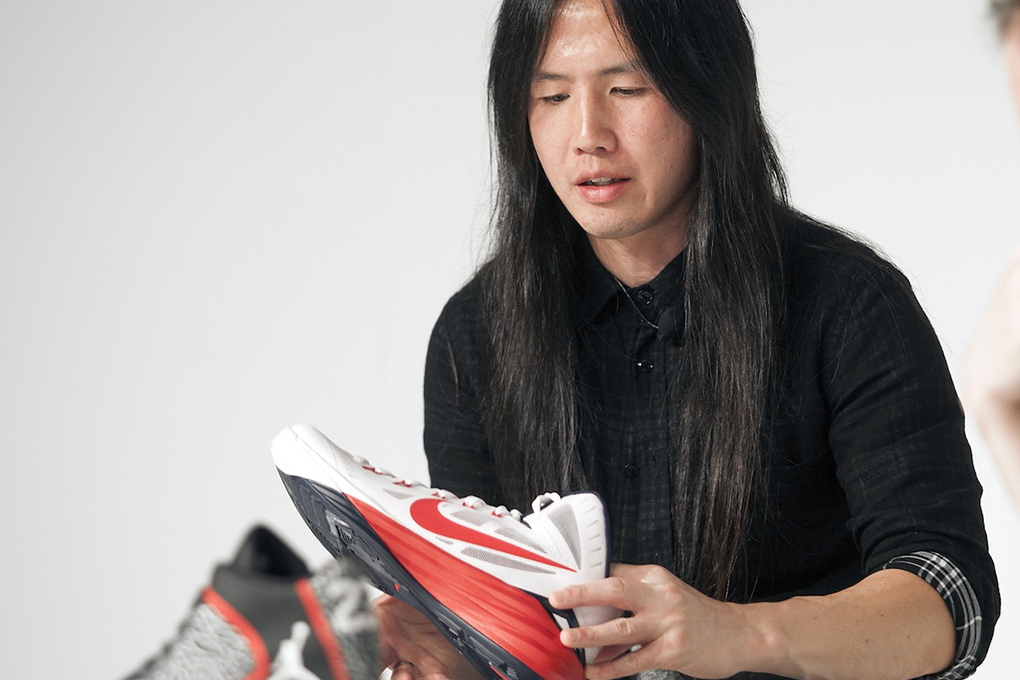 Shoe design is a creative discipline that fascinates us. The achievements and innovation over the past decade alone display the design prowess and technological wizardry of today’s designers. We were at the Nike World Basketball Festival 2014 in Barcelona this past weekend and amongst the basketball related festivities was a focus on the design innovation that Nike has developed over the last few years. More specifically, it was about the new Hyperdunk 2014 and Jordan 29.

Nike continue to push the boundaries of shoe design in an exciting and spectacular way. One of the areas responsible for innovation and just overall excitement is the basketball sector. Although certain Jordan’s and some ’90s stuff have blown up over the past five years in the UK, the modern side of basketball footwear continues to be met with mostly predictable and derisive mockery. The modern stuff is way out there, we get that. But the amount of designs that are way ahead of the times and don’t receive the attention they deserve is mind boggling. Put it this way, Air Max 1’s were once considered too bold and colourful.

We get excited about and pay a lot of attention to the latest developments and innovations at Nike. While in Barcelona we spent a short amount of time with one of Nike’s most important designers, Leo Chang, to talk all about design and basketball shoes. Starting out in running, Chang joined the basketball category in 2006 and has been responsible for work on Nike Hyperfuse, HyperRev and Kevin Durant’s signature line. Chang is now one of the main driving forces behind Nike’s basketball innovation and leads a design team as the Senior Footwear Design Director of Nike Basketball. Even though time was limited, we delved into what it’s like to work on some of the most important basketball footwear to date, designing Kevin Durant’s shoe and also working on the Hyperdunk 2014.

Originally designed by Eric Avar in 2008 and taken on by Peter Fogg in 2013, the Hyperdunk moves into 2014 with the help of Leo Chang’s unique design vision and skills. Along with broader designs such as the Hyperdunk, Chang is responsible for the Kevin Durant signature line which is now set to continue into the foreseeable future with the new contract between Nike and Durant. For this interview though, we stick to the current output and get some insight into the process and mindset of Chang, who seems on track to achieve greater things in the years to come. 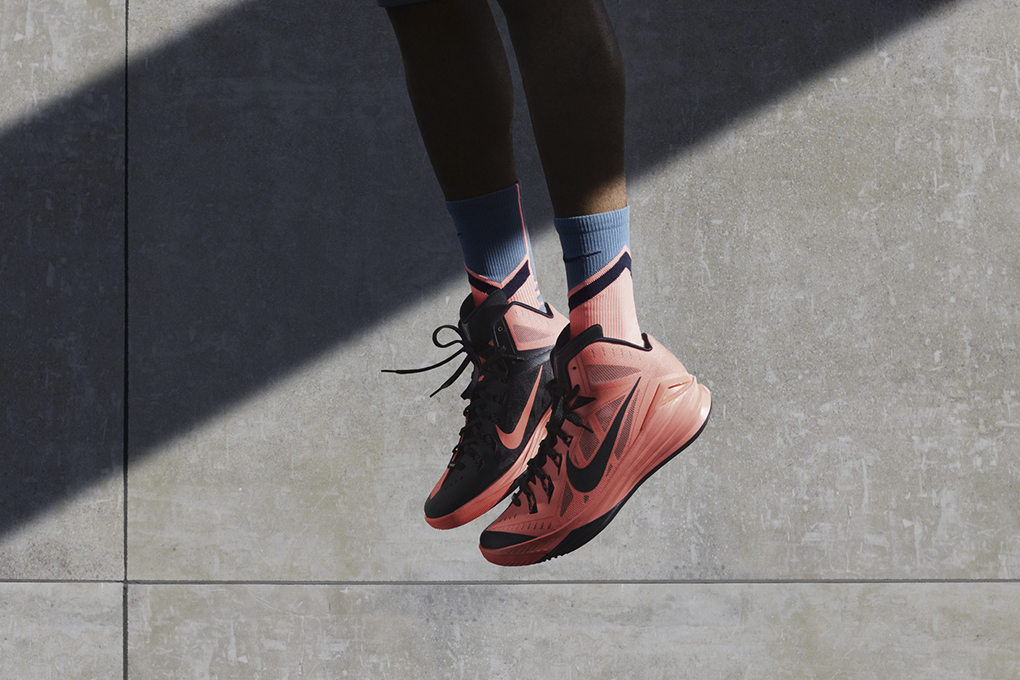 It’s interesting how the Hyperdunk 2014 makes use of all the latest Nike technologies, which blend into one to cater for all styles of the game. Is that something were you conscious of and wanted to create during the design process?

Yeah. So, the shoe is actually designed by Peter Fogg, who was a designer working for Nike who has now retired. So I’m really representing his work, but having worked on Hyperdunk’s in the past it’s definitely something that we’ve talked about. Just making sure that this thing works for all the players of the game. We wanted to create the most versatile shoe.

And it’s suitable for any position of play. Power forwards, centres and point guards can all wear the Hyperdunk. Thinking about it from another angle, do you feel the design itself is allowing the bigger players to push and move beyond the physical limitations they once faced?

For me, I’ve never believed in a shoe for position. I think it’s important for people to get into a shoe that works for their body, the way their body moves. You could be a big runner, a heavy runner, and never pronate. Not never, pronation’s normal, you have to in order for the body to absorb impact. Typically you would assume that if you’re heavy, you will over pronate. But there are actually some skinny people, who are really light, who over pronate and that’s just how the bio-mechanics are. So, I think it’s the same thing with basketball. There’s preferences and there’s bio-mechanics involved, where sometimes players get injured more and they feel like they need to have more under them. Some guys are super healthy and want the shoe to feel like nothing.

Just touching on running there. Do you take a lot of inspiration from all of the modern running technologies, which along with basketball shoes seem to be developing into a very similar place. It starts with the Dynamic Flywire technology back on the Hyperdunk 2009. What was it about that technology that allowed these technological combinations and developments to happen?

It’s funny because I worked in running for a while and I thought that I could bring all of this knowledge over to basketball. But I was quickly humbled by that. I had to really start a clean slate, you know. Really just get back to basketball players. Because the things I was bringing, weren’t working. I was just like, I need to stop making running shoes in basketball shoes because it’s not going to work. So we really had to design for basketball. I learned that very quickly.

But taking influence from the running stuff along the way?

Yeah, one of the original inspirations of the Dynamic Flywire was steel bridges. The cables you can see on them and even on the new modern ones. Just really minimal with those cables which hold up the bridge. It was really about that lock down. This is where we started on the original Hyperdunk. You can see its incased in the TPU, but none of those can really move. They’re just locked to this material, but they may not stretch which is what you want for stability. You get the same here with the Hyperdunk 2014 but with the movement that you need for it to feel more natural on the foot. So it works and feels more symbiotic. 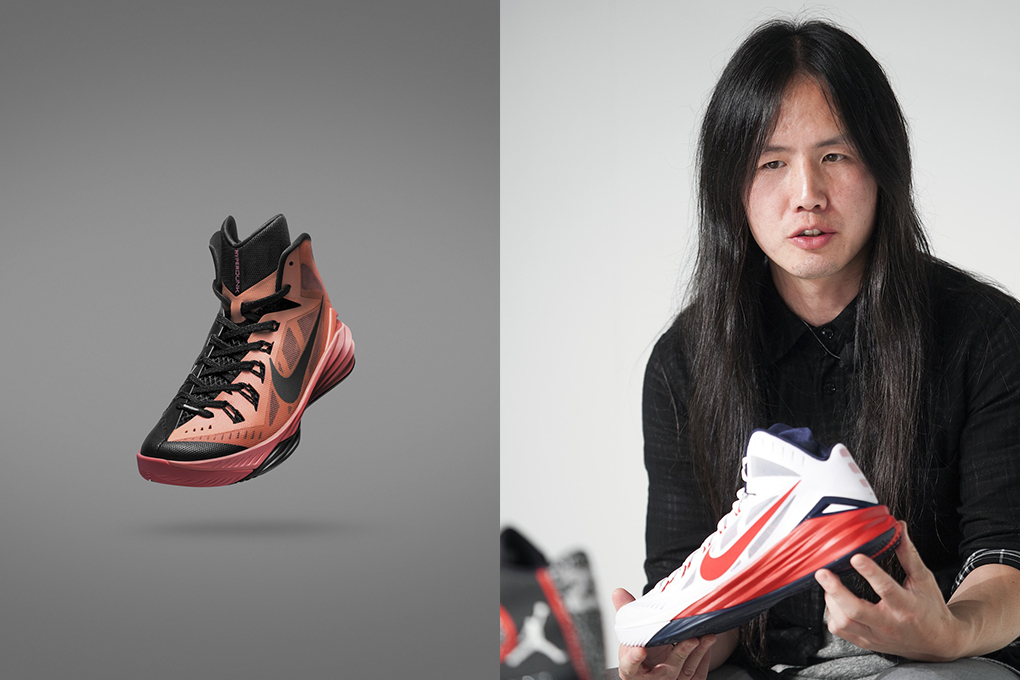 And you’re still using the Lunarlon technology on the outsole, which has been in place since 2012. Did you ever try Free Run technology on basketball shoes?

Free in itself started out as a strengthening tool. It made your foot stronger, because the flexibility and the range of motion you got certainly strengthened the muscles in the foot. I think the idea of Free and the smooth ride you get is really important and it definitely inspired, probably all of our shoes. Even the Lebron and Kobe’s. It was like how do we make this shoe feel so smooth and not clunky and slappy. And that’s the amazing stuff we’ve learned from Free.

What is it about the Lunarlon then that meets the demands and requirements of players?

It has a great softness with that cushioning. It’s also contained in a firmer shell around it. So that’s also nice because when you’re playing you sink in but then you’re stable with lateral movements.

And what’s the relation and capabilities when combined with the Dynamic Flywire and the Hyperfuse technology? Is that a perfect combination at this stage?

Yeah, I think so. Everything works. Like we talked about with the softness and the mesh’s in the upper. It just conforms and moves with your foot.

I felt like there was something different there and special. Just the ability to do things you’ve never done before because it’s thinner. It just bonded everything together. If the Hyperdunk 2014 was done in a leather synthetic overlay it was just be clunky and stiff. Now Hyperfuse just blurs everything together. Just even from a cosmetic aesthetic stand point, it allows you to do things you’ve never done before. 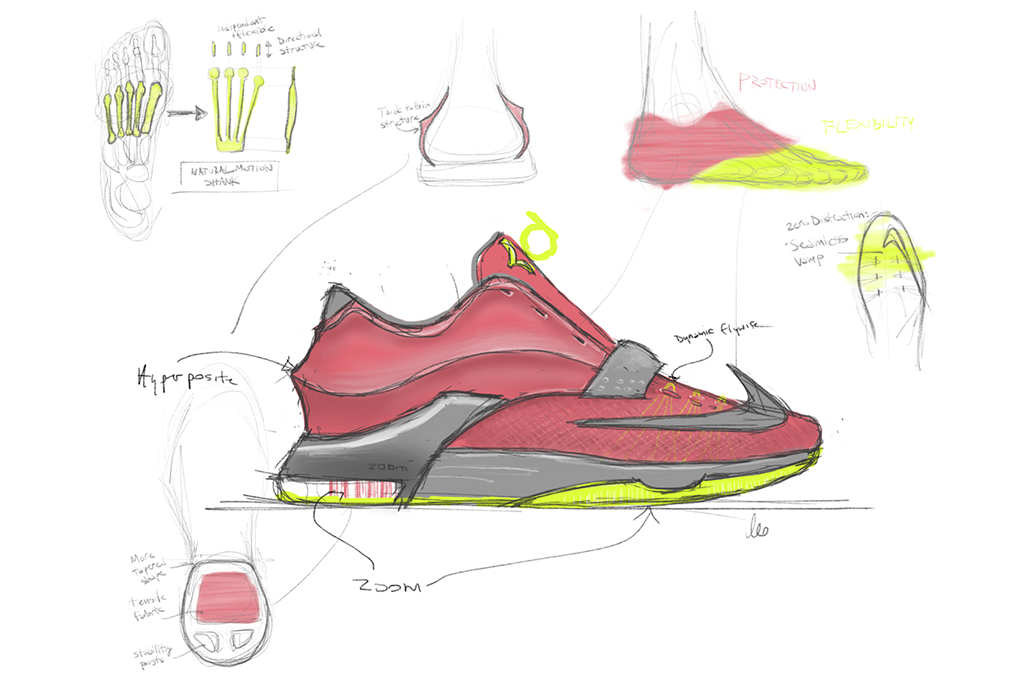 There must be a lot of excitement working closely with Kevin Durant on his signature shoe. But there must be a certain pleasure, as a designer, doing something that appeals to the mass audience that allows them to achieve their own goals. Could you elaborate on what the differences are and what it means to you to create the two?

When we work on a shoe like the Hyperdunk, it’s definitely really hard. You have to make it work for everybody. So that makes it really difficult. The other difficulty too is that you don’t have a signature athlete, so you don’t have a super sharp point. So, sometimes with the signature athlete they’re very specific. With Kobe, it was like “I want a low top.” If you just listen to the masses of people, they would of told you no. So that’s the other flip side and benefit of the signature, is that you have someone that will push something to another level.

Yeah, it pushes you as a designer too.

Exactly. There’s greats to both. It’s just different. Sometimes I think it’s good to have the ability to work on a signature shoe where it’s very focused and exactly what this person wants. And the other flip side is like, I have to think about everyone here. It just helps you look at the two ends of the spectrum.

KD’s are also great because they do work for a lot of people. We make sure that it’s not just his shoe but it’s a shoe for everyone. There are things he says that a lot of other players can benefit from. So, we wouldn’t just put something out there that is so specialised to his needs, because then no one else can really can get a piece of that. It’s important to balance the two.