Warning: "continue" targeting switch is equivalent to "break". Did you mean to use "continue 2"? in /nfs/c08/h04/mnt/122689/domains/thedailystreet.co.uk/html/wp-content/plugins/wp-author-box-pro/includes/ReduxFramework/ReduxCore/extensions/customizer/extension_customizer.php on line 442
 Interview: Alex Olson talks about joining Nike SB, starting Bianca Chandon and being inspired by Palace 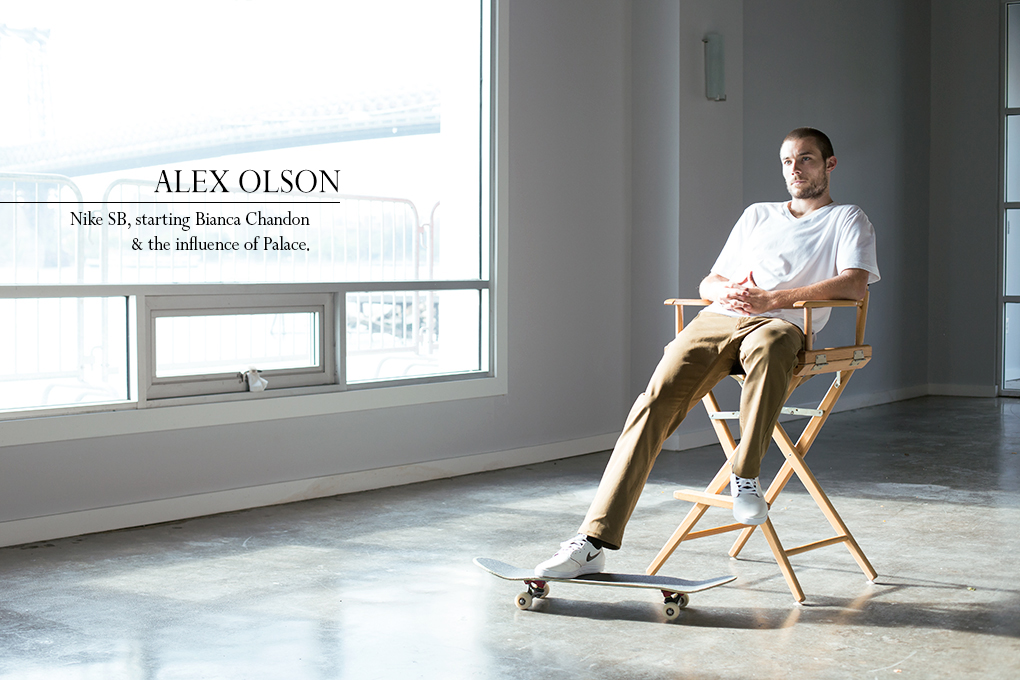 While in New York for the filming of the Nike SB Fit To Move lookbook we took some time out to sit down with Alex Olson to talk about joining Nike SB, his new brand Bianca Chandon, and how he’s been influenced by London’s own Palace Skateboards.

Alex Olson is a character, and an interesting one for sure, but that comes as no surprise when you learn that his dad is Steve Olson, a legendary skateboarder having turned pro as a teen in the ’70s, first team member for Independent Trucks, celebrated artist, the man supposedly responsible for introducing the checkerboard pattern to skate culture and seemingly having never grown up. Well, at some point during this life he had a son, an heir to his Peter Pan life and that son is Alex Olson. Alex has followed in his father’s footsteps and is showing the potential to be every part as influential as his father (which is a big statement), but in a very different way. Alex is by no means Punk, but there’s definitely something very Punk about his attitude and his honesty. He has no qualms with speaking his mind, regardless of who’s listening and who or what he’s talking about, and there’s something very refreshing about that. I’ve always admired people who have the courage to be honest about brands and people of importance, especially when that honesty could hinder your own career or growth. It’s this Punk honesty and attitude that’s lead Alex to go through shoe and deck sponsors much more so than most skaters, partly because he won’t put up with what he doesn’t like and partly because he doesn’t care for the potential consequences of upsetting people he works with. He wants to skate in his own way and to enjoy that, and it’s an admirable outlook.

Having read an interview with Alex from last year by Jenkem Mag where he was still in the early stages of planning his own brand, I was intrigued by how he spoke about Palace and “the small board movement” as he called it and how much it influenced him in starting Bianca Chandon. Although I was in New York interviewing Alex at the Nike SB lookbook shoot, and I was intrigued by his signing to a large footwear brand, having had problems with a lot of smaller footwear brands in the past, I had to probe about how a UK grass roots brand like Palace had inspired one of the coolest skaters in America with a strong connection to skateboarding that goes back way beyond his years to it’s very beginnings thanks to his father.

One thing I noticed very quickly about Alex, although he is a really nice and chilled guy, is that if a question doesn’t interest him, he simply won’t answer it and if he does, it will be as quick as he can without being rude. However, when you do manage to grab that interest, he answers with a raw passion that’s truly refreshing to hear. Thankfully for me, I managed to hit a few topics that got Alex talking and unsurprisingly it was the topics that were more related to ideals and movements, rather than his story or personal history … 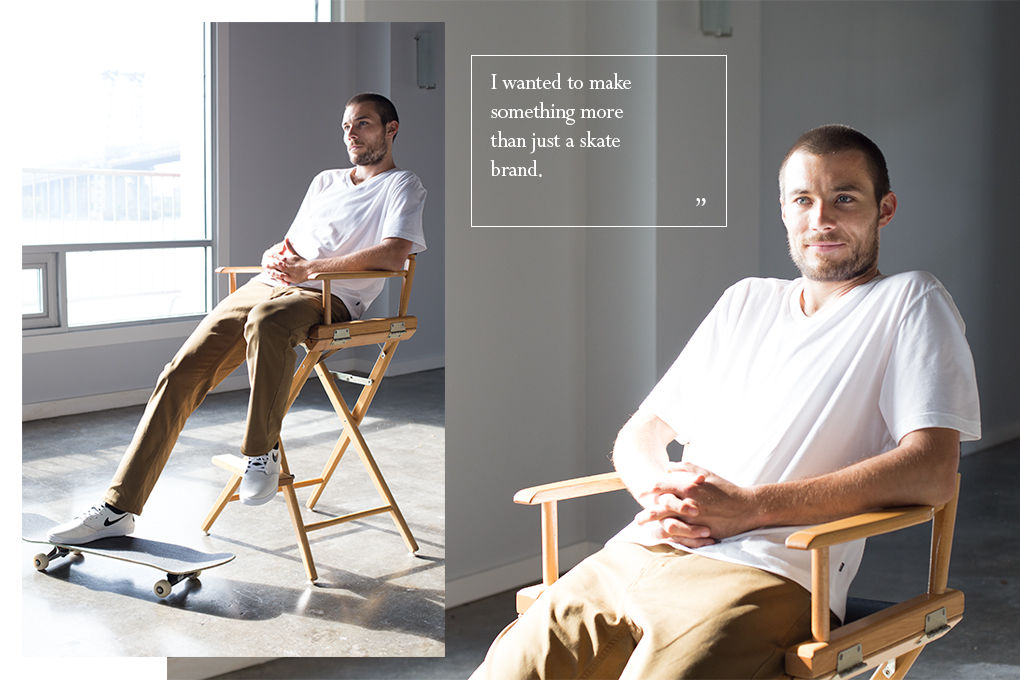 You’re one of the more recent signings to the Nike SB team. Having had a rocky history with footwear sponsors in the past, do you feel you’ve found your home at Nike?

Yeah definitely. I definitely feel much more myself and I can express myself and be who I am without getting hassled I guess. Previous companies weren’t as lenient… I guess.

In what way does riding for Nike SB differ from other more traditional skate brands then?

I dunno, just a lot looser I guess. It’s not as demanding I guess? I’m not sure. I don’t really know how to answer that. The other companies are a little more strict.

What shoes are you riding in mostly at the moment?

They’re called Bruins. They’re an old ‘70s shoe that they re-did for skating.

Will we be seeing a pro model on Nike SB from yourself any time soon? Is that something you’re interested in?

I’m definitely interested! But no, I don’t think so. I mean, there hasn’t been talk of it, so no.

Tell us more about your brand Bianca Chandon and why you decided to start your own thing?

Umm I was just kind of bored of everything that was out there and I was kind of just bored in general and I didn’t like anything. I needed some type of inspiration and that was kind of the best solution to do it. I wanted to make something more than just a skate brand and try to do something different.

Talking about doing stuff differently, some of the first stuff you put out wasn’t even branded. You leaked the name out right? Why?

Yeah, it was a phone number originally because I thought the name was going to be a little weird for kids, so instead I was like “Oh, let’s put a phone number behind it so the answer machine will just say someone’s name and then you kind of won’t know what it means”, but the name’s been out there the longest. You’ve been hearing the name, but you don’t know what it is. So I said “Call the number. Call the number”. Very few people got it, but that was the whole plan. And it was also to build up time to get product and other stuff.

And it worked [laughs].

Before you started Bianca Chandon you mentioned wanting to do something like the Palace guys. What was it about Palace that caught your attention and inspired you?

Yeah, those were a big big inspiration. They didn’t have a big pro team, it wasn’t the best of the best, it was just their friends that they were sponsoring and they were just making stuff for their friends basically. The fact that it wasn’t the hardest skating – it definitely had a strong art direction and it was just different. They were filming on VHS instead of HD cameras and it just had a very unique and good vibe, so I was just drawn to it and really liked what they were doing. I wanted to do something like that.

Do you think you’ve managed to achieve that in Bianca Chandon so far?

Umm yes and no. I dunno. A little bit. Parts of it, yes, but other parts, no. They have a crew of people, I am just myself, or by myself [laughs]. 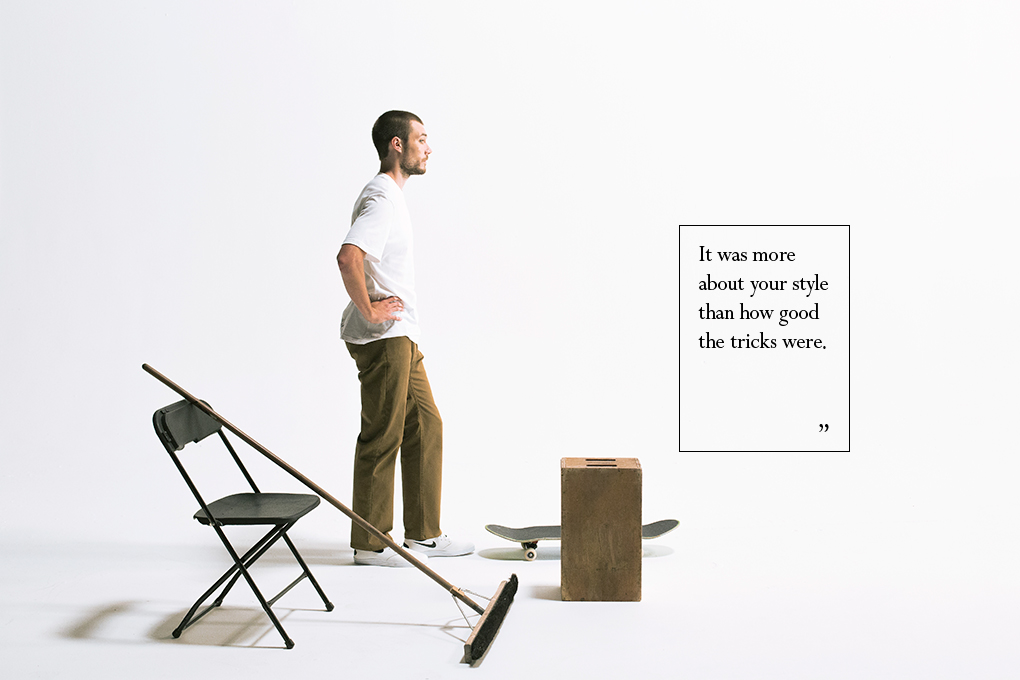 Is that always going to be the plan, going it alone? Or will you be signing a team?

See how it goes. But I really admired Palace in the beginning, so much. Because they do stuff with Theo Parrish, doing a record, and I wanted to do stuff like that. We had very similar taste in a lot of things and I liked the fact they they’re considered a fashion brand. I like how they’re at Dover Street and that they’re more than just a skate brand. That’s why I like them and admire them a lot.

On that note, you’ve often said in the past that you want Bianca Chandon to attract people from all sides, not just skaters. Why is that mix so important to you?

Umm because I think in the early ‘90s, from what I’ve talked to people about and what I’ve gathered is, a lot of skateboarders in the ‘90s were really attracted by skateboarding and all the things that came with it and all the interest that professional skaters brought to the table. That kind of disappeared and it was very focused on just skateboarding and I just hated that and I thought that it should reflect more because these people have more to offer. It just seemed necessary.

Do you think that in recent years skating has hit a point of technical saturation? Going almost towards becoming a commercial sport?

Yeah. I think skateboarding and how our peers judge it is more on a dance basis where it’s form and style, and it’s how you do it not how hard it is. That kind of got lost. Like in ballet, I think, I don’t know much about ballet, but it’s more on your technique and your form of how you hold your positions and I think a lot of people lost that. In the ‘80s it was more about your style than how good the tricks were, but it was more limited with the trick selection [laughs], but I think it lost that in skateboarding.

Is it important that skateboarding refunds that for it’s future?