Warning: "continue" targeting switch is equivalent to "break". Did you mean to use "continue 2"? in /nfs/c08/h04/mnt/122689/domains/thedailystreet.co.uk/html/wp-content/plugins/wp-author-box-pro/includes/ReduxFramework/ReduxCore/extensions/customizer/extension_customizer.php on line 442
 Interview: Christopher Arena (NBA) & David Cho (adidas) on designing the 2015 NBA All-Star uniforms Those who follow the NBA basketball season will be aware that the 2015 All-Star game uniforms were announced today. We spoke with Christopher Arena, NBA Vice President of Apparel, Sporting Goods & Basketball Partnerships, and David Cho, NBA Partnership Director at adidas, about designing this season’s uniforms.

If you haven’t seen them already, you can check out the uniform’s here. If you’re not familiar with basketball and the All-Star game, let me sum it up for you quickly. The All-Star game first  took place in 1951 at the Boston Garden and has continued to be a regular part of the season on All-Star weekend. Once a year, the best players from the Western Conference team up to play the best players from the Eastern Conference. The starting lineup is actually selected by a fan ballot, with the reserves are selected by a vote among the head coaches from each conference. I won’t go into a huge depth of detail on the game and it’s history, or the quirks like the ‘Riley Rule’. I’ll let those of you who are interested go and do some digging on the topic.

As the build up for this season’s All-Star game starts to gain traction, we took some time to speak to two of the most influential people in the sport, or at least as far as the uniforms are concerned, about the 2015 All-Star uniforms and how the NBA and adidas work together in order to manufacture uniforms for 30 NBA teams, as well as the special games such as the All-Star and Christmas Day games … 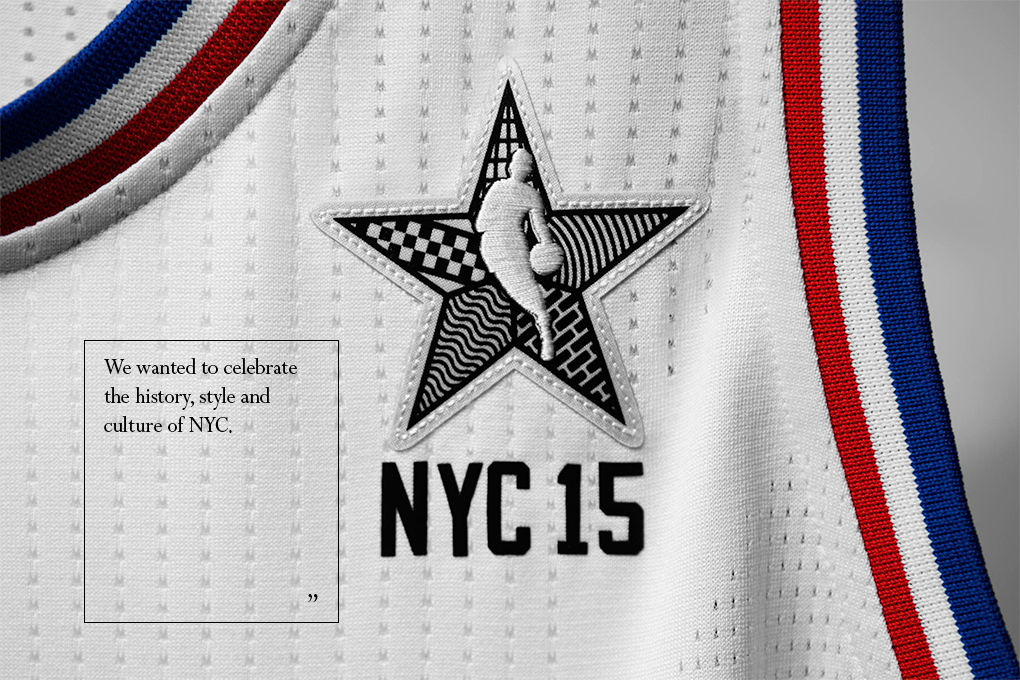 Can you introduce yourself and tell us what you do at the NBA and Adidas respectively?

Christopher: Yeah sure, so I’m Christopher Arena, I’m Head of Identity, Outfitting and Equipment for the merchandising group and in summary that’s all the things that appear on the court from the uniforms, basketballs to the backboard and the design inspiration of all the above.

David: David Cho, I’m Director of our global NBA partnership at Adidas. I manage all elements of our partnership with the NBA, from what the players wear on the court to our retail licenses both in the US and globally.

NBA outfits recently gained a gold marker on them to signify their championship winning team, where did the inspiration for this come from?

C: It’s exactly related to the All-Star game, where in 2006 the players jackets featured the previous All-Star logos of the games the players had played in. So for example Shaquille O’Neal, who had 15 or 16 appearances, had each logo of the previous All-Star games he was in signified by a patch on his jacket. So, from then onwards the All-Star jackets have represented player accomplishments, whether this is appearances, M.V.P. wins, R.O.Y. wins, All-Star M.V.P. wins or Slam Dunk Championship wins etc.

What we had never done was take team accomplishments and put those on the regular season jerseys or warm-up suits in any way, shape or form. We wanted to start with the jerseys as a way to celebrate championships because that’s the most obvious thing to celebrate. We wanted to do that a) with the colour gold because that’s the colour of our championship and b) in a place where you could see it from both inside and outside. When the player approaches his locker and has his jersey hanging up, he can see the trophy there and when he wears it he’ll see it on the outside as well. It is in a central, subtle place that doesn’t hide the team brand and certainly in a good place where it would be identified and recognisable.

C: Well at the end of the day this is a sport played at the highest level and it is about competing to win. Each team and each player starts out with that goal at the start of the season; everyone starts at zero-zero and the goal is to make the play-offs and win the championship. There’s a pride that teams have in winning championships, whether it be 1, 2, 3 or 17 like the Boston Celtics. If you have it you want to show that you have it, if you don’t, you want to get one. So we just think that a championship is the highest level that you can play at and should be celebrated.

Talk us through the New York City inspirations behind the design of the 2015 All-Star kit? How did you approach representing the host city?

D: We wanted to celebrate the history, style and culture of NYC so we went literally from the beginning of the 20th century and went back to the central look of the jersey, which is just a number and we brought it to modern day New York and the history of the boroughs. If you look at the jersey, you see the different stars; each one represents one of the 5 boroughs of NY. One of them is Queens, so you see the grid patterns and that’s from the structures that you see in Queens outside Flushing Meadows. The wave pattern is for Staten Island, the checked pattern is for the taxi checked pattern for Manhattan and the bridge is for the Brooklyn. This was a fun project where you have the stars and you notice that it has 5 points and NY has the 5 boroughs. We knew this was going to be a focal point for the uniform and the logo for this current event. It was a really fun project coming up with the graphic design elements of all the boroughs.

This is the first time in an All-star game that both first and last names are being included on the jersey. What’s the thinking behind it and will we see more of this in the future?

C: It’s the first season that on Christmas day we’re putting first names on the back of the jersey, so it’s a springboard to both first and last names on the jersey for the All-Star game. It’s a unique, different way to celebrate the player. For the warm-up jackets, we’re going to have the player’s previous All-Star games represented through stars on the left chest and his last name will be on the jacket, and then on the left sleeve will be his individual accomplishments, whether it be M.V.P., R.O.Y. or if he has a championship. The last name will be on the jacket and first and last name on the jersey. 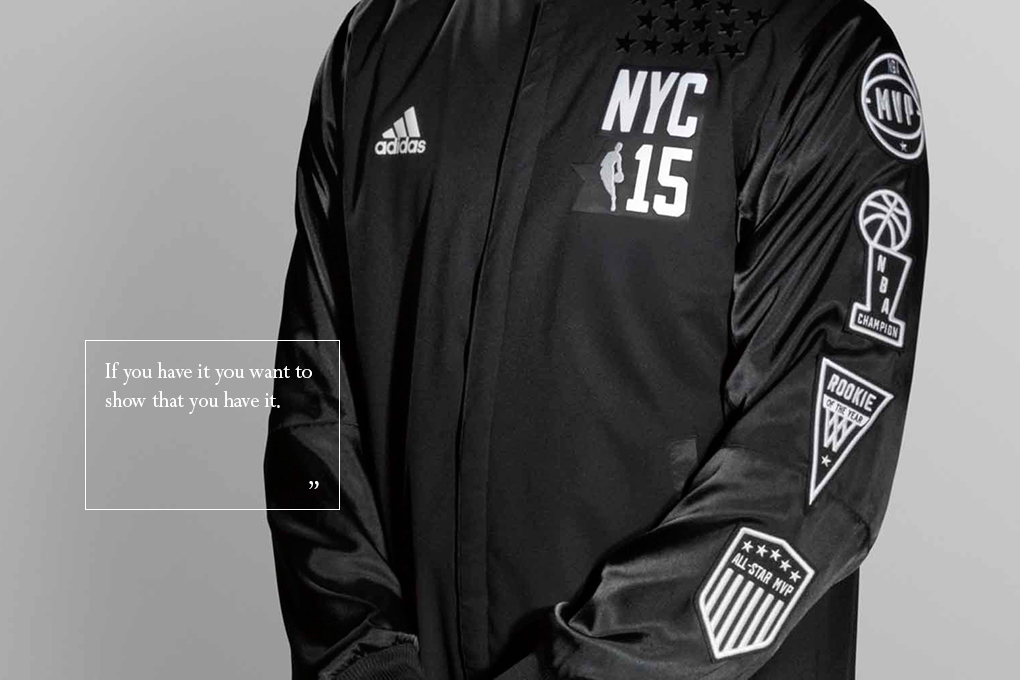 C: It’s a great opportunity, and it’s how we show whether we are in New Orleans, like last year, or NYC this year. We look for the original elements, look for elements of the teams and look for anything we can use as a springboard to create an entire collection, not just what you see on court but what you can purchase through the retail collection.

How important is it to design a jersey for these special games that appeals to fans off the court as well as to the players?

D: The All-Star uniforms are always going to be different to what the player wears every day to represent his team, so in that sense it’s going to be unique to him. The challenge always comes when a player has been an All-Star 2, 3, 4, a dozen times and we try to create something special for him – each time you make the team it’s an accomplishment, regardless of if it’s your 1st or 17th appearance like Kobe Bryant. So, our opportunity there is to make it unique to the player and to represent the city in some way, and maybe with the absence of the year on the uniform, you get a sense of what that city represents. If you do those two things the fans will gravitate towards it because a) they are a fan of the player and want to show their support for them or b) they were at the event or are from the host city and want to acknowledge this in some way.

Do you try and tie in the design of special kits like this and the Christmas Day kit with the general aesthetics for the league season or do you aim to keep them separate?

D: The Christmas Day game hasn’t got a history – logo and first name. All-Star is more a celebration for the individual city, and while there are similar elements that are used because we are thinking about them or because they work with the player or a fan, there is no conscious effort to link the two programmes every year.

Lastly, I want to talk about the working relationship between adidas and the NBA. When it comes to designing team kits, how much of the process is collaborative? You’re both huge global entities in sports, how do you manage that relationship?

D: For the team kit, it really starts with the team, so there’s an application process and a design and fashion process that covers about two years and through that process the teams really have a choice. In terms of design creation, they may choose to use their internal design staff or an outside agency or adidas, but that’s up to them. At some point during the uniform process, adidas is integrated because they are the manufacturer of everything on the court; they are the experts in terms of engineering any types of performance benefits in the uniform. If a team wants to do something that isn’t the norm, or something that is more challenging in terms of maximising that jersey at retail, then we have to integrate adidas at some point. No matter how they start or where they start; new ownership, new arena, change of culture, whatever it maybe, we ask them to go through a 3 or 4 month design process and then adidas will come into that process and really perfect what the team thinks in terms of performance on the court.

Will we ever see the 3 stripes on NBA on-court jerseys, like we do on football jerseys or is it a no-go territory?