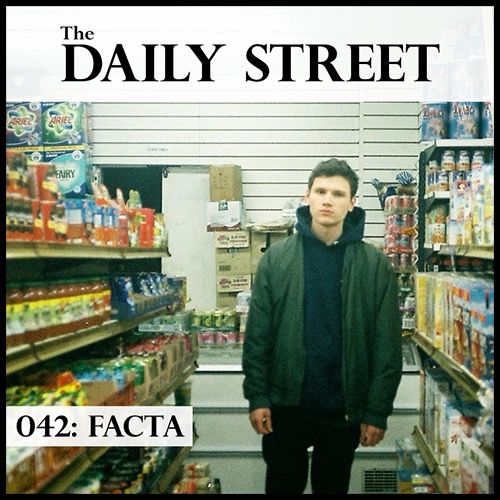 Our mixtape series is back with a bang as Facta provides us with a weighty dose of selection in TDS Mix 042.

Bristol is a place where we here at The Daily Street continue to find ourselves grazing when roaming the current crop of underground music. The wealthy continuum of talent has secured our attention since our beginnings and once again we’re back with the focus on a resident of the city for our current mixtape, honing our appreciation on the highly skilled Facta.

An artist who has been bubbling in the scene for a couple of years and had a fairly eventful 2014 releasing on a number of imprints, as well as starting his own imprint ‘Wisdom Teeth’ with K-Lone. The label has recently dropped its second release, a killer double A sided affair from two relentless producers Hodge and Acre.

Facta’s sound boasts influence from different corners of the UK underground, but at the same time finds itself unashamedly fitting into a musical path that treads one foot into the realms of House and Techno and the other in a primitive Dubstep sound, a firm continuation of the influence that Bristol’s bassweighted soundsystem culture has on its habitants.

The mixtape we are blessed with comes with an onslaught of exclusive and unreleased dubs from Facta and his fellow Bristol cohabitants. It’s more than a solid submission for our mixtape series – it’s up there with some of the best.

TDS MIX 042: Facta by The Daily Street on Mixcloud