Warning: "continue" targeting switch is equivalent to "break". Did you mean to use "continue 2"? in /nfs/c08/h04/mnt/122689/domains/thedailystreet.co.uk/html/wp-content/plugins/wp-author-box-pro/includes/ReduxFramework/ReduxCore/extensions/customizer/extension_customizer.php on line 442
 Top 10 Nike Air Huarache sneakers that aren't the Huarache LE 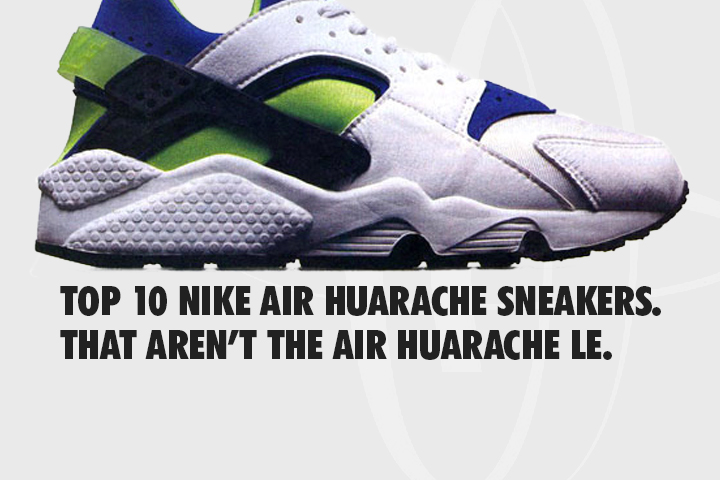 It’s Huarache era. It doesn’t take a sneaker specialist to be able to tell you that. While the Huarache LE has become the Shuffler’s shoe of choice, we take a look at 10 other Nike Air Huarache silhouettes that deserve some attention.

The Huarache brand is one of Nike’s (and Tinker’s) more interesting creations. Up until recently, it remained an adventurous playground for those with a more brave taste for design and sneakers, a safety zone for the technology-obsessed sneaker lover who wanted to differentiate themselves from the norm. Today, the Air Huarache Le has become the polar opposite: a shining beacon for the average joe, equipped with an excessive amount of grooming, tanning and strange dance moves.

So, the Air Huarache LE has found itself back on the shelves for a lot of collectors, patiently kept on ice until enough time has passed that the Huarache Hype has not only died down, but become a distant memory. In other words, when life goes back to normal. Don’t shed a tear though, there’s still plenty of Huarache silhouettes that would still be deemed “crazy”, “ugly” or “a bit too out-there” in that beautifully ugly way that the Huarache is king of. Let’s be honest, a large part of the charm of the Huarache line has always been that it looks like some form of crazy space shoe from the future of the past, not that it’s current. 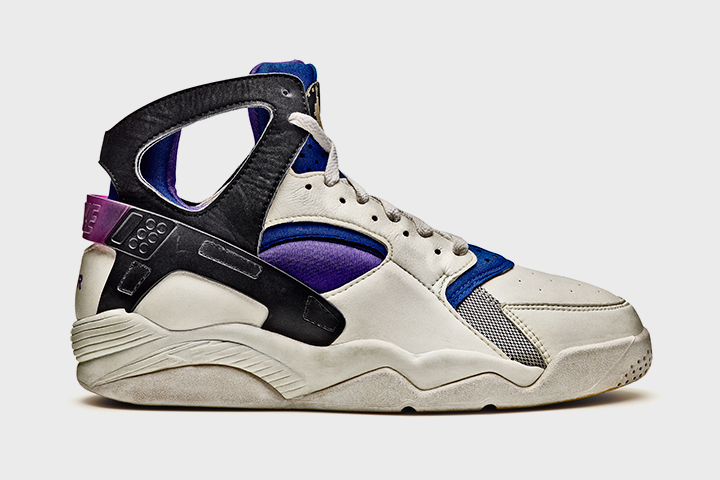 First up is the Nike Air Flight Huarache designed by a team at Nike led by Tinker Hatfield and including Eric Avar – a quick follow up from the original Air Huarache LE in 1991. An important part of Huarache history as it marks the beginning of the Huarache journey into categories outside of running, something that became a significant part of the brand.

The shoe was revolutionary for Nike Basketball at the time and still holds an air of futurism today. The large window panels around the ankle give this classic it’s unique charm, very similar to the Nike Air Direct Flight also released in 1992. 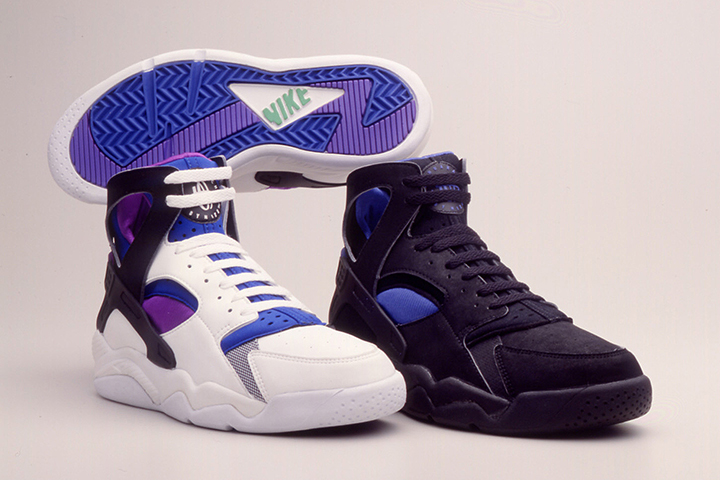 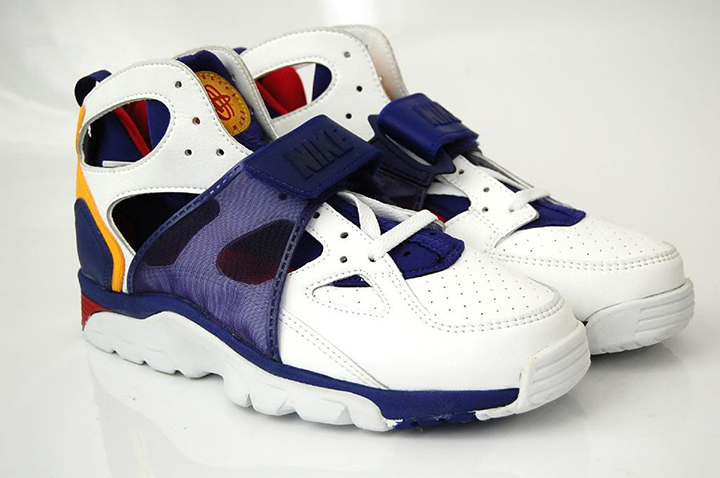 We’re still in 1992 with the Nike Air Trainer Huarache, another diversification for the Huarache brand, taking the innovation into arguably it’s most productive category; training. For me, although not usually a training sneaker fan, the Huarache training shoes were top class and some of the best from the Huarache camp.

This specific model of the Air Trainer Huarache took those beloved window panels on the Air Flight Huarache even further. More holes! However, it’s the mesh strap that sticks in the memory for this one. Just one detail, but what a detail it is. 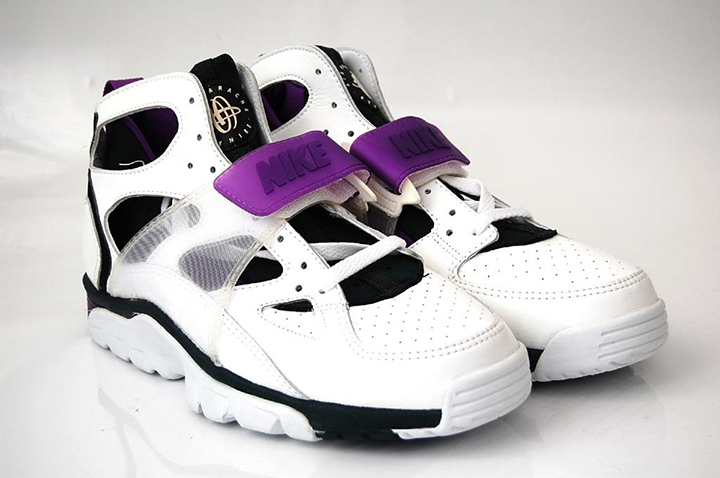 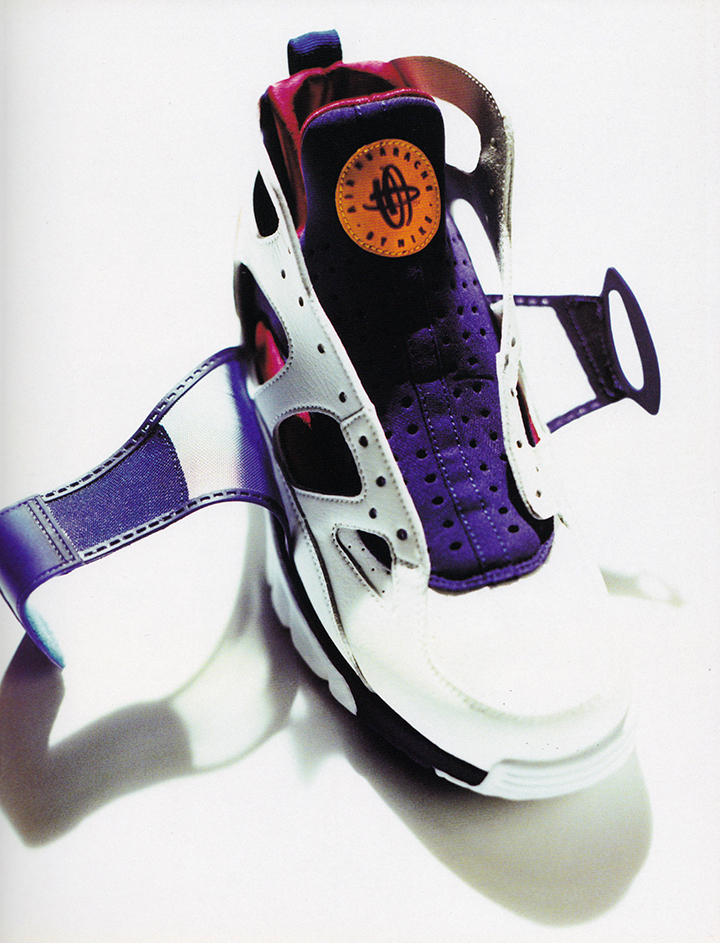 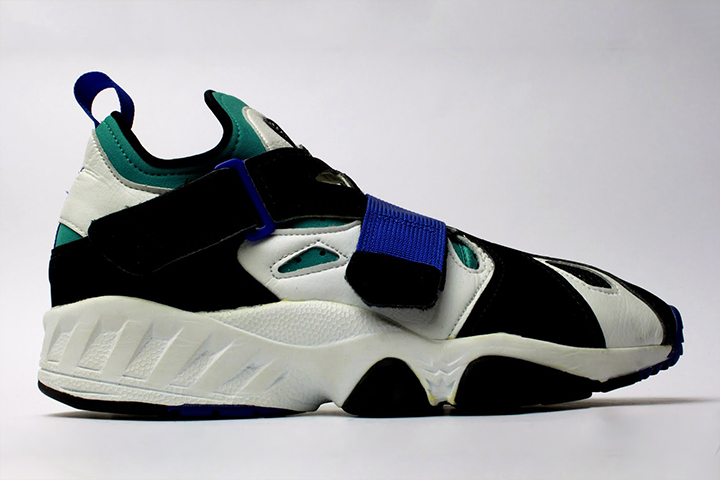 Finally moving away from 1992, skipping past a few other category diversifications (tennis), a few more basketball numbers and the much loved Huarache Light (I couldn’t fit everything in this list), we find ourselves in 1994 looking at the Air Trainer Huarache once again.

It’s only a 2 year gap, but this shoe is vastly different from its predecessor. The main focus seems to have been that beloved strap from 1992, taking it to a whole new level. This shoe really embodies the ugly charm of the mid-1990s and Huarache. As expected with any Huarache sneaker, this one came in some killer colourways. 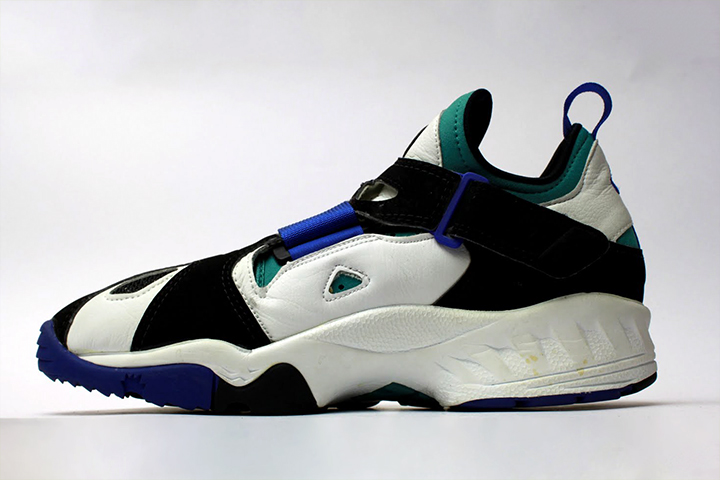 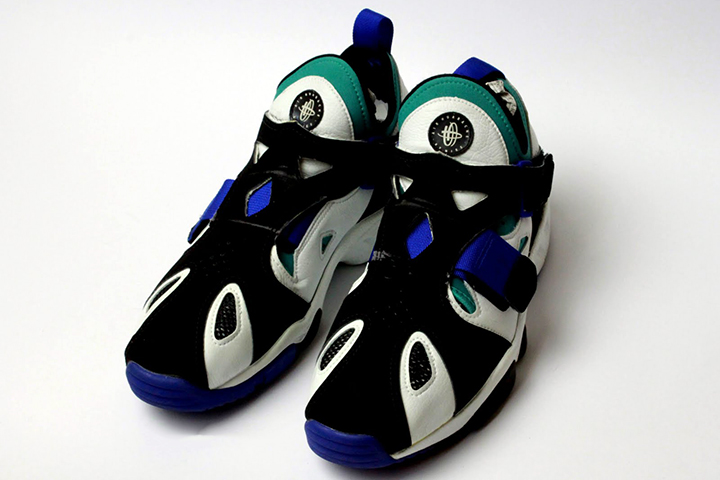 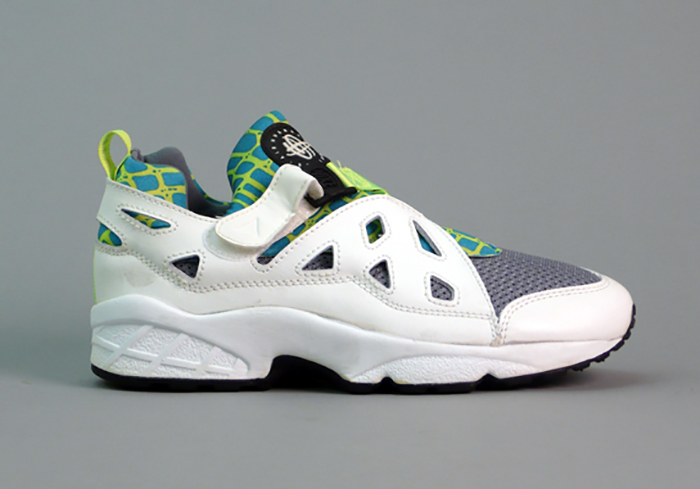 1994 was a good year for low top Huarache shoes. The Nike Air Huarache Plus was very similar in style to the Air Trainer Huarache ’94, and you’d be excused for mistaking them at first glance on the street (just), but they’re different enough.

A little less strap on this one, but still a great use of it. The patterns on the upper, teamed with the leather and mesh, make this shoe what it is. It’s on the verge of acceptable, but that’s what makes it so damn great! When worn well, these are guaranteed neck breakers. 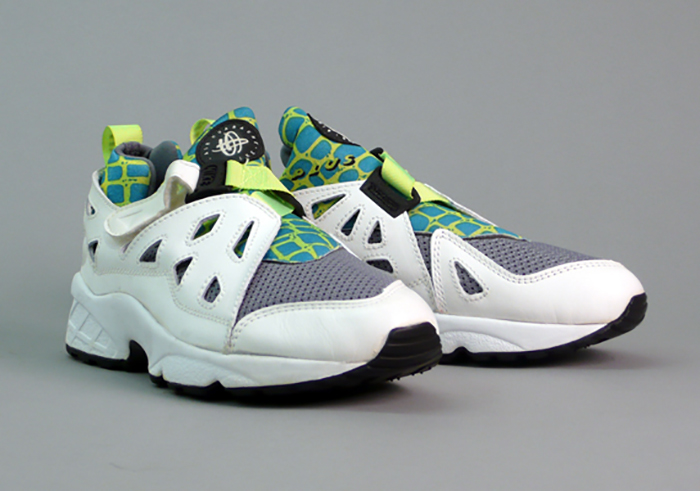 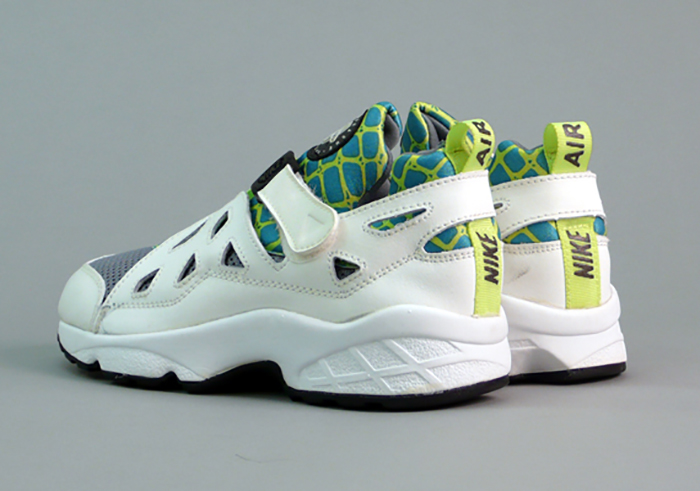 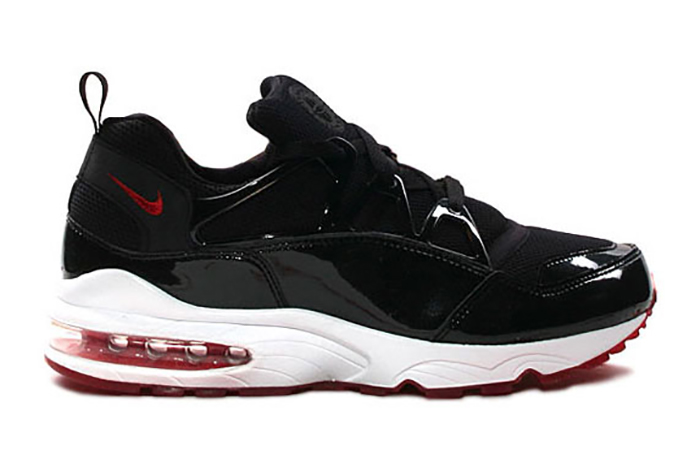 Now, we skipped over the Air Huarache Light earlier, which I’m ashamed about because it’s one of my favourites, but I chose this hybrid over the original. Controversial, perhaps, but I don’t care. Every now and then a hybrid tops the original. Maybe if they hadn’t gone gloss on the leather, then this would be a clear winner. 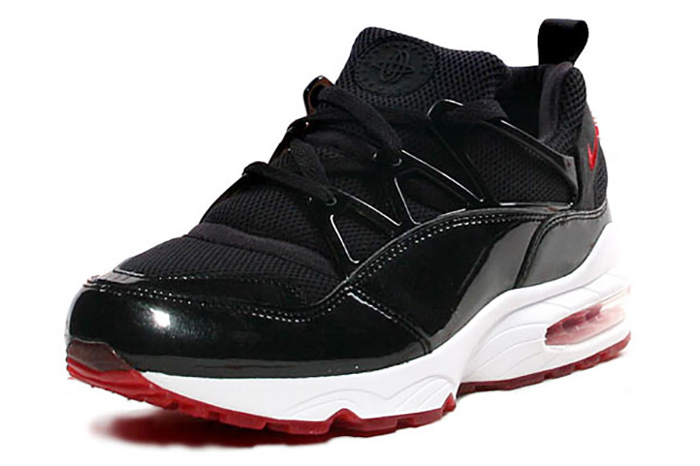 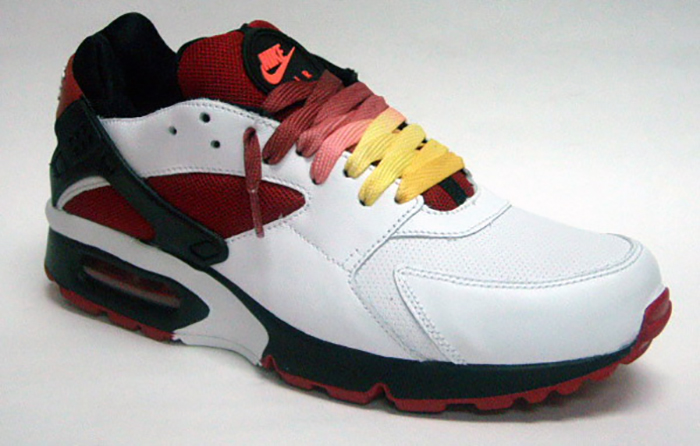 Another hybrid makes the list! This time it’s the lesser known mashup between the Air Huarache LE and the Air Max BW; the Nike B Huarache.

This one seemed to come and go with little to no attention. The Air Max BW is a British icon and what with all the Huarache love of late, I think we’re overdue this hybrid making a return. Hopefully they’ll keep to the all leather makeup that makes this shoe what it is, that and those tantalising colour fade laces. 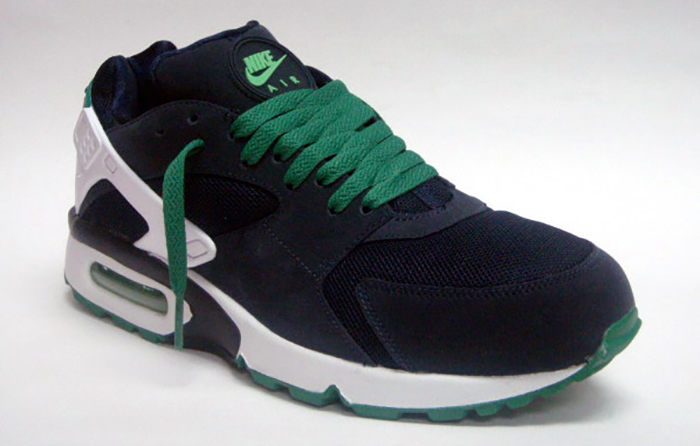 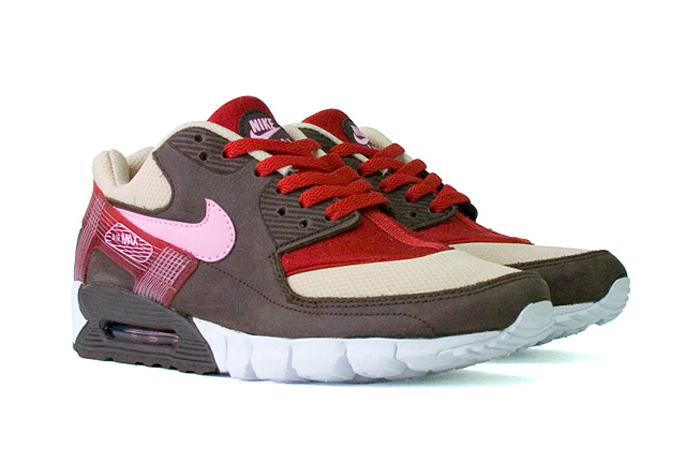 OK, so the hybrids are having a real moment right now, but hey, there was a large period in the ’00s where hybrids where the only place you’d find the Huarache innovation.

The Air Max 90 Current Huarache went down a treat when it dropped in 2009 and is still a regular on peoples feet and on Instagram. It was just done so well! The mixture of those comfortable Huarache materials with the bulk of an Air Max 90 was  a powerful move from the Swoosh. Some big collaborations on this model didn’t hurt either. 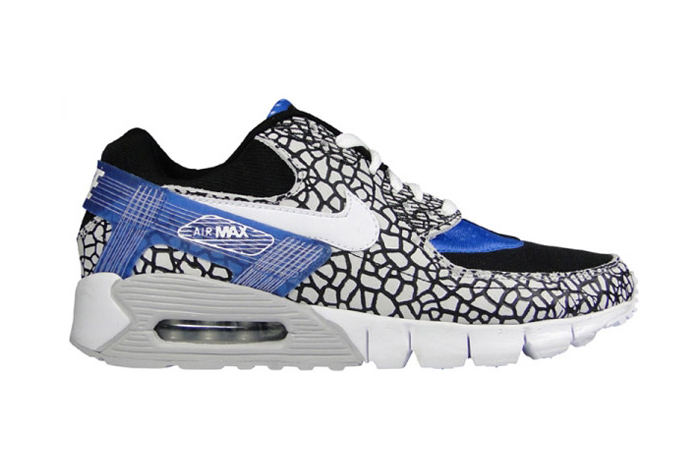 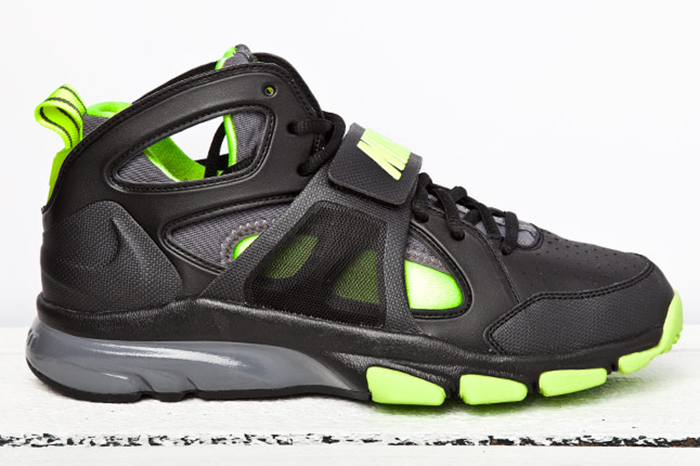 The Nike Zoom Huarache TR Mid debuted in 2010 and although technically another rendition of the Air Trainer Huarache, found itself becoming a firm favourite in the NFL. This shoe is very much a modern take on the classic from 1992, including that awesome mesh strap, but with a bit more attitude and substance thanks to modern materials and manufacturing. Unfortunately, it also has that ‘plasticy’ quality that a lot of Nike shoes around this era had, but the shape and style is there with a lot of potential.

This sneaker came in some moody colourways, putting to us a selection of neon colours for accents over blacks and greys. There was a really nice Navy/White colourway that was a lot more subtle and wearable. Later on the Zoom Huarache TR Mid 2 would tweak this design and remove the strap… not impressed. 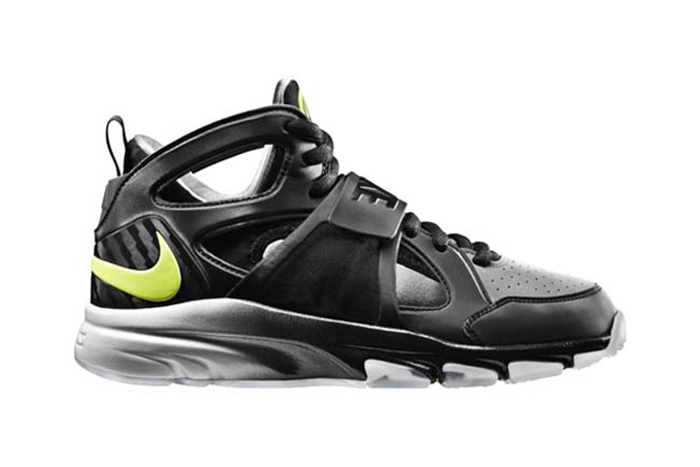 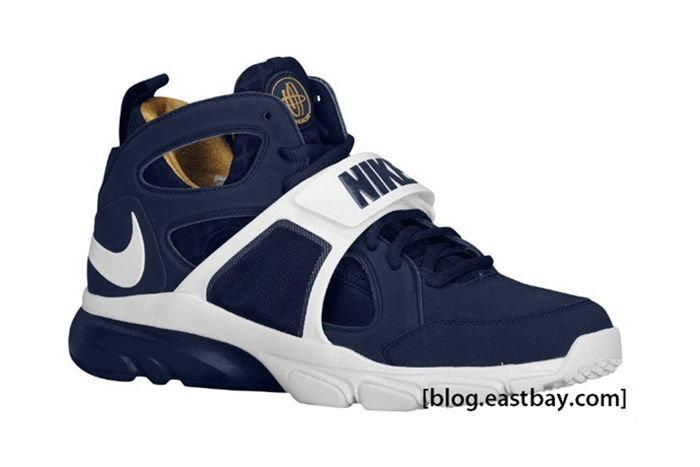 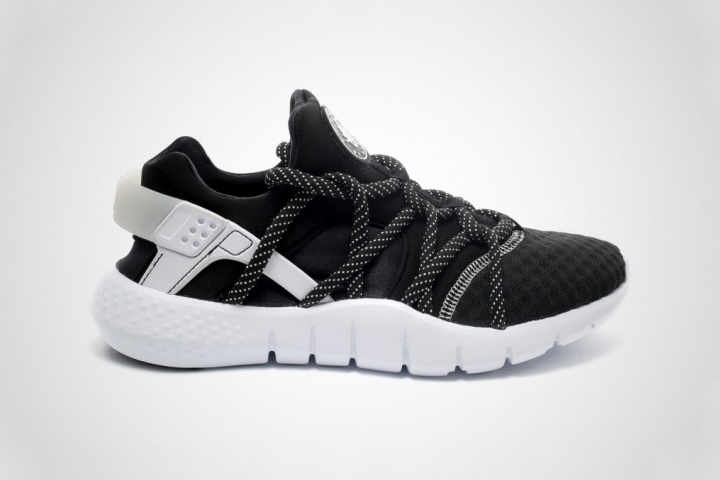 I’ve really come around to the Nike Air Huarache NM aka the Air Huarache 2015. I know it’s a bit ridiculous because it’s 100% a style shoe, but that raises a good point. The last 2 shoes on this list are both new designs purely for style…

Anyway, the Air Huarache NM does look good on and it is a nice alternative to the Huarache LE, although for me, the Huarache Trainer Low 2015 is the best new Huarache for a while, not that it can really be classed as new. 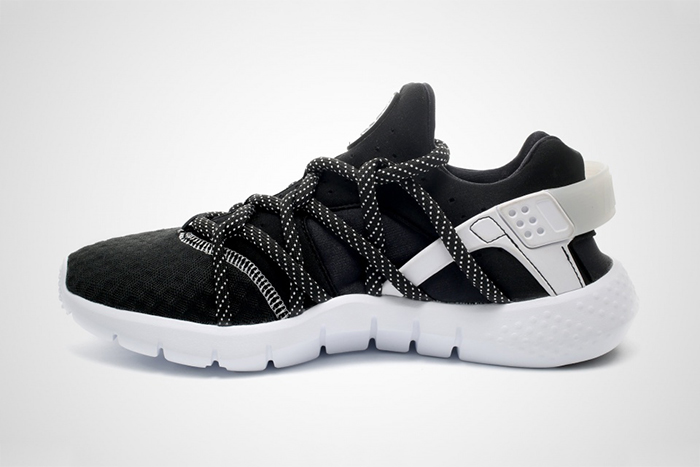 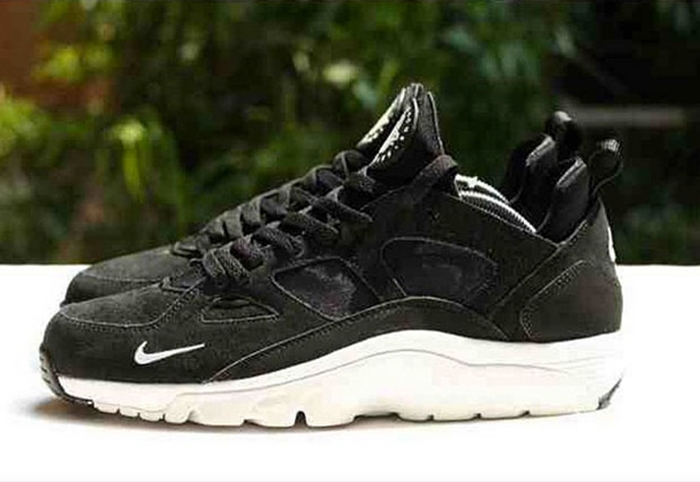 Yes, another Huarache training shoe. I warned you earlier.

This time it’s the forthcoming 2015 retro-style concept of the Huarache Trainer Low. Interestingly, this silhouette is a retro concept based on the original Air Trainer Huarache of 1992, as well as the Zoom Huarache TR Low of 2011, but with some of its own character thrown in the mix, such as that awesome mini Swoosh. I’m biased to a good mini Swoosh on the forefoot, but these are really good regardless, especially in black suede.

We’ll see where Nike go with this one. The 2011 Zoom Huarache TR Low found its home in boxing, but this shoe looks more like a bulky mid ’90s walking shoe, not that Nike intended this to actually be used in any sporting category.