Warning: "continue" targeting switch is equivalent to "break". Did you mean to use "continue 2"? in /nfs/c08/h04/mnt/122689/domains/thedailystreet.co.uk/html/wp-content/plugins/wp-author-box-pro/includes/ReduxFramework/ReduxCore/extensions/customizer/extension_customizer.php on line 442
 Interview: Rudy Gay talks about being on the transfer block and collecting sneakers 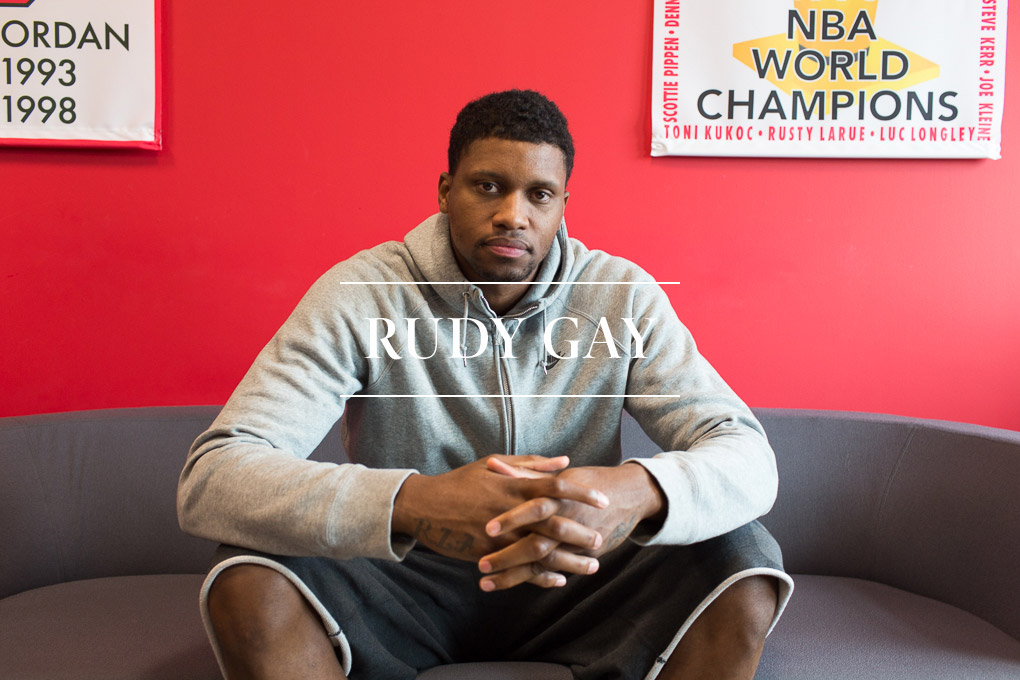 With the announcement of Rudy Gay being put on the transfer block hitting the internet less that 24 hours before we sat down with him, it was an interesting time to talk to one of the best known Small Forwards in the NBA.

It’s always puzzled me how far American sportsmen have to travel for games. In all honesty, I’m not sure how they do it. It puzzles me even further to think about how easily they are transferred from team to team, equating to a large relocation of their life from state to state. It’s something that I wanted to ask Rudy anyway, but it became even more poignant with the announcement of his possible transfer. The internet has calmed down a little since then, with the focus moving to Rudy’s friend Rajon Rondo. Who knows, with the current focus on recruiting Rondo, a good friend of his, it looks like Rudy’s future at the Sacramento Kings just gained a new perspective.

It’s a complicated and uncertain situation, but that’s what I was getting at when I said it puzzled me. How do you not let the above get inside your head?

Outside of the details of a career in the NBA, Rudy is an avid sneaker collector, so this was obviously a topic I had to explore, especially after learning about his DIY sneaker giveaway on Twitter back in 2011. I’d noticed in that famed picture of a mess of sneakers on the floor that he had an abnormal appreciation of running sneakers. Not abnormal for most people reading this blog, as we Europeans are very pro-running sneakers, but abnormal for a basketball player, and I like that a lot.

Regardless of the possibility of being transferred, Rudy couldn’t have been more calm. Maybe it was the jet lag, maybe it was that pre-first-coffee-of-the-day state of mind, but I get the feeling it was just his character. Calm, relaxed and friendly. Whatever happens by the end of the transfer window, we wish you all the best Rudy Gay. 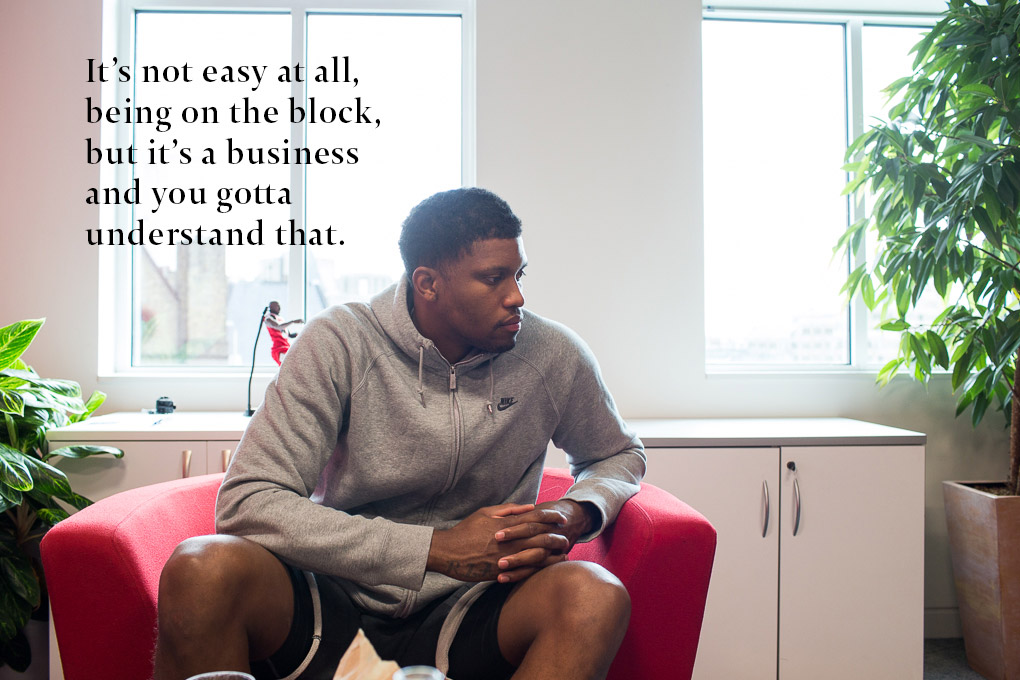 Have you been to London before?

Yes. I came over here with my college and we played the Brighton Bears. We scrimmaged against them. I believe we played them in Brixton maybe? It was pretty cool.

What do you think of it over here?

Glad to hear it. It’s hard not to notice all of the buzz about you being on the trading block at the moment. What’s it like having an important part of you career so out of your control?

Yeah. I’ve been a part of it before and it’s tough. It’s not easy at all, being on the block, but it’s a business and you gotta understand that. As much as you think everything is ok, it never is.

Does that ever play on you at all?

It’s just part of the package. That’s how I feel. You honestly never know. You just got to go out there and play hard every night. Anything else is gonna happen.

To us, with the UK being tiny in comparison to America, the idea of being relocated over such a distance is crazy.

It is! Last time I went from Toronto to Sacramento, which is across the country, so that’s a long way. There’s a lot of adjustments that go into it. Just having to do it is crazy.

I guess you guys travel a lot for games though, regardless of who you play for.

Moving away from basketball briefly, you’ve got quite the collection of sneakers right?

Do you mainly collect through getting shoes to play in or do you actively collect off the court as well?

I actively collect. I was always a sneaker guy, even growing up. It was one of those things you couldn’t afford, so as soon as I could I went back and got all the shoes I couldn’t afford.

Which ones were high on that list to go back and get?

Well most of the Jordans. Back then they were so expensive! So now, especially with the rereleases, I try to get as many as I can.

Yeah, I did, I did. It was a giveaway. People asked questions that I answered and I gave them shoes. It was fun.

Being a Nike Basketball athlete you get a lot of your own PEs. Will we see a Rudy Gay signature line in the future?

I don’t know. Maybe. I had a couple shoes, but I would really rather be on the design side. I’m into that kinda thing. I’d rather on the other end, designing shoes, and try to help Nike with something.

Have you met many of the designers at Nike?

Yeah, I’ve met a lot of them actually, just being a part, going to campus and talking to them.

Have you ever played with designing shoes in your spare time then?

No. Obviously, when I have time, I’ll go and spend a little bit more time with the designers and see exactly what I could do, but I think I’ll do it in the future.

Out of interest, because it sounds like you’ve given this topic some thought in the past, what innovation would you put into a shoe if you got the call from Nike today?

What sort of tech? I don’t know. Certain things. I’m kind of a high top guy so I’d probably integrate that into whatever I do. I like low tops, but I think high tops are more fashionable, especially right now, so whatever I do it would probably be a high top shoe.

With that in mind, I’m interested that you’re actually in a pair of Nike Lunar Safari Fuse today, rather than a high top basketball shoe.

[laughs] Yeah. These are comfortable. Great travelling shoes, so I usually wear something like this when I travel. 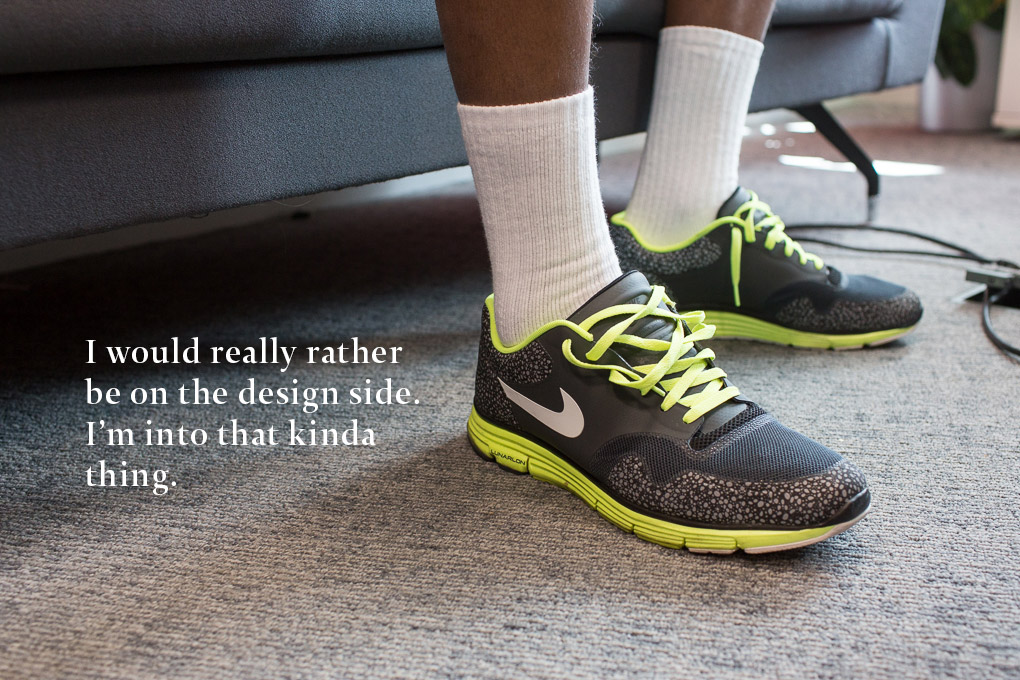 I spotted a pair of Air Max 95s in that picture from 2011 as well. Over here, the fashion has always been predominantly running shoes because we simply don’t have the basketball culture that you guys do in the USA.

Yeah completely. Out of interest, why do you think basketball hasn’t taken off so well over here?

I think it’s because football is just so huge. It’s more than just a sport, it’s a lifestyle, so I think it will take a lot to top that. And obviously it’s so far away. With the time difference you don’t really get to see too much basketball, so I think that all goes into it.

In general, American sports are gaining a lot of popularity again over here at the moment. There’s even talks of an NFL team being relocated to London. With the NBA continuing to increase its focus on the EU, do you ever think we’ll see an NBA team relocate over here?

Umm it will be tough with the travel, but I think it would be fun. It’s always good to see different cultures, obviously. We expanded to Toronto and before I was in Vancouver so I don’t see why not.

Back to the game – What’s your all-time favourite sneaker to play in?

I’d say a Hyperfuse. They were the most comfortable shoe ever and it’s all about comfort with me.

Have you played in the new one yet?

And what about off the court? I’m guessing it’s Jordans if you’re saying they were high up on your collecting list. Which one’s your favourite?

Nike recently announced that they will be taking over the on-court kit for the NBA in 2017. Is that something you’re excited to see?

Yeah it is. For the past couple of years adidas kind of had their way with whatever, shooting shirts, jerseys… I’ll be excited to see what Nike does.

Do you think or do you hope that they’ll roll back on the sleeved jerseys?

[laughs] I hope so! I hope so. They’re ugly. I haven’t played in them, but they’re ugly [laughs].