Warning: "continue" targeting switch is equivalent to "break". Did you mean to use "continue 2"? in /nfs/c08/h04/mnt/122689/domains/thedailystreet.co.uk/html/wp-content/plugins/wp-author-box-pro/includes/ReduxFramework/ReduxCore/extensions/customizer/extension_customizer.php on line 442
 How Quiksilver revisited their roots to find their future I’m going to hedge my bets and suggest that many readers of this feature were the kid that received a Quiksilver hoody for Christmas, off a slightly out of touch Nan, hopeful Mother or otherwise. I was definitely that kid. For years, amongst Flip Sorry VHS, Kelly Slater video games and Birdhouse decks, my board sport loving adolescence was one that was also subjected to the receiving of the odd Quiksilver hoody.

As a brand, Quiksilver has been ever-present throughout my life. I’m 25 and as far back as I can remember Quiksilver has had a retail presence in every city I’ve lived, held sponsorship within the video games I played growing up, and has also managed to stay on my radar, with my Dad owning one too many “Mountain and Wave” logo T-shirts as he crept into his fifties. Surely this is a good thing from a brand perspective though, right? As a brand, Quiksilver has been everywhere, it’s been everywhere all the time, tapping into markets from fifteen-year-old board fanatics to dads that missed out on those significant barrel riding years of youth now passed. Quiksilver’s presence, although apparent, is one that for many years may have been perceived as wayward. Much like the care free lifestyle the brand has built it’s foundations upon, the Quiksilver brand identity had become aimless. From what began as a humble, core surf, board short innovator, Quiksilver today has become a global powerhouse that churns out thousands of products, segregated across a variation of lines, aimed toward satisfying everybody from fourteen-year-olds entering the world of surf for the first time, to the old boys who have seen it all before. This mass appeal that Quiksilver were so set on delivering seemed to be to their detriment, as on September 9th 2015 the brand announced filing for Chapter 11 bankruptcy. It is worth noting however that bankruptcy is something that, more often than not, conjures up images that are far from the reality of the situation. Honestly, Quiksilver’s decision to act in such a way was the first positive sign of the brand’s willingness to reassess and restructure the business as a whole. This restructure is one that, during my time spent at this year’s Quiksilver Pro France, was totally apparent. It was laid bare. My preconceptions were that any talk of the ‘B’ word would be brushed under the carpet, never to be talked of — especially around the press — but I couldn’t have been further from the truth.

The South West Coast of France is an area of Europe that’s lauded by surfers as a haven of consistent swell and sand breaks. Saint-Jean-de-Luz (an area just South of Hossegor and home to this year’s Quiksilver Pro) is a French commune synonymous with surfing and more specifically with Quiksilver itself. Though the brand’s roots originate in Australia’s small Southern coastal town of Torquay, it’s European life blood is here in the Basque province of Labourd. It’s a brand that has brought a lot of employment to the area, but more than these opportunities, it’s a place where Quiksilver is a passion. Quiksilver represents a culture and ethos here that, to the masses, may have been misplaced as the brand continued to grow into an almost unrecognisable global power. It’s the employees of Quiksilver in this otherwise sleepy region that are the shining light in respects of Quiksilver’s future, and it’s very clear now that the brand’s overall willingness in discussing the somewhat patchy recent events is more importantly followed by a knowledgable and concise idea of what has to be done in the future — to re-establish and realign the famous ‘Mountain and Wave’. 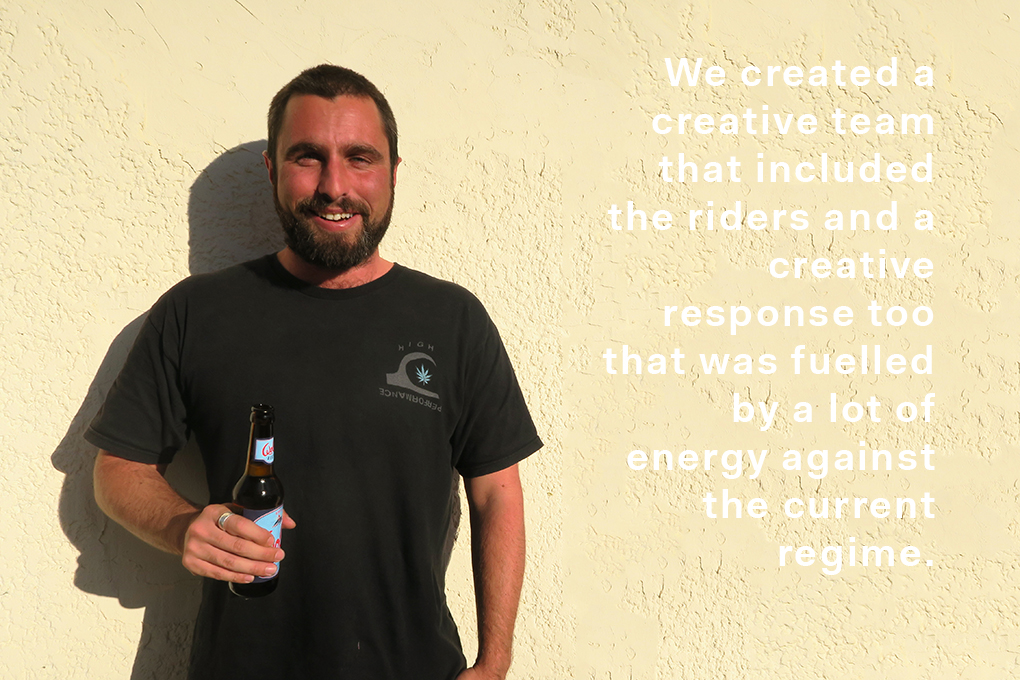 No man or women I talked to during my four-day stay in Saint-Jean-de-Luz managed to influence my opinion on Quiksilver and the brand’s “new beginning” more so than Josh Rush a.k.a. ‘Rushy’. The Australian native, born and bred in the same small town that the brand’s roots lay, is Quiksilver’s Global Creative Director. Aged just 30 years young, it was startlingly evident that Josh’s passion wasn’t just about being in the water but the surrounding cultural aspects of the sport, something that the brand may have perhaps lost it’s way with up until this point. It was obvious that we were visiting Quiksilver at a moment in time where their trajectory was realigning, and again the tone of honesty used to explain the process up until now and the plans going forward was incredibly refreshing.

The goal for the brand during this period was to regain a sense of personality, as Josh explained:

“We talked about getting this personality back into Quiksilver. A lot of that comes from art direction and a bit more of a youthful attitude, but we created a creative team that included the riders and a creative response too that was fuelled by a lot of energy against the current regime. If you look at the range in store now, ‘Radical Times’, it’s incredibly raw, so much so we’re surprised that a lot of it got through. A lot of what you see in store now is really honest and tongue in cheek, taking the piss a little too.”

Establishing what he wanted Quiksilver to look and feel like was Josh’s first challenge, but as this new iteration of Quiksilver’s original personality started to become evident through the ‘Radical Times’ collection, it was then about taking it to the next level and continuing to create new art and new stories. The talk of stepping away from the retrospective nature of the brand was an ongoing theme. In producing product that, for example, would have previously offered old prints, Josh wanted to focus on the aspect of travel and experiences to really pull forward Quiksilver’s ethos and passion to the present. 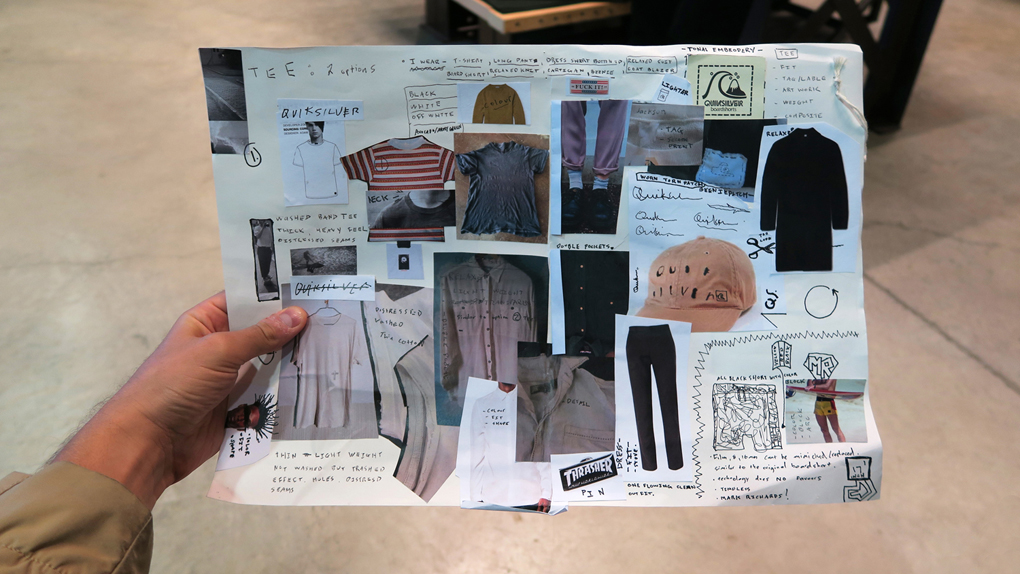 Across the four days on France’s Southern West coast, myself and Josh spoke about the travel focus that he’d integrated into the brand’s newfound creative process. With Brazil the first destination of his list, he explained to me that he’d briefed a local creative agency to help him uncover an incredibly raw serving of what Brazil had to offer — no holds barred — in an attempt to curate a well-rounded process that aimed to extract the culture with a view to re-ignite the strong ties that surf and travel historically have. With the collections going forward being split into A.M and P.M sections, coming across through the diversity and splits of colour, prints, tone and overall mood of the product, Brazil’s trip mirrored this by including visits to the “sketchier” side of the city (PM); Favelas, Red Light Districts, Bale Funk Parties, as well as the A.M, which was a lot more beach and surf focused.

With a methodical re-approach to creating product, Josh’s key aim was to gather as much content as possible that spanned imagery, artwork, music, and culture, so that Quiksilver could begin to produce new and unique prints that are truly centred around real people and that aren’t plucked from Google search engines. The majority of this content however, as expressed numerous times throughout our conversation, was for internal purposes, with the majority of references seen on the customer facing side of things only featuring on the finished product. In curating this legitimate pool of creativity and life experiences for riders and designers to pull from and relate back too, Quiksilver are beginning to establish themselves and bring back an albeit modern understanding of what the original entity of the brand was over 60 years ago. It seems ironic that in a time where the presence of the internet allows brand’s to project a lifestyle — sometimes falsely — onto the world via social channels, blogs et al, Quiksilver lost it’s way. Perhaps that goes to show the sheer size of the company and it’s inability to look beyond itself. However, with it’s legitimate standing as a brand that is involved and invested heavily in Surf culture globally, and with Josh Rush’s creative direction steering an otherwise previously wayward ship, Quiksilver’s fresh approach, within a market so littered with brands that claim to support surf culture, is one that has the potential to not only shake things up, but dominate. Patta x Bobbito by Josh Parkin for The…

Interview: Damion Silver on the Chuck II and…

Nike to become the official on-court uniform and…

Interview: Greg Lucci talks about the foundations and…

Odd Future has no future