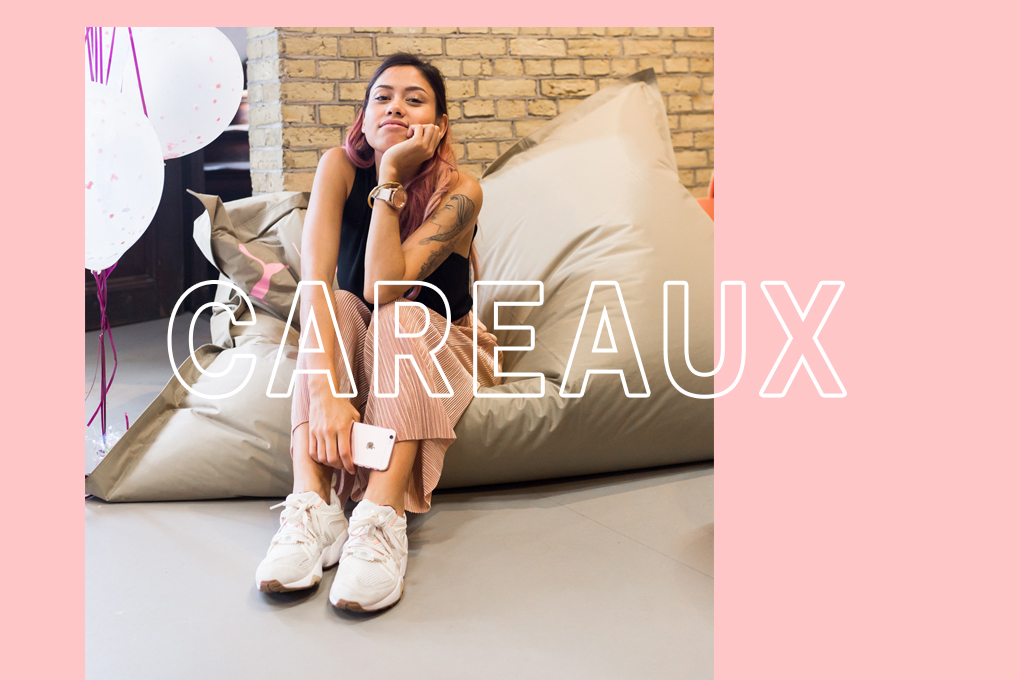 In this new age of collaborations, PUMA’s latest collaborative partner is one of our longtime friends, Careaux. We headed to Amsterdam to chat to her about the dark times that inspired her work, and how she’s gone from illustrating sneakers to making them.

It’s not often that you get offered the opportunity to interview a friend of yours, so I wanted to take advantage of the fact that Careaux and I already have a relationship and simply hit record and see where the conversation took us. To give you an idea of how relaxed our “interview” was, let me set the scene – other than the dictaphone, this was a catch up between friends while one (not me) got their hair dyed and cut. Along with that situation came an honesty and an open nature from Careaux that led us to talking about her father’s involvement in a car crash and how she made positivity from one of the darkest times in her life.

With a lot of today’s exposure being through Instagram and similar platforms, it’s easy to judge someone’s work, or the person themselves, with little to no understanding of the thinking behind it. Instagram is an almost entirely visual platform after all. While watching the boom in “sneaker art” a few years back I always had a gut feeling about each and every new artist I came across – I either respected what they were doing or I didn’t respect it at all. That wasn’t down to their style or execution other, or how they were marketing themselves, in fact I could rarely put my finger on exactly what it was at the time, I just had a gut feeling about wether it was art or imitation. It’s something Careaux and I touched on in our conversation and she may well have answered my old conundrum – some people were making art as an expression, coincidentally combining it with their passion for sneakers, whereas some people wanted to get involved in the “sneaker art” movement. I guess that’s it. Anyway, Careaux was one of the first in the new generation of artists exploring sneakers and she consequently became one of the biggest. It’s a unique kind of rags-to-riches story where she has gone from illustrating sneakers that she admires so much, to making sneakers that the next generation will admire. 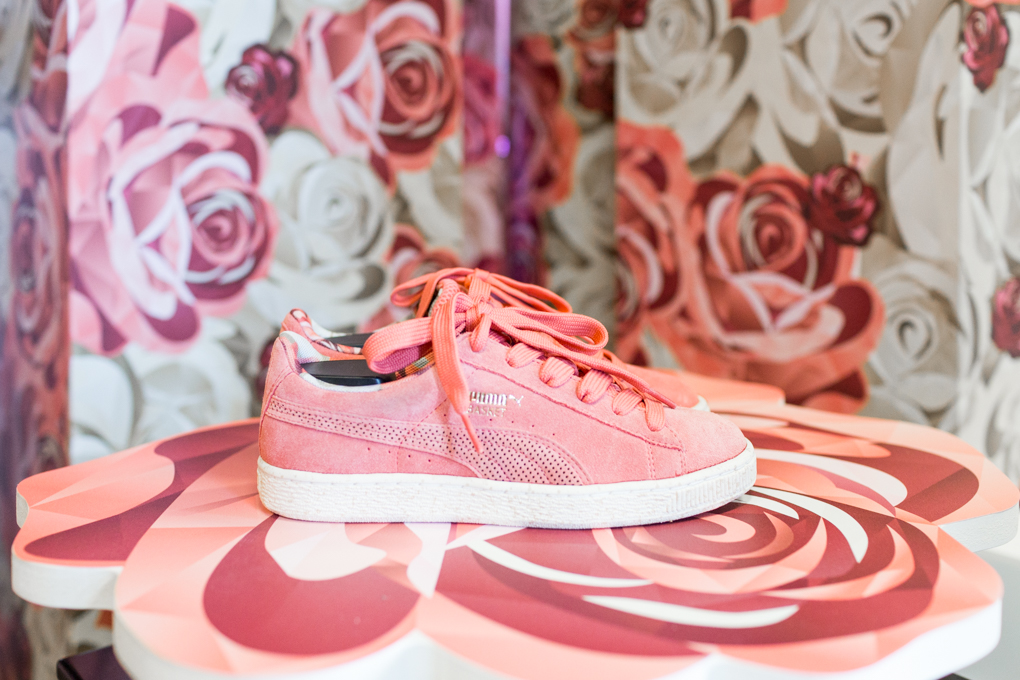 It’s been a while since I last saw you. How you been? What you been up to?

I’ve been busy! What have I been up to? I’ve been really busy, not with only PUMA but also Filling Pieces.

What exactly are you doing with Filling Pieces?

Since last year I became their women’s footwear designer, their first one, since they found out that like 25% of the sales was small sizes between 35 and 39. So they were like “OK, so there’s girls who actually want to wear Filling Pieces but we don’t really have girls shoes” so I started working with them and I’ve been working with them since last year.

I have no idea because we just released the first drop of Filling Pieces, so I have no idea how it’s going with girls and the shoes, but I think it’s OK. I don’t know.

And in terms of the PUMA collab, when did that begin? That’s been in the pipeline for ages now hasn’t it?

Umm it was even in 2014. Yeah, so I was at Sneakerness in Paris and before I went there I announced on Instagram that I was selling my canvases and that people could pre-order it and I would bring it to the show in Paris. So I did that and I was there and Yassine of PUMA came up to me and he was like “Hey, can we have a chat?” and we were talking about shoes and all that and he was like “How do you feel about your own collaboration?” and I was like… I didn’t really take it serious, you know? Because I was just someone. I was like “OK! A collaboration!” I didn’t hear anything from him for like 6 months or something and then he suddenly emailed and was like “My assistant is going to fly you over next week. Be ready” and I was like “WHAAAAT?” So I went to PUMA and I worked there for two days in their office and yeah, it basically went really quick. I actually knew already what I wanted.

So you did the collection in two days?

Basically. Yeah, well that’s what I did. You make what you want. I’m really quick with Filling Pieces as well – I can make 100 shoes in a day. But not everything can come out as you want it. First we had our samples for PUMA, I cannot remember when it was, but from there I decided if I wanted to keep it or not and yeah we had to change stuff because even though I made it on my computer and it looked really good, samples were like “Uh oh!” so we had to change stuff obviously. 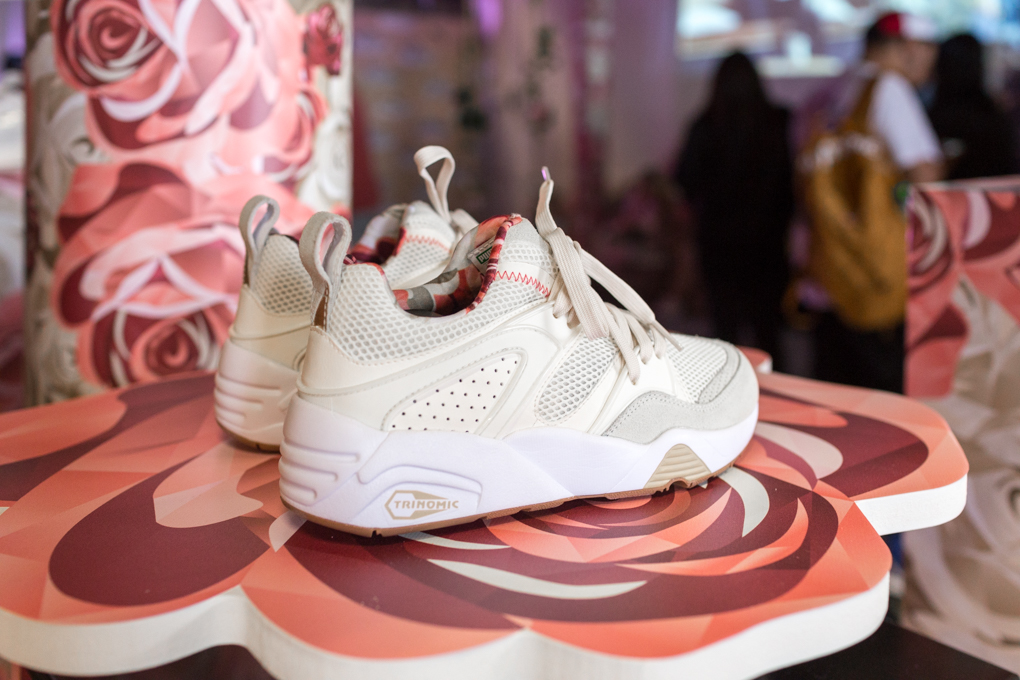 That must have been the first shoe you designed properly, right? I mean you’ve done a miadidas ZX FLUX before…

Yeah, but that’s different because I just gave them the pattern and they printed it. What was that app again? mi ZX FLUX yeah?

Where did it go? I have no idea where that went. But yeah, basically this is my first real collaboration shoe or whatever you call it.

The collaboration is more than a shoe though. It’s pretty extensive for a first project.

It’s not a Basket?

No, it’s not a Basket, it’s a Suede. It was supposed to be a Basket. I picked the Basket because I didn’t want to have the suede actually, but yeah, now it turned into a Suede.

The collection revolves around your Dedication Flower design, which I know has a personal story to you. Could you explain that story, if you feel comfortable telling us?

It’s alright, I don’t mind explaining it. Where shall I start? So my Dad had a car accident in 2013. He got into a coma and while he was in a coma I was just waiting for him to wake up, so I didn’t go to school and all that sort of stuff. School didn’t really support it because before that I’d really fucked up school anyway, already, so with this kind of story they were like “You’re not working hard enough anyway and blah blah blah.” They were just rude. So I just didn’t really give a fuck about school. I ended up working in the hospital with my MacBook and that’s when I started my illustrations of sneakers. 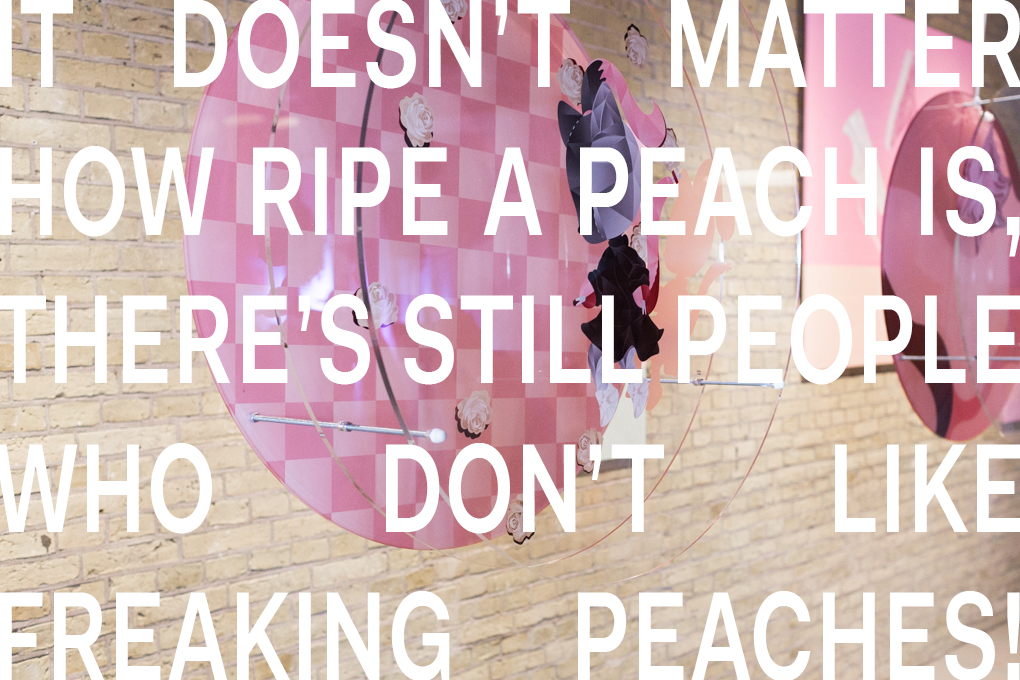 Oh really? That’s when you began?

Yeah. So it started there when he was still in a coma, but I never posted. I started posting it a few months later after he woke up. So he woke up and that’s when I started working with the flower because I saw the flower as something that’s reborn or something like that. Basically that’s the same thing that happened with him. That’s how I looked at it.

So basically, that’s where the rose comes from. It’s a pretty long story, but yeah, that’s a little bit of it.

It’s good to get that insight though. Because you came up through Instagram, like most young creatives do today, a lot of people don’t hear the stories or thinking behind your work and you do get negative comments like you did back in the day along the lines of “It’s just triangles. It’s nothing special”…

… when in fact there’s actually a whole thought process behind your work.

When people actually know the story behind it, then most of them are actually more human and start to understand I guess, but some still aren’t. It doesn’t matter how ripe a peach is, there’s still people who don’t like freaking peaches!

So true. Please tell me that’s your own quote. That’s too good. 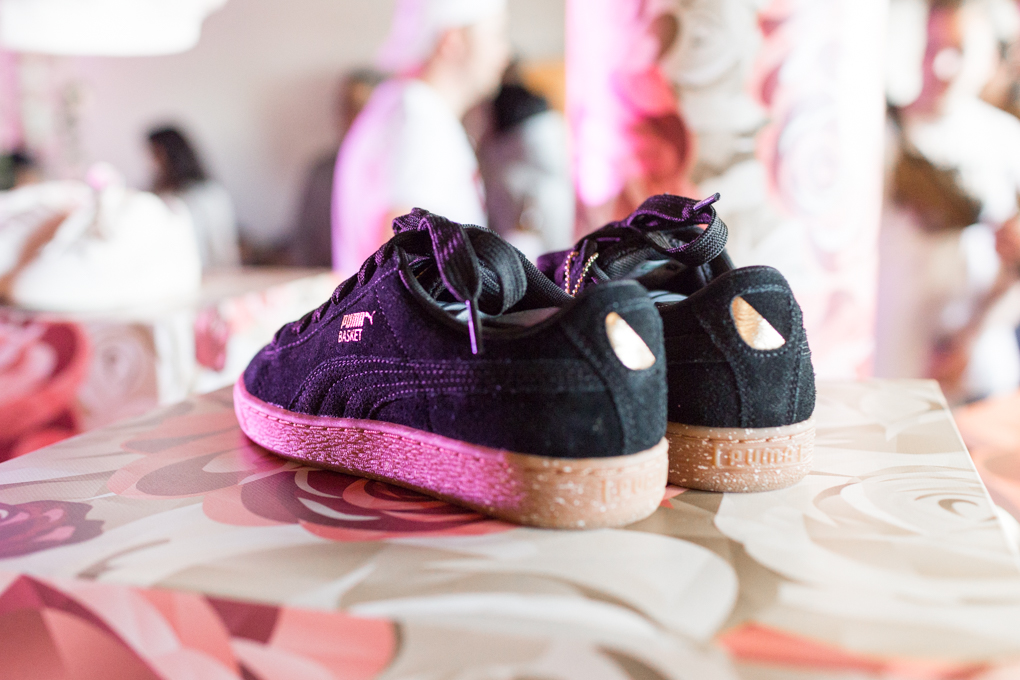 The shoes themselves are really minimal. You haven’t put the gradient on them or anything like that. Is it because you felt you were in a different place when you made them?

I didn’t really think about a gradient in it. I wanted to, but I was looking at the other collabs that had been before, so I didn’t want to copy things that already existed, like Ronnie [Fieg] uses the toe colour and Sophia [Chang] had the gradient sole. So those are already things that I really didn’t want because I didn’t want to look like them.

Is it hard designing shoes in general, with so many coming out now, to make something unique?

There was a couple off years recently where it seemed that if you weren’t one of the top 10 global stores, you weren’t getting a collab, and those stores were releasing at least one almost every month.

It’s an interesting point actually because you’re probably one of the few artist collaborators in sneaker culture today.

The last one was Sophia. As an artist. AND with PUMA. All the other collaborators with PUMA were stores or brands.

Yeah, I think with the main two or three sneaker brands, to collaborate you’ve either got to be a store or a fashion designer at the moment.

So are you working on more stuff with PUMA or is this collection a one off? 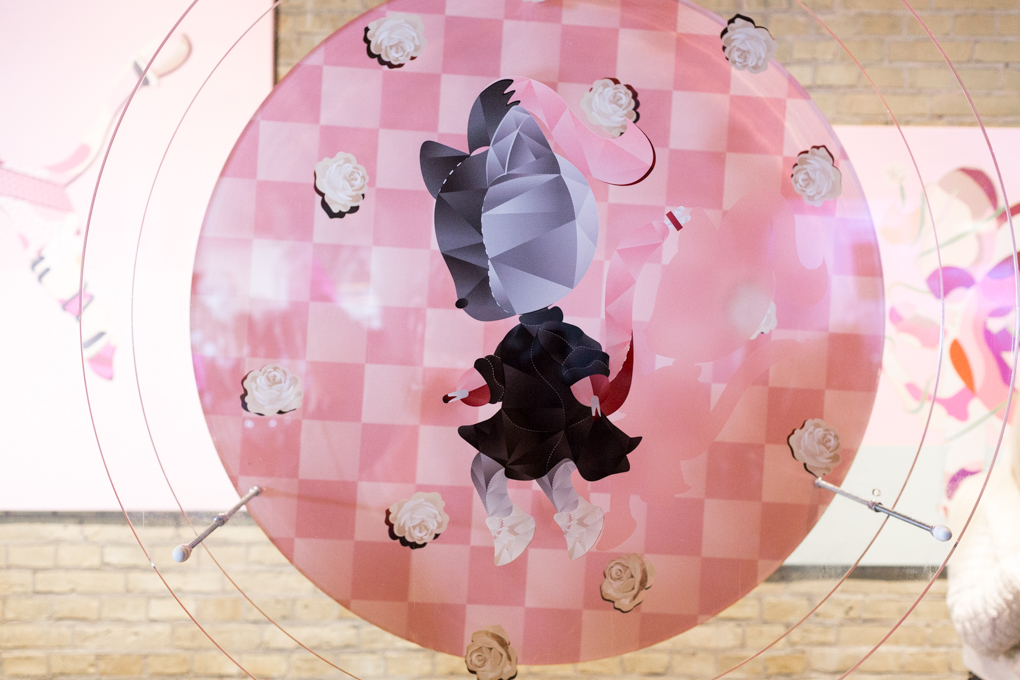 And are you still making art?

When I have time. But so far I have been really really busy with Filling Pieces, so not really.

I guess from what you said earlier, it needs to come from somewhere, it can’t just happen.

Yeah, basically most of the art from me, that comes from me, was from when something happened. So when I first started with the sneaker illustrations a lot of hate came my way, you know? And every time when I saw stuff on the internet I was just like “OK, screw the internet, I’m gonna illustrate a shoe” and then the next morning I had a shoe to post.

That’s interesting because a lot of people hold Instagram up as this great thing, this great platform for people to get famous quickly and put their work out there…

I think on a global scale, yes you did. It’s how most people get known. But you were very active in your local scene and that’s probably the difference. Instagram is very easy for kids who actually just sit at home…

Yeah and who make a million dollars with like five Instagram posts. I mean, some girls get 5,000 per post like “Bruh! The only thing you do is standing in a freaking bathing suit!”. That’s the thing with me – if I got free shoes, then I always gave something in return, I always made an illustration for the brand, or the store, or posted on my Instagram and gave them exposure but I never asked for anything.

Do you think that the environment on Instagram has changed substantially over the last couple of years?

Do you think it’s still possible for people to break through like you did?

But, I cannot compare myself to others because I grew bigger because of my illustrations and people who follow me nowadays, most of them don’t even know I started with that, they’re just like ”Oh that’s the girl with a lot of sneakers and nice clothes and she travels a lot” but they have no idea why I am travelling and why I am doing all this sort of stuff. They have no idea because they weren’t there in the beginning. You were there in the beginning, so you know why I started and where I started. Some people don’t have any idea.

Does that illustration work you started with still have influence on what you’re doing today?

I dunno actually. If I would show it more then yeah, I hope so. I hadn’t really thought about that. I dunno, maybe everything is about materialism.